“In the fall, the fish are keying on shad; that’s pretty much what fall fishing revolves around,” said 2019 Bassmaster Elite Rookie of the Year Drew Cook. “A popper is a really great way to fish targets.

“It’s not like a walking style bait where you throw it up there and 3 seconds later, you’re out of strike zone. You can throw a popper all the way up to rock, or a tree, or whatever you’re targeting and pop it, stop and the bait stays in the strike zone a lot longer than a walk-ing style bait.”

Cook’s a big fan of poppers and he’s liking the new SPRO E-Pop that was introduced at this year’s ICAST. This 1/2-ounce 80 mm bait has the same characteristically concave face, which produces the classic surface disturbance, while it’s lengthy profile allows it walk like a stick bait.

“The E Pop is a hybrid – it’s larger than most. You can throw it up there, pop it three or four times and then walk it back to the boat,” Cook said. “Also, you can throw it far, which is good for when you’re around schooling fish.”

Whatever popper you choose, Cook’s advice applies across the board.

Gear in the rear 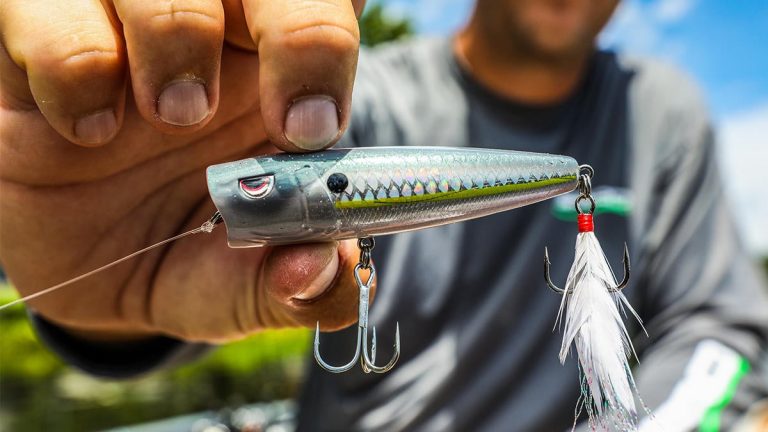 Bait colors may come down to personal preference, but Cook says you always want a “dressed” rear treble. Contracting and flaring on the retrieve, those alluring accessories – synthetic or natural – also help sell the ruse between pops.

“People often think that they have to pop (the bait) for anything to happen,” Cook said. “The feathered hook does more than you’d imagine. When you stop the bait, that feather flares out; it’s always moving.

“It’s a subtle thing that drives the fish crazy and they have to eat it. That’s why a lot of times, you’ll get a bite on a popper whenever you’re not moving it.”

“In the fall, plain white works the best, with some colored accents like blue and red, or chartreuse for smallmouth,” he said. “I’ll put little different things in there; like, if I have a bream color popper, I might use a wood duck feather and put some Mylar in there.

Like most baits, the fish will show you what they want from a popper each day. Cook typically starts with a pop-pause just long enough to let the rings start to settle, then he hits it again.

If the bite is slow, he may allow 3-4 seconds between pops, but all the while, he’s watching for window shoppers.

“If you ever have one roll beneath your bait or boil, give it three to four little twitches,” he said. “It looks like a bait trying to get away and they’ll crush it.

And don’t hesitate to pair a popper with a walker or a buzzbait.

“This a great follow-up bait,” Cook said. “If you have one blow up and miss your bait, you can throw a popper in there and you don’t pull it straight through the strike zone. Pop it once or twice and 9 times out of 10 they’ll eat it.”

The frog’s also a better option for reaching into tight areas like docks or the shady pockets beneath overhanging trees.

“You can’t skip a popper, but you can skip a frog,” Cook said. “And if you throw a little high and your frog gets hung (in the tree foliage) it’ll come back out better. Treble hooks don’t come out as easily.”

Cook throws his popper on a Dobyns 705 Champion XP with plenty of backbone, but the right amount of tip for accurate cast. He’ll likes 14- to 20-pound Seaguar monofilament on a 7.1:1 reel.

Cook said this is all about comfort: “I like a smaller size reel because most of the time, you’re not throwing far; you’re throwing at targets, so want it to be comfortable in your hand.”

He’ll sling his popping frog on a Dobyns 734 Champion XP with 50-pound Seaguar Flippin’ Braid on a 8.5:1 reel. The high speed helps him better manage the pace of a frog bite.

“A lot of times, when they come up and eat a frog, they’ll come to you or swim sideways and they do it pretty quickly,” he said. “With a popper, they’ll just come up and suck it in; but when they eat that popping frog, they crash it and they’re going somewhere, so you want to be able to pick up the line and get a really good hook set.”

With popping hard baits, the hook set and landing is pretty straight forward: Once he comes tight, just reel until he’s close enough to net or scoop. As Cook notes, popping frogs require a more aggressive hook set, along with a healthy dose of discernment.