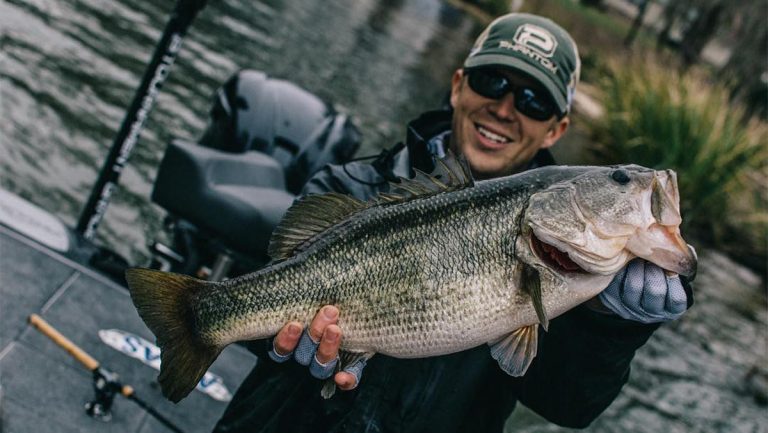 Fishing a hollow-bodied frog is one of the most exciting ways to catch giant bass. Whether you’re fishing from a boat or simply from shore, there’s plenty of frog-fishing action for every angler to enjoy. I can’t name a single red-blooded human being who doesn’t smile ear-to-ear when a big bass explodes on their frog.

It’s been interesting, however, to see how many misconceptions have been formed about this effective technique. I was talking to my longtime friend and Elite Series pro Patrick Walters a few weeks ago and we got on the subject of frog fishing. He got a little fired up because in his opinion, anglers simply aren’t using the frog to its full advantage. After our conversation, I have to admit—he made some darn good points.

I’ll let you in on our conversation and give you a look inside the mind of one of the best shallow-water anglers on tour.

Misconception No. 1: You have to fish it around cover 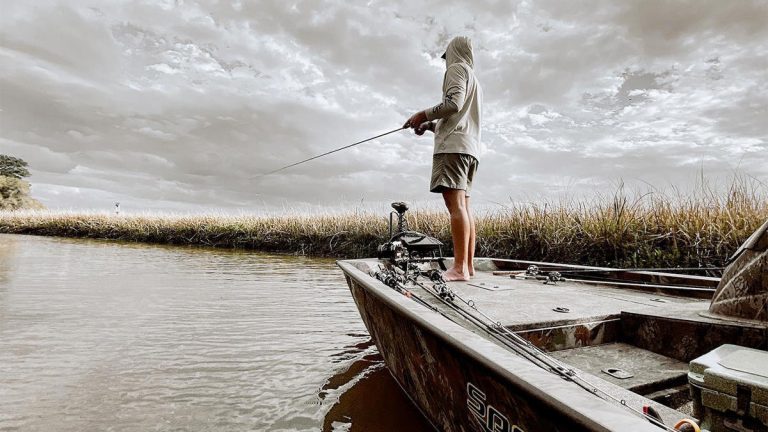 When most folks think of frog fishing, visions of aquatic vegetation flood the mind. While this is certainly a great place to find success on your favorite frog, it’s certainly not a necessary ingredient. Exclusively targeting grass or other shallow cover with a frog can considerably decrease your chances of catching big fish.

“You absolutely do not need cover to catch big bass on a frog,” Walters said. “You’ll run into this situation a lot when you’re fishing shallow flats in both the spring and the fall. You can be fishing in just a foot of water and other, more traditional lures like a spinnerbait might disturb the area too much; those shallow-water bass are super finicky. It could also be a muck-covered bottom that won’t allow you to drag a bottom-contact bait. This is when the frog can shine in totally open water.”

Because bass prefer to feed “up”, meaning they prefer to attack prey from underneath, Walters says you can get some giant strikes without a single piece of cover in sight. The fact that open-water bass don’t always see a frog can help you capitalize on their unfamiliarity.

“Fish don’t see a bunch of hollow-bodied frogs in open, shallow water,” Walters said. “They see the same ol’ stuff every single weekend and I definitely believe they become conditioned to it. The next time you’re fishing between boat docks or covering a fairly barren stretch of bank, take that frog out and keep it in your hand. You’ll be pleasantly surprised.”

Misconception No. 2: You have to use a broomstick to throw ’em 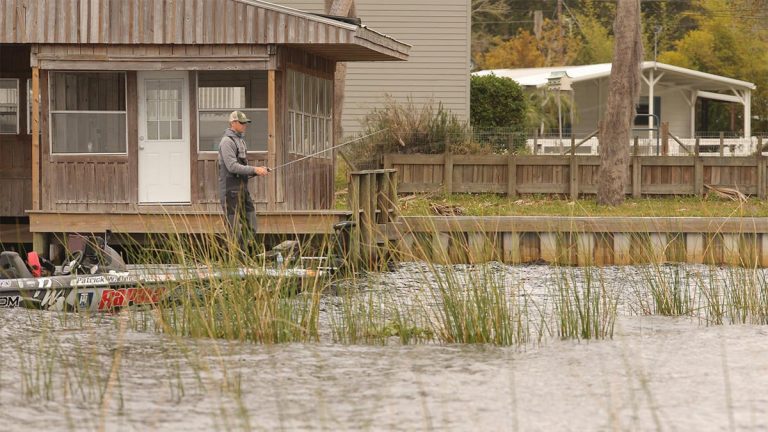 Even as soon as 15 years ago, the large majority of anglers believed it was necessary to use a heavy-action flipping or pitching rod when fishing a frog. It was a foregone conclusion that you needed a broomstick-type rod, huge braided line and a monstrous hookset to seal the deal on a frog bite. This technique was believed to be close-quarters combat at its best.

Walters, however, thinks just a little bit of finesse can go a long way.

“It’s important to think of the advancements in technology these days,” Walters said. “For instance, I choose to fish with the Terminator Frog lineup and they are so much better than when frogs first hit the scene. The Terminators have a super-soft body, incredibly sharp VMC hooks and they walk like a dream. So that kind of takes away the need for a heavy-action rod in most situations.”

According to Walters, a softer frog rod can not only double your casting accuracy, but also significantly increase your casting distance and ability to softly place the frog in precise areas.

“If you’re using a broomstick rod, your frog is going to sound like a belly flop when it lands most of the time,” Walters said. “So if you’re casting in just a foot or two of water, that hard landing is going to spook any nearby bass. With a softer rod, however, I can skip my frog and quietly slide it into very small areas.”

Admittedly, it is kind of tough to find the “perfect” frog rod because every angler has a different preference. But Walters likes the 7-foot, 1-inch Daiwa Tatula Elite heavy-action casting rod for the job. I’ve also been testing this exact rod for frog fishing and from what I’ve seen over the past few months, it’s awfully tough to beat.

“The Daiwa Tatula Elite models have a good bit more tip than you might think,” Walters said. “That’s because professional anglers designed them all and were very meticulous throughout the process. Although the frog rod I like to use says ‘heavy action’ on the blank, I like to describe it as more of a magnum medium-heavy, if that makes sense. It’s absolutely perfect for fishing a frog.”

Misconception No. 3: You need to have a bunch of different colors

The large majority of anglers, myself very much included, have a tendency to overcomplicate techniques and presentations just for the sake of overcomplicating them. We’ll often take a very simple concept and attempt to turn it into some variation of rocket science. When it comes to fishing frogs, however, it’s imperative to keep your color selection as simple as you possibly can.

“It’s easy to not get bit for an hour or two and blame it on the color,” Walters said. “But the more you change colors and overthink things, the easier it is to get completely spun out. I literally throw three colors in the Terminator Frogs, no matter what. I’ll throw solid black in cloudy skies or dirty water, solid white in bright skies or around a shad spawn and my go-to throughout most of the year is a bluegill or green pumpkin color. That’s going to be your fail-safe color, in my opinion.”

Bass fishing can quickly turn into an expensive hobby if you’re not mindful of your bank account, so as you’re getting prepped for the upcoming frogging season, don’t go overboard when you’re making a purchase. If black, white and some sort of green pumpkin or bluegill pattern won’t get bites, you might not be in the right area. Just remember to keep it simple.

Misconception No. 4: The action will always be hot and heavy 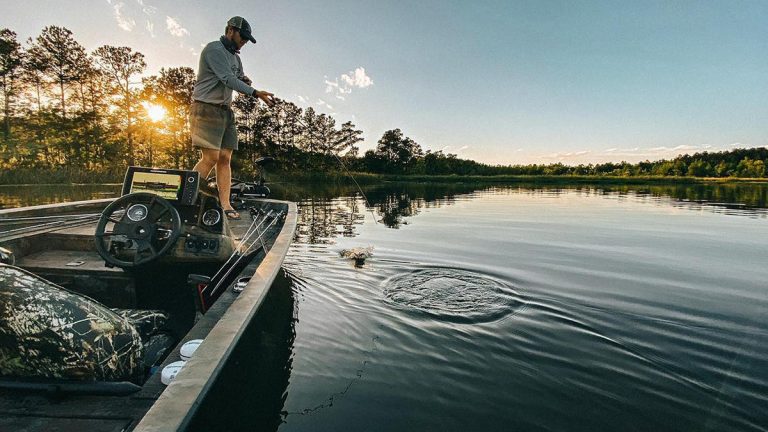 Frog fishing is a funny thing, to be quite honest. On very rare days, it seems like every fish in the lake wants a shot at your frog. But on most other days, however, it’s not a big-time quantity bait. You have to exhibit a certain level of commitment to the frog if you’re searching for big bass.

“Frogging is kind of like swimbait fishing in a weird way,” Walters said. “You can’t just pick up a frog for an hour and expect to catch a 20-pound limit. It’s an incredible way to catch huge bass, but it can make you work for ’em. You’re going to have to grind a little bit and be stubborn when you’re looking for frog bites. You might not catch 30 fish a day on it; you might just catch 3. But when you do get a bite, it’s going to be an absolute tank.”

“A frog is a staple all of the time for me, but especially when I’m fishing a team derby with my dad or with a buddy,” Walters said. “If one of you can stick with that frog all day long and get two or three big bites while your buddy throws something smaller for limit fish, you have a huge chance of winning the whole thing. Never underestimate the power of a frog for big bites. But again, you have to be patient and fully commit to it.”

The next time you go fishing, whether from a boat or the bank, make the decision to rig up a hollow-bodied frog. Don’t get caught up in all of the misconceptions, either. Keep these tips in mind and keep your thought process simple. If it works for one of bass fishing’s youngest professional phenoms, it will certainly produce some big bites for you too.