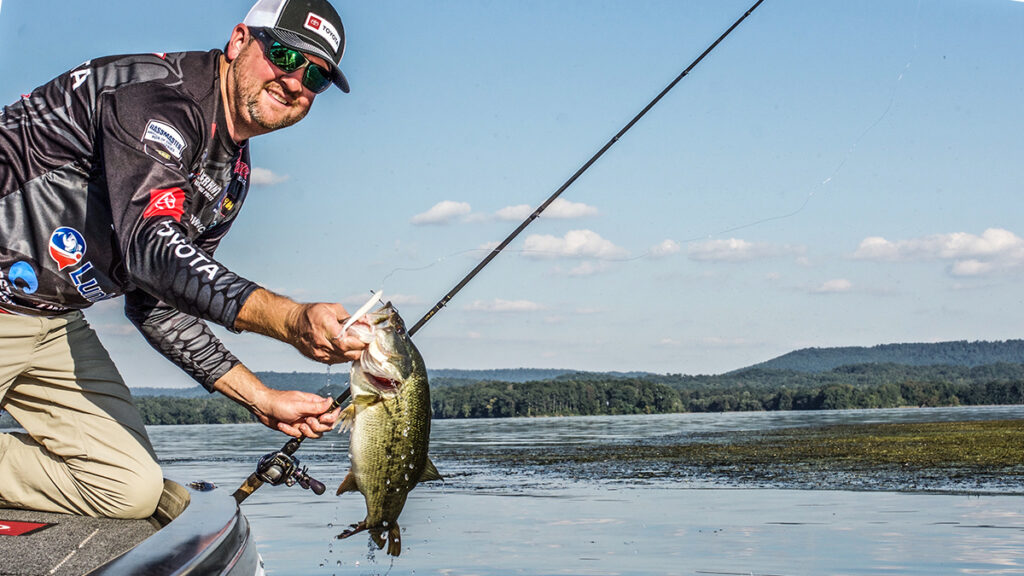 Fall bass fishing is here, whether the air temperatures reflect that fall feel in your area or not. The days are getting shorter, baitfish are schooling up and a large percentage of the bass in your lake are keying in on this seasonal transition. One tried and true, but easily overlooked lure that catches bass all over the country each fall is a soft jerkbait which is more commonly referred to as a Fluke.

These simple pieces of plastic may not be as flashy as some of the traditional fall staples, but they do a great job of imitating baitfish and are easy to use for anglers of all levels.

Team Toyota pro and soft-plastic jerkbait aficionado Matt Arey offered some insight into two patterns he’s made a lot of money on throughout his career using these Fluke-style baits. 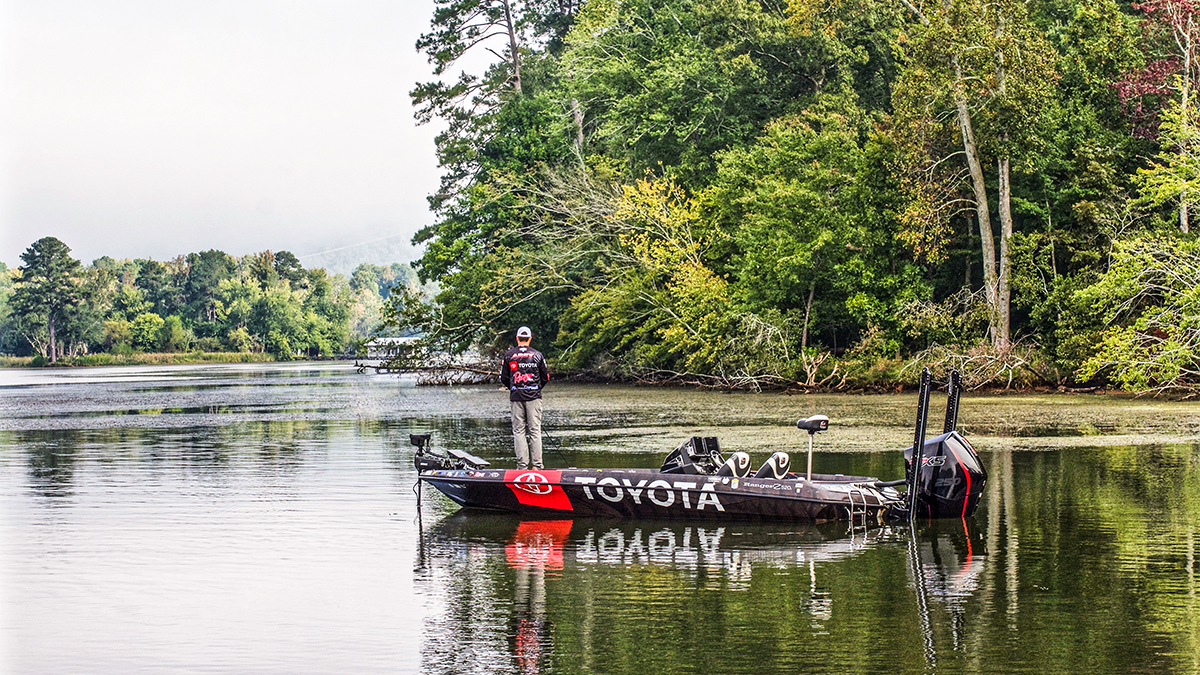 If Arey is fishing a body of water with vegetation in autumn, dead sticking a soft jerkbait near the edge of grass lines is one of his favorite ways to target fickle bass. Admittedly, Arey said he typically resorts to this technique after he’s tried power fishing through an area but isn’t getting the number of bites he expects.

Arey exploited this pattern when the Bassmaster Elite Series visited Lake Guntersville in the fall of 2020. Guntersville is notorious for heavy fishing pressure but Arey was able to dead stick his way to a solid limit each day and earned himself a $10,000 check.

“I was using a Lunkerhunt Descend Minnow because it has a salted core,” Arey said. “That salted core makes the bait a little more dense and gives it a bit quicker fall than other options. Though I have used several different brands of soft jerkbaits with success for this particular pattern. The bass were super finicky that week but I caught a lot of fish each day right behind other competitors.”

Arey casts his Descend Minnow near the edge of the grass and simply lets the bait settle for approximately five to seven seconds. What he’s doing is allowing the bait to slowly shimmy and sink to the bottom or nestle in the grass beneath the surface. After a few seconds, he pops the bait a few times with his rod tip and repeats the pause.

He continues this process throughout his retrieve or until he sees his line start swimming off. It may not be the most exciting way he’s ever caught a bass, but it works. Especially on pressured bass keying in on baitfish during the fall of the year.

“Shad and baitfish nestle into grass in the fall just like the rest of the year,” Arey explained. “On Guntersville last year you could see clouds of baitfish swimming in the grass, and every once in a while you’d see a bass blow up on them. But those bass have seen thousands of frogs and Texas rigged plastics on big weights. What they haven’t seen is a soft jerkbait darting around amongst them.”

Arey throws this presentation on a 7-foot, medium-action Lew’s Custom Pro rod and a Lew’s Hyper Mag reel. He tailors his line size and hook configuration based on the pattern but prefers 15-pound P-Line Tactical Fluorocarbon and a 4/0 wide-gap hook that he Texas rigs weedless when fishing around vegetation. 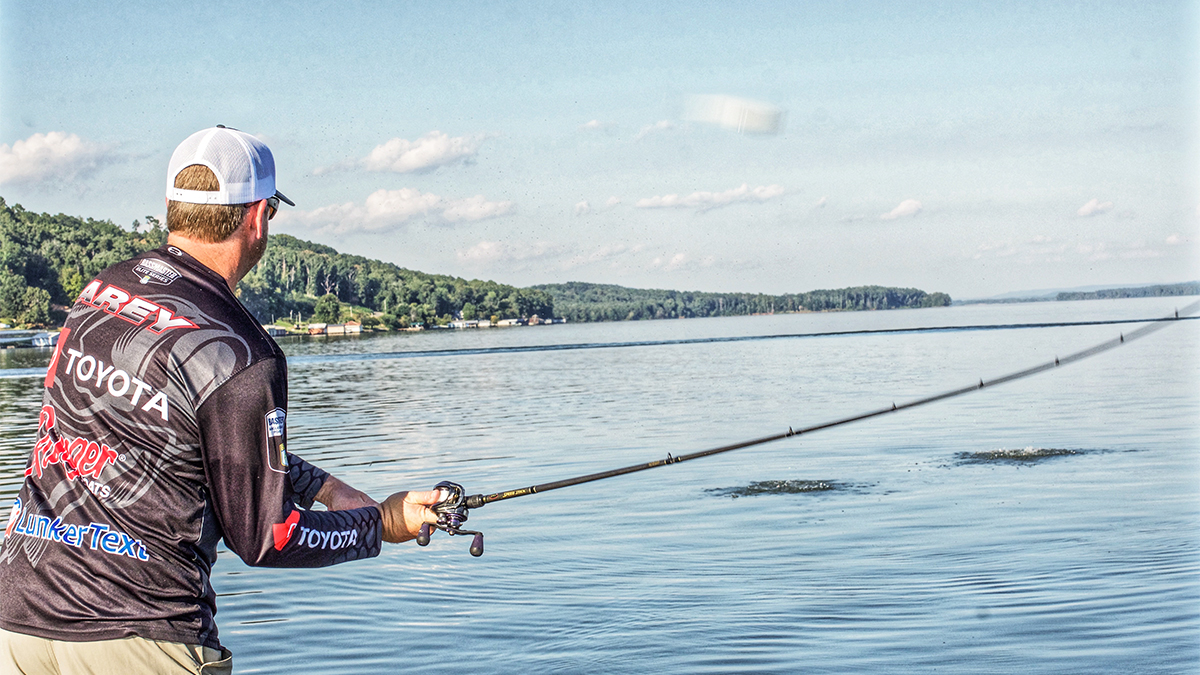 It’s no secret that soft jerkbaits are extremely effective at catching schooling fish regardless of the time of the year. This is especially well known where Arey comes from, where having a Zoom Fluke tied on 24/7 seems to be taught at age five. Outside of the Carolinas, a lot of anglers forget just how effective a Fluke-style bait can be when bass are feeding on baitfish high in the water column.

In the fall our focus as anglers turns to big, loud topwaters or other aggressive power fishing techniques. If you are faced with bass blowing up on baitfish but for whatever reason you cannot get them to commit to a topwater, few presentations are more consistent at triggering bites than a weightless soft jerkbait.

“I don’t care where you are… schooling bass in the fall will eat the fire out of a soft jerkbait,” Arey said. “To me the secret to a Fluke-style bait is its stealth. Soft jerkbaits are great baitfish imitators and they are super visual to bass but they are also sneaky. They don’t make any noise at all and offer a much different look than a aggressive topwater or spinnerbait.”

When targeting schooling fish in open water Arey makes a few critical adjustments to how he rigs a soft jerkbait. Starting with dropping his line size down to 12-pound Tactical P-Line Fluorocarbon and swapping out for a different hook size. Arey uses a 3/0 straight-shank hook and threads the lure on the hook, leaving the bend of the hook completely exposed out of the back of the bait.

This increases his hookup percentage and doesn’t seem to have a negative impact on the action of the lure as it darts around near the surface like a fleeing shad. The last closeted piece of advice Arey offered was to wrap a piece of thin lead wire around the shank of your hook when rigging for schooling bass. The wire adds a little weight to your setup and helps you make longer casts.

“Don’t think for a second I’m saying topwaters don’t catch bass in the fall; they absolutely do,” Arey offered. “I always have a walking bait on my deck this time of year but I also have a soft jerkbait rigged and waiting right next to it. They make a heck of a one-two punch!”

Remember these tips from Arey as you head to the lake this fall and don’t be afraid to keep it simple with a soft plastic jerkbait if the bass in your area are playing hard to get.