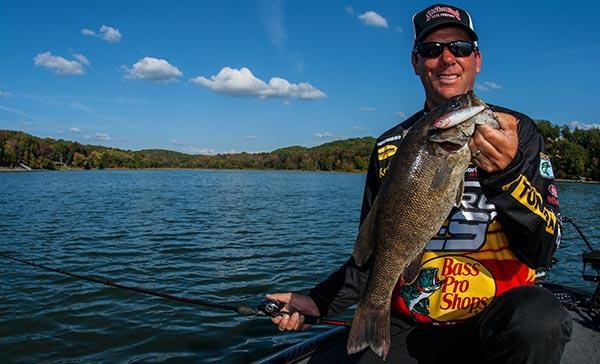 Any of us that have bass fished for a number of years like to think we’re a pretty good stick. Then we get in the boat with someone well beyond just being a good stick, and we’re humbled. If you’re a smart angler and you want to improve, then the best thing to do is tuck the ego and ask the angler to open up.

We’ve spent some time fishing with Kevin VanDam recently and picked his brain about how he is so much better at catching fish than your average angler. He decided to give us a quick lesson on triggering and reacting to fish as much as they react to an angler’s baits.

We motored around into a bay, quickly scouting the area. VanDam buzzed through the bay, looking at other anglers. One boat had a bead on some school bass busting the surface. VanDam scanned the scene intently and then turned to me and said, “I’d catch those fish.”

I have no doubt he was right.

We motored down the lake and pulled into another creek mouth with a large flat in the mouth of it. In a couple brisk strides he was on the bow, seemingly lowering the trolling motor while picking up a rod and casting and turning on his Hydrowave with a foot control. Effortless and fast, he was working a topwater bait, a prototype for Strike King he’s been helping develop for a couple of years. 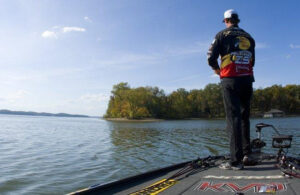 He works the bait across the flat and quickly reels it in and fires another cast just a few feet over. This time a big smallmouth bass comes up and rolls underneath the bait. He works the bait a few more feet and reels it in quickly. Then fires another cast. He works it rapidly, the bait jumping across the surface at times because it’s moving so fast. He kills it. Then starts walking it again. Another bass swirls under it and again doesn’t break the surface.

He reels in fast and drops that rod to pick up another. This rod has what he calls one of the most overlooked baits in fishing. His Quantum EXO reel was spooled with fluorocarbon and his EXO rod was bowed as he fired a Strike King Caffeine Shad into the fray. He jerked it quickly on the surface to move it into the area where the smallmouth had been striking. Then he killed it. Then he reeled his handle 5 fast cranks and killed it again. As the bait paused and began to sink slowly, a smallmouth flashed and rolled on the bait taking it down.

“People work baits too slow when the fish are aggressive,” VanDam said with that tone that makes you embarrassed thinking you’ve done it before. “They can’t stand it when you fire it through there fast and then just kill it.” 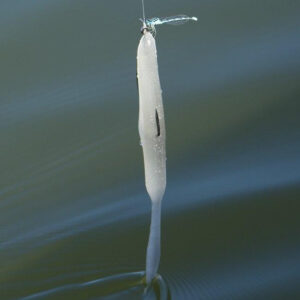 VanDam had a hand in the making of the Caffeine Shad, and while it’s not the first jerkbait ever made, it’s not like any other according to the all-time B.A.S.S. wins leader. And he was quick to demonstrate and prove his point, as he often likes to do.

“Watch how the bait swims when you crank it real fast,” VanDam said as he reeled the bait just under the surface. “See how it swims more like a swimbait. You can do that and kill it and really trigger the bass into striking.”

VanDam sticks with natural shad patterns on the Caffeine Shad but didn’t discount how effective colors like Watermelon Red can be in certain situations. He fishes the bait most of the time on a weightless Mustad KVD Grip Pin hook. That hook holds it tight in place while he works it really fast and erratic.

Because the bait is made of the Perfect Plastic and weighted heavily with salt, it casts amazingly well on baitcasting tackle, and a bit further if your initials are KVD.

VanDam continued alternating between the topwater and the soft jerkbait, and continued to force bass to show themselves. In moments he had fired the fish up and figured out how to make them bite where he could catch them. He ignored fish splashing and carrying on over deep water as they chased shad, instead focusing on those shallower fish that were chasing bait up onto the flat.

“Those fish over deep water are wandering and generally aren’t the better fish,” VanDam said. “I keep working the shallower area where the bigger fish have showed themselves and trigger them with fast erratic retrieves. I don’t want them to get a great look at it until I kill it.”

Speed and erratic retrieves are aspects many anglers miss. As we watched him work the fish, it was like he was two steps ahead of them, playing to their impulses. Where many anglers are just casting and winding, he seemed to will them to bite with the fast stop and go tease. It was like he was telling the fish to bite or he was going to take it away from them. And it seemed as he intersected one particular high spot on the flat he could draw a good fish to come in a take a swing at the bait.

If you’re out fishing and the fish are showing themselves but not taking the baits, try the one two punch. A subtle change in color, action, depth can often be what was holding a fish back. Speed up the baits and play a game of cat and mouse with the bass. Tease them with the baits moving it over their heads quickly and the follow it up with a slightly different bait and stop and go and pause it. And then let us know how and when it works for you.