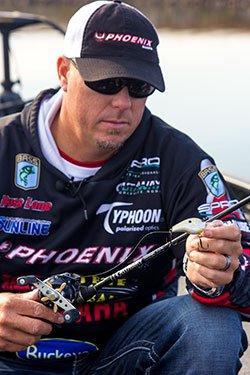 If you’re having trouble finding consistent populations of shallow bait, fishing with crankbaits to catch suspended bass around timber is an excellent technique. Although some of our recent articles have been based largely around the fall shad migration, not all shad move to the shallows throughout the autumn months.

Pro Russ Lane makes a large portion of his living by finding deeper schools of bass relating to vertical wood cover. According to him, right now is a perfect time to catch giant bass with this technique.

Not all bait migrates

Just like all bass don’t spawn at the same time, not all bait migrates at onceâ€”some don’t even migrate at all. Depending upon a fishery’s water clarity, millions of shad will actually stay suspended in river and creek channels throughout this time of year.

“If every shad migrated into shallow water, you wouldn’t even be able to drive your boat because they’d be so thick,” Lane said. “Water clarity plays a big role in a baitfish’s fall behavior. In clear water lakes, not as many shad will migrate.
When they do, they concentrate in whatever stained water they can find, but their options become very limited. As a result, a lot of shad and herring will ball up in the main lake and in the guts of creek channels and suspend around vertical cover.”

While you can certainly have success targeting vertical pilings and dock cables, Lane believes the majority of the bigger bass relate to standing timber. The emergence of a recent fishing trend opened millions of anglers’ eyes to this
phenomenon.

“When the whole Alabama rig deal happened a few years ago, folks started realizing that a lot of really big bass will suspend around timber starting in the early fall,” Lane said. “It’s important to understand, however, that a big crankbait can catch these fish just as effectively.”

As conditions change, so will the position

More often than not, fall bass don’t sit directly on standing timber. In order to capitalize on the abundance of nearby bait balls, they’ll suspend on the timber as soon as the water hits the 69-degree mark, sliding up and down the water column depending upon the conditions. 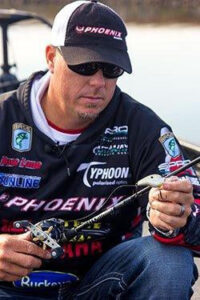 “Bass are constantly moving around standing timber,” Lane said. “If there’s a little currentâ€”even just a little wind-generated currentâ€”they’ll often drop down into the deeper depths of timber. If it’s bright and calm, you’ll notice a lot of bass suspending higher in the water columnâ€”especially if there are limbs on the timber.”

Vertical timber remains a viable bass fishing option throughout the early winter as well. When water temperatures begin to drop, a bass’ metabolism slows dramatically, resulting in lethargic behavior. Instead of traveling hundreds of yards to feed in cold water, Lane believes bass will utilize vertical timber in order to make small depth adjustments to match the depth range of surrounding bait balls

Be patient when looking for the sweet spot

The good news about this technique is that it can be very easy to pattern once you locate your first solid school of bass. The bad news, however, is it can take days to find a suitable school on submerged timber.

“I think a lot of anglers avoid this technique because you can be on the water all day and only find one place that really produces,” Lane said. “By noon, they’ve had enough and go straight to the bank to get some bites. It may take a while to

A wide wobble is important: Just as Lane would use a wide wobbling Bagley BB3 to catch kicker fish in shallow water, he also uses deep crankbaits with aggressive actions in deeper water. It will catch plenty of fish, but it really attracts the biggest fish in the school.

“It can be hard to find a productive area, but when you find ’em, you’ll be glad you stuck it out.”

When searching for suspended bass around timber, Lane starts by locating sharp break lines and humps. Depending upon the fishery, productive timber can be found in relatively shallow or deep water.

“I caught that 9-pounder on video off the side of a main river ledge on Lake Eufaula, but that’s just where most of the timber is located on the Chattahoochee River,” Lane said. “You can go to Clarks Hill and catch huge bass in the tops of timber located on humps. There’s not a set equation for finding itâ€”regardless of the fishery, you have to spend a lot of time idling and doing your homework.”

Fishing deep timber with a crankbait requires practice in order to reduce your hang-ups and increase your efficiency. Lane looks for two specific characteristics when choosing an effective crankbait for this technique.

“The SPRO Fat Papa 70 is definitely my number one choice for cranking deep timber,” Lane said. “It has two important traitsâ€”an aggressive action and buoyancy. I believe a really wide-wobbling crankbait usually catches the biggest bass in a

Stir things up: To activate both the bait and bass, Lane idles circles around deep timber to spook the bait balls. He’ll also do this with his trolling motor by kicking it into high-gear and throwing water. It sounds crazy, but it’s a technique he’s used for years.

“I can fire them up going through the school, and a buoyant crankbait significantly reduces your number of hang-ups.”

In order to keep your bait in the strike zone and avoid frustrating snags, Lane believes it’s important to envision what the crankbait is doing at all times. It won’t take long to develop a feel for your crankbait.

“When you feel your line rubbing on something or tighten up, it usually means your crankbait is coming over a horizontal limb,” Lane said. “When this happens, raise your rod and pause your retrieve to let the lure float over the obstructionâ€”coincidentally, this is when you’ll get a lot of bites. If you don’t get a bite on the pause, you’re likely to trigger one when you begin reeling again.” 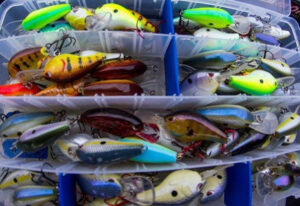 Because the large majority of bass will suspend in the same depth range around timber, it’s important to experiment with the depth of your crankbait. To do this, Lane keeps several SPRO Fat Papa 70s rigged with different line diameters

The type of line Lane uses depends heavily upon the type of timber he’s targeting. If it has a lot of limbs, he uses Sunline Super Natural Monofilament Line because its floating properties drastically reduce hang-ups. When conditions call for a deeper presentation, he opts for Sunline Super FC Sniper Fluorocarbon Line.

“It’s so important to understand what different lines do to crankbaits,” Lane said. “Fluorocarbon will give your crankbait a much wider, more aggressive action while a heavier monofilament will compress its action and give it a tighter wobble.”

Feed it to ’em

Lane has decades of experience fishing deep crankbaits and is a firm believer that you can literally feed your crankbait to big bass. This means that you’re not just chunking and reelingâ€”you’re consciously visualizing how they want the bait and exactly what your bait is doing

“If you pay attention, every single cast will tell you something, which is why constant adjustments are absolutely necessary,” Lane said. “If you cast 10 times to one piece of timber and finally hook a fish that throws the crankbait, that tells you the fish was facing you and you had the wrong angle. If you listen to what that bass told you, you can adjust your angle and really increase your chances of catching a big one.”

Although there are no rules to cranking for suspended fish around timber, Lane suggests utilizing three types of retrieves in order to catch more bass. If a bass inhales your crankbait while using one of these methods, it’s  important to duplicate it.

Burn itâ€””When I burn a crankbait around timber, I’m trying to dig into the other side of the earth,” Lane said. “This retrieve is all about a reaction strike and forcing the bass to make a split-second decision to eat your lure. You want

“It’s important to create as much disturbance as you can and slam into everything possible.”

Slow and steadyâ€””When the action dies down in a school, you can pick off some giants by simply crawling that Fat Papa 70 through the limbs,” Lane said. “Reel just fast enough to feel it wobble back and forth and make sure it hits the limbs. A lot of your bites will come right when the crankbait pops over a limb into open water.”

Stop and goâ€””If you turn your handle about five times, stop it for a second and start your retrieve again, you can produce some great reaction bites,” Lane said. “If you watch the video we filmed on Eufaula, I caught a ton of bass with this retrieve when I couldn’t get bit on others.”

Your bites will come in spurts

Don’t be discouraged when you find productive standing timber and start catching small bass. According to Lane, it’s common to weed through smaller fish before unleashing the full potential of an area.

“A lot of times, you’ll catch a bunch of little fish and then catch a 5-pounder,” Lane said. “When you catch that big one, you’ll probably catch another big one on your next few casts. When you have a big mega school around timber, there will

“Don’t just pull up to a school, make five casts and move on,” Lane said. “Give ’em an honest chance. They’re there for a reason and probably won’t leave anytime soon. If you’re patient and willing to sift through some smaller ones, you’ll get some big bites.”

“There might be hundreds of 12-inchers, but there will be a few 4 and 5-pounders lurking in wolf packs. It may take a while to get the wolf packs fired up, but when one bites, the other ones follow suit.”

After grinding on a single school, it’s not uncommon for Lane to let it rest for at least 30 minutes before coming back. Even if you can’t see it, surrounding bass will often follow a hooked bass to the boat. Once this happens a few times, the bite will slow down.

“Schooling fish bite well because of the increased competition down there,” Lane said. “When you catch them, you’re dragging fish away from the school and scattering them. When they’re scattered, there won’t be as much competition and the fishing will really slow down. If you leave for a while and let them get grouped up again, you can reignite the same school.”

If you’re looking for a great way to catch big, unpressured bass, try cranking deep timber for suspended fish. Not only will this technique catch a lot of bass, but it can produce some great kicker fish as well.