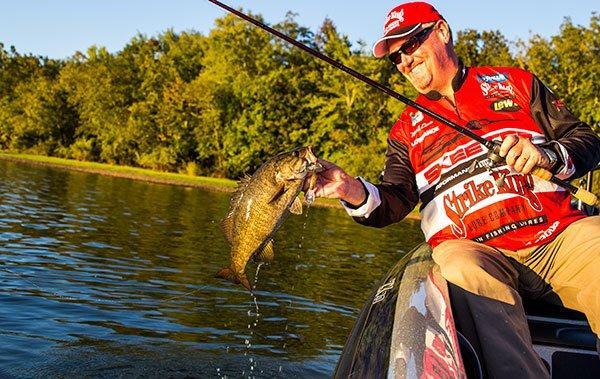 When the water and air temperatures begin to cool after a long, hot summer, you need to be fishing flats for bass. Throughout the fall, these flats play temporary host to millions of migrating shad as they make their annual trek to the backs of creeks. Wherever you find shad in the fall, you won’t have a hard time finding bass.

Elite Series pro and former Bassmaster Classic champion Mark Davis is a true student of fishing and has spent decades studying the biological habits and behavior of bass. According to him, fishing flats for fall bass isn’t as hit-or-miss as some believe it to be—there are several factors that can directly correlate to your fishing success.

While select flats may hold bass throughout the entire year, Davis expects more widespread, consistent flats fishing success immediately following the first cool snap of the fall. It doesn’t take much to kick-start a feeding frenzy.

“When the fall months arrive, the water starts to cool because the daylight hours get shorter and the nighttime hours become longer,” Davis said. “The first little cold snap—when the air temperature dips into the 60 and 50-degree range—really kicks everything into gear. As soon as the temperatures begin to drop, a switch flips in those shad and tells them it’s time to go shallow.”

Fortunately for anglers, fishing flats for bass isn’t necessarily a short-lived phenomenon. In most fisheries around the country, the pattern produces for Davis throughout the early winter as well.

“A lot of folks think flats fishing is a quick deal, but it can certainly continue until the earlier winter months,” Davis said. “They may be deeper on the flats, but they’ll still be there. When they get deeper, they can get harder to find because you can’t see the bait or any surface disturbance. But trust me, they’re definitely still around.”

If you make an effort to learn and understand the behavior of bass forage, both the quantity and quality of your catch will likely increase. Because fall fishing is so heavily dependent upon the progress of the shad migration, it’s important to become a student of the shad.

“Bass are just like any other wild animal—they will always follow the food source,” Davis said. “There are several theories as to why shad migrate, but I believe they go shallow to feed. They have a much higher probability of surviving in deeper water, so that tells me they’re obviously up there to feed on plankton and other small organisms. They certainly don’t migrate to be eaten by a big bass.”

Davis also points to a common misconception surrounding fall bass fishing. Contrary to popular belief, the bass don’t always follow shad to the shallows. There are several instances in which the shad are swimming into a virtual death trap.

“On a lot of river system lakes, the hot summer temperatures force a lot of the bass to prematurely move shallow,” Davis said. “They don’t have a choice if you consider the circumstances. The dissolved oxygen levels become so poor that the bass are forced to seek more favorable water conditions. So when the water cools and the shad finally start sliding onto the shallow flats, the bass are already there, just waiting. They know what’s coming.”

Fall bass fishing gives anglers of all skill levels the opportunity to catch huge numbers of bass in a single day. If you’re looking for bigger bass, however, things can get a bit tricky. According to Davis, it’s essential to find shad that are further along in their respective life cycles.

“Throughout the fall, the shad aren’t going to be the same size,” Davis said. “Like bass, shad don’t all spawn at the same time. Some spawn in April, some spawn in May and some wait until June. Shad that spawned and hatched out early are going to be bigger in the fall because they have a few more months of growth under their belts.”

If you can find a prominent population of 4-inch shad, you can expect to see an increase in the size of your catch. Although it’s not a totally failsafe theory, it’s one that has helped Davis throughout his career.

“When you find bigger shad in the 4-inch range, you’ll generally notice larger bass feeding on them. Smaller shad usually mean smaller bass, but that doesn’t mean you should totally ignore them—there may be a few bigger, less active bass hanging around so it’s a good idea to go ahead and make a few casts.”

In addition to being bigger, Davis also believes bass feeding on larger shad are much more gullible in regards to artificial lures. After all, it’s easier for anglers to upsize than it is to match miniscule forage.

“You’ll have a much easier time catching bass that are actively feeding on big shad,” Davis said. “There are dozens of lures that imitate a 3 or 4-inch shad. When you’re up against acres of small shad, it can be extremely difficult to accurately imitate them.”

What to look for in a productive flat 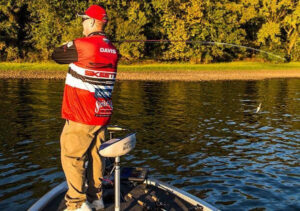 “I’ve seen so many times when you have great looking cover and the bass are paying absolutely no attention to it,” Davis said. “When it’s the heart of the shad migration, bass will actually use the bait balls as cover, almost like a big security blanket. It gives them the best of both worlds—a constant food source and plenty of shade. You can throw at the good looking stumps all you want, but you’ll catch more bass concentrating underneath the bait balls.”

In lieu of cover, Davis suggests concentrating on finding four specific flats characteristics in order to enjoy the most consistent success.

Stained water—“First thing I look for is some sort of off-color water,” Davis said. “If you can go up on a flat and see the bottom in five or six feet of water, you won’t catch as much. Ideally, you want to find 18 inches of visibility or less. It makes bass much less spooky and easier to fool.”

Ditches—“Ditches are a huge deal when you’re looking for productive fall flats,” Davis said. “It can be just a small drain, but I really like to have some sort of defined depression. A ditch intersecting with a flat gives bass an easier, more natural path of entry and also gives them quick access to the security of deep water.”

Wide—“You’ll have better success concentrating on broad, wide flats instead of narrow ones,” Davis said. “When wind blows into these flat pockets, it turns the water up, moves plankton, creates a little stain and gets both the shad and bass more active. Wind doesn’t affect narrow flats nearly as much—you may find a few tiny schools, but the huge schools will be in wide basin pockets.”

Hard bottom—“You can have a lot of success on flats in the fall by targeting composition changes such as gravel to sand, gravel to mud or even pea gravel to chunk rock,” Davis said. “Just like bass like a hard spot out on a river ledge, they love it on flats too. A hard bottom isn’t necessary with this technique but it can certainly help a flat be more productive.”

We’ve all heard anglers talk about the importance of finding a “sweet spot” in a specific area, but it doesn’t really come into play when you’re fishing flats during the shad migration. According to Davis, the bass activity is similar to a revolving door.

“Casting angles are huge throughout most of the year, but they’re not too big of a deal now,” Davis said. “Remember, you’re targeting shad fish—they’re not going to set up on cover like they normally would. These bass are constantly roaming and moving with the shad, so you may find a sweet spot for five casts, but then the school will move and you have to change things up.”

In order to get the most out of these shallow bass, Davis casts similar to a merry-go-round. After a few casts to his right, he’ll make a few casts to his left and so on. He believes this approach gives him a better chance of locating the active school.

Many believe the most productive fall fishing hours to be early in the morning, but Davis has a different theory on things. When fishing flats for schooling bass, he does the large majority of his catching from mid-day to early evening hours.

“This pattern is always a mid-day deal,” Davis said. “Very seldom is it productive early in the mornings. I don’t know exactly why it is, but the sun seems to activate both the baitfish and the bass. It could have something to do with warmth, but nobody really knows. Similarly, the fishing will also be much better on sunny days as opposed to cloudy days.”

Lures to cover your bases 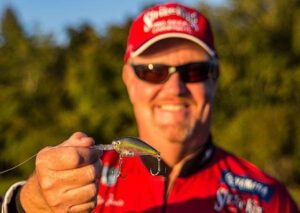 Lipless crankbait—“A Strike King Red Eye Shad is one of the most versatile baits you can use throughout the fall,” Davis said. “You can burn it, yoyo it through the water column or even crawl it across the bottom. It looks just like what they’re eating, so it’s a definite fish catching machine. Sometimes you can even throw it out and let it sit on the bottom for a few seconds and jerk it a few times. It’s crazy, but it really works.”

Walking topwater—“If I see a lot of surface activity, I’ll throw a Strike King KVD Sexy Dawg to get some great blowups,” Davis said. “I like the bigger model because I can cast it further and it tends to catch bigger fish. If you’re around smaller shad, however, don’t be afraid to use the smaller one.”

Flat-sided crankbait—“When the bass and shad move out to the deeper ends of the flats toward the end of fall, a Strike King KVD HC Flat Side Crankbait is an outstanding selection,” Davis said. “It has a very lifelike, tight action and is very castable. With big line and a casting rod, you can keep it in the 3-foot range or you can move down to 8-pound line and a spinning outfit and bump the bottom in the 8 to 10-foot range. It’s extremely versatile.”

Not all flats are created equally. If you make an effort to understand shad behavior, recognize desirable characteristics within a flat and learn what lures to throw, there’s a great possibility you will catch a lot more bass this fall.