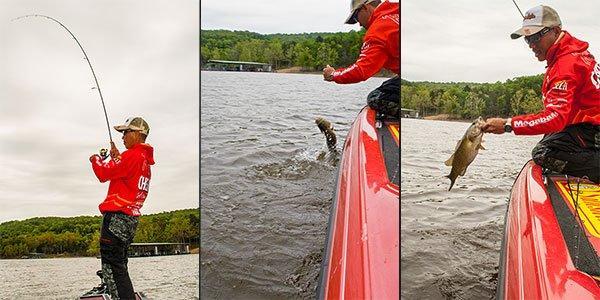 The water clears, and you see your spinnerbaits and crankbaits from a pretty good distance under the water. You’re not seeing much in the way of bass, and you’re not getting any bites. The water has been cooling and the fish seem to be educated and keyed in on schools of bait. But nothing you’re throwing seems to be working.

It’s a familiar scenario this time of the year. The water seems to lose a lot of its color in the fall, and the bass seem a lot more educated. There are still a lot of bass chasing shad, but the chances the bass will find your bait in a sea of shad can be a discouraging thought to most anglers. But don’t fret; there are other options out there that can lead you away from the shad game. We’ll talk more about combating an over abundance of shad as well as other options for bass fishing other than shad in the fall in upcoming articles, but today we want to focus on one technique in particular that has gained popularity in bass fishing circles, especially on fisheries with good visibility â€“ The wacky jighead or often called flick shake approach.

We’ve talked about the Flick Shake before, so we’ll spare you the intricate details there again. But it’s interesting to note that you don’t have to be a detailed expert on the technique to have a lot of success with something as simple as a wacky jighead and a Senko or finesse worm. One guy you would think that would be very detailed in his finesse approach but often makes his wacky jig work in places others would never think to throw it is FLW Tour pro Shinichi Fukae.

Fukae makes finesse work everywhere he fishes. He’s been experimenting for a number of years with the wacky jig and soft plastic technique. He’s experimented with everything from shapes of worms to size of heads to finally designing the exact head he wanted with Gamakatsu. Fukae developed the G-Finesse Wacky Jig from Gamakatsu because he needed a head that was perfectly balanced, with the right bend and throat to hook and hold fish as well as a weed guard, something that was missing from a lot of wacky jigheads.

Fukae spent one morning showing me how he employs the Wacky jig in various situations. “The falling is the most important part,” Fukae said. “But the hop-hop-hop is important too.”

As Fukae said this, he motioned with his hand with it flat then as he hopped up off the bottom he cupped his hand and hopped it up in the air.

“This is how everything moves in the water. A crawfish moves in those short pulses and then just floats to the bottom. You see shad dart around and then suspend motionless. That’s what makes the wacky jig so effective. It moves very naturally in the water. Then when it gets to the bottom, I jump it up in short pulses and then let it free fall naturally again.” 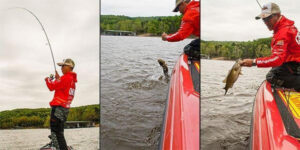 For Fukae, the Wacky Jig catches fish all year in depths ranging from 1 foot to 25 feet. It’s amazing around bedding bass and even better for post-spawn fish that are often finicky to say the least. When he fishes the rig around grass like in Florida or on a lake like Guntersville or Champlain, he’ll upsize to a baitcaster with heavy braid and 16-pound fluorocarbon line.

His staple setup, however, includes a Megabass Orochi spinning rod that he designed matched with a Shimano Vanquish reel (that is currently only available in Japan). He matches that with YOZ-AMI (YGK) braid that sinks in 16-pound test and matches that with an 8-pound fluorocarbon leader from the same Japanese manufacturer.

The beauty of this rig is it works where a lot of other baits are too over powering, namely around vertical cover in ultra clear water.

Since fishing with Fukae, I’ve played around a lot with the Gamakatsu head and have found it to be a dynamite bait around docks in clearer water. I think it could also be a neat presentation in the tops of brush piles and standing timber in clear water reservoirs. Not to mention the bait has proven to work equally well on largemouth, spots and smallmouth bass alike.

Fukae experiments with several different shapes when on the tournament trail but often finds that a 4-inch Senko or Shad Shaped worm works really well on the rig. But the Senko works around docks, standing timber, rocky banks, stumps, grass weedlines, rip rap and more. So why make it more complicated than it needs to be. I’ve since used the rig with a Zoom Mag Finesse worm with a lot of success as well as the old standby Zoom Trick Worm.

We shot a video with Fukae on his Wacky Jig technique on Table Rock earlier this year, and he caught several nice bass to 4 pounds and a lot smaller fish as well. He casts the rig a great distance right up near the bank and can cover from inches of water to the bottom effectively.

The key really is to let the bait work as it falls, then think of a bream or a crawfish moving naturally in those short bursts away when fleeing then stopping and suspending or floating effortlessly back to the bottom. That natural presentation can often be all it takes to turn a skittish fish into a hooked fish.

“When the bass are on the bottom, a shaky head or a drop shot can work better,” Fukae said. “But when the fish get up off the bottom, this works better to catch those fish in between. They see it slowly go by. Then it hops back up to them; then slowly goes away. I am teasing them; then it’s falling.”

I was surprised how well the wacky jig hooks bass. Because of the centering of the weight and the hook on the plastic, nearly every bass Fukae catches and subsequently I’ve caught has been hooked right up through the nose.

One final note Fukae offered was to watch your line. He uses a yellow colored braid, using it almost as a strike indicator much like fly fishing anglers do. He will pulse the worm up, then as it falls watch his line. If it jumps, starts sinking faster or just stops early, he just leans into the fish and starts reeling. It’s that simple to get a good hook and work the bass to the boat.