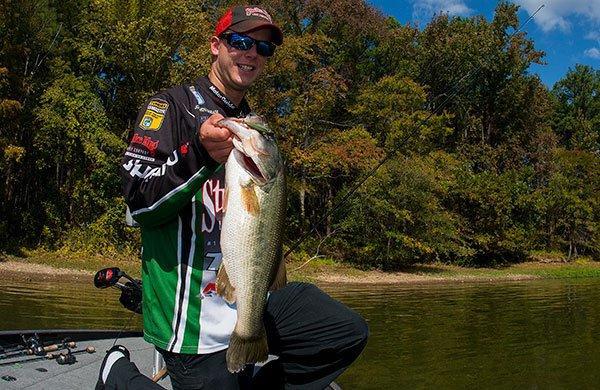 You come off plane, pull down the trolling motor and look down at your graph. Fish are everywhere. Should be a quick limit, right? You fire your favorite crankbait over the point and begin your retrieve. Slack gets knocked into your line as you feverishly reel to catch up with the fish, but no such luck. A single cheek scale hangs from your treble hook.

You quickly regroup, slap the scale off in the water and make another cast. The same thing happens again. You’re not the only one who gets frustrated by short strikes and timid bass – it happens to anglers all the time, professional anglers included.

Strike King pro Jonathon VanDam is a master at overcoming tough conditions by coaxing big bass with small baits. He recently shared some of his favorite small bait selections and the techniques he uses to implement them effectively in his fishing.

We’ve all heard pros say it for years, but it never hurts to reiterate it one more time: You have to match the hatch.  This little cliché is a huge key for anglers of all skill levels, yet many remain set in their ways. If your bait doesn’t look natural or resemble the bass’s primary food source, you’re not going to catch as many fish.

Identifying the type and size of a lake’s forage sometimes requires maximum effort, but can pay huge dividends. Doing so efficiently requires careful and constant observation of all of your surroundings.

“You have to keep your head on a swivel while you’re fishing,” VanDam said. “Schools of shad can often surface right next to your boat, and you would never know it if you’re not paying attention. It’s also important to pay close attention to the fish you catch. Inspect them and look for clues. Look in their throats and in your boat to see what they’re spitting up. That’s a pretty failsafe way to figure out what they’re eating. Once you figure it out, you have a great starting point.”

VanDam prefers to start out with smaller baits when fishing northern lakes due to the smaller shad that inhabit the fisheries. When fishing southern lakes, he will generally use larger baits first and downsize if the bite is slow.

Crankbaits are widely known to be some of the most effective ways to catch quality bass. With endless colors and styles to choose from, anglers can imitate every type of forage imaginable. Small crankbaits allow the angler to cover water while targeting bass at shallow depths.

“When I find shallow bass on points and weed beds, the Strike King 3XD really puts them in the boat,” VanDam said. “In these situations, I’ve found that fish will really key in on smaller shad, and the small profile of the 3XD will send them into a feeding frenzy when larger crankbaits won’t. You will also get fewer short strikes, resulting in more fish in your livewell.

When fishing shallow around heavy cover, a small crankbait with high buoyancy is tough to beat.

“If I’m fishing around shallow, heavy cover such as blow-downs and rocks, I love to throw a Strike King Pro Model Series 1 crankbait,” VanDam said. “It quickly floats to the top when I stop my retrieve, which allows me to bring the bait through some really heavy stuff. It helps me spend a lot more time fishing instead of getting hung up.”

During these hot summer months while many anglers are fishing offshore, you can oftentimes find a shallow bite with small crankbaits. In low-light conditions, a small crawfish-colored crankbait with rattles can produce a big pay day. As crawfish come out of the rocks to feed, they make clicking sounds on the rocks that bass can sense with their lateral line. These small rattling crankbaits deflect well off of the rocks while perfectly emulating a feeding crawfish, which can result in some of the year’s biggest bass.

In shallow, grass-heavy lakes, lipless baits have dominated for years. Many tournament anglers have been in situations in which the entire field is bombing 1/2-ounce lipless baits around the entire lake. While this approach can prove effective, smaller lipless baits will often catch the bigger, more wary fish.

“When I fish lakes like Guntersville, a lot of times I’ll throw a smaller lipless bait than my opponents,” VanDam said. “Bigger baits can definitely get interest from big bass, but all too often they’ll barely get stuck by the back hook and come unbuttoned in the thick grass. To combat this, I’ll throw a 1/4-ounce Strike King Red Eye Shad so the fish will eat it better without spitting it.”

Good EWG style hooks are paramount when throwing lipless baits. Because the hook points are turned in towards the bait, you are much more likely to catch bass instead of vegetation.

“The only hooks I’ll put on lipless baits are Lazer Trokar TK310 EWG treble hooks,” VanDam said. “They are the sharpest hooks on the market, and they keep grass away while sticking, and most importantly, holding bass.”

Every angler loves the look, sound and rush of a big topwater bait chugging across the surface. There are many times throughout the year, however, when a big topwater bait just doesn’t cut it. Small topwater plugs can often produce the same adrenaline pumping blowups that we all know and love.

When the bass are heavily feeding on bream and mayflies throughout the summer, they are huge suckers for these small topwater baits.

“A Strike King Spit-N-King is my favorite topwater bait to throw in the summer,” VanDam said. “Since bream will often feed near the surface, it’s a perfect imitation. I’ll deploy my Power Poles and throw it around in the backs of pockets in the late spring or early summer and catch lots of really big bass.”

Because the Spit-N-King is a lightweight bait equipped with small hooks, rod selection is always important to consider. VanDam prefers a 6-foot, 10-inch medium-heavy Shimano Cumulous for this application. The light tip and fast action builds up nicely on the back cast, transferring energy into the bait for long casts.

While some topwater baits are more effective in breezy conditions, the Spit-N-King really shines in calmer conditions.

“I always prefer the calmest water conditions possible,” VanDam said. “When the water is slick, the Spit-N-King stands out to the fish and makes it easier for them to track down. If the water is rough, it seems like the bass have a hard time honing in on the bait, which increases the number of missed blowups.”

Tired of the short strikes on your favorite soft plastics? Don’t be afraid to downsize – small fish are not the only ones who will steal the tail from your big worms and jig trailers. The drop shot and shaky head are the most effective ways to naturally present small plastics to big, cautious bass.

“I love fishing for smallies, so I never hesitate throwing a drop shot and shaky head for big fish,” said VanDam, who feels right at home with a spinning reel and light line. “A lot of guys associate these two methods with small fish, but that is definitely not the case. Some of the bigger fish I’ve caught have come on the drop shot or shaky head.”

When drop shotting, VanDam swears by the Strike King KVD Dream Shot – the same bait that led him to his first Elite Series win last month on Lake Michigan.

“The Dream Shot is the best drop shot worm on the planet,” said VanDam, who helped develop the bait. “When it comes to throwing the drop shot, I am a big bottom contact guy. I want to feel everything. This bait allows me to use a heavy 3/8-ounce weight because it doesn’t need much rod action at all. It works almost entirely on its own.”

When conditions call for the trusty shaky head, the Strike King KVD Perfect Plastic 5-inch finesse worm is the favorite of many professionals. Due to its unique tail design, it is best to use the lightest weight you can get away with.

“I have a lot of really big bass hit these worms on the fall,” VanDam said. “They cannot resist all the bubbles that its tail creates. For that reason, I generally use a 1/8-ounce jighead. I want my bait to fall as slow as possible to maximize my chances of getting a big bite.”

Big fish don’t always bite big baits, and you can’t always make them eat what you’re throwing. They often key on forage of a certain size and during the summer the new forage of the year can be pretty small.  It is essential to become adaptive and aware of your surroundings in order to get the most out your time on the water. Small baits – whether  they’re crankbaits, lipless baits, topwaters or plastics – can catch some of the biggest bass in the lake.  Try downsizing with the forage and see if you don’t upsize your catch. 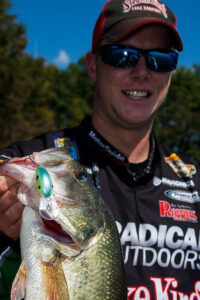