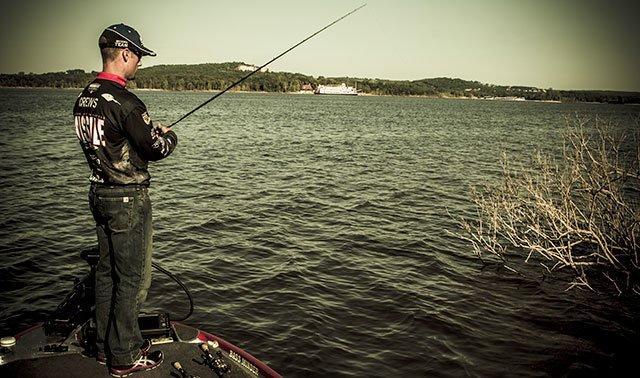 Itâ€™s almost here. The crisp breeze, clean air, cool mornings and the light morning frost on your boat carpet â€“ fall is on its way. While this fall may be the most widely anticipated season in recent memory due to this summerâ€™s oppressive heat, we â€œfish headsâ€ have just one thing on our minds â€“ the crankbait bite. The excellent crankbait fishing that fall offers is no secret to most anglers. As the shad make their annual migration toward the backs of creeks, hungry bass are sure to follow.

There is, however, an equally effective, often-overlooked fall pattern for putting bass in the boat. This can be an outstanding time of year for flipping shallow water cover for big bass. While cranking in the fall definitely leads to large quantities of bass, many anglers have a hard time locating and putting that â€œkickerâ€ fish in the boat. If you break out your big flipping rods, you may be surprised at the number of quality bass you catch.

Missile Baits pro John Crews flips his way to big checks in professional fishing, and though he’s also known as a crankbait chunker and winder, heâ€™s often camped out in the shallows with his flipping stick in hand. He recently shared some of his favorite fall flipping conditions, locations and baits.

As with any fishing technique, successful fall flipping depends heavily on several specific conditions. Anglers should consider bait location the most important variable within a fishery in the fall, which can change daily.

â€œThe location of bait differs with every lake,â€ Crews said. â€œIn some lakes, the shad tend to concentrate in the main creek channels during the fall, while in other lakes the bait will stack up in the backs of creek flats. Itâ€™s important to be adaptive because the bait is always moving. Let the shad tell you where they are and donâ€™t get locked into any hard-set rules. Itâ€™s all about the bait, even when youâ€™re flipping.â€

Weather conditions also play a large role in Crewsâ€™ decision-making process. Bluebird skies and calm winds make for perfect flipping conditions as the fish will position tightly to cover, allowing for pinpoint casts to likely big bass dwellings. Just as we would put sunglasses on to protect our eyes from the sun, bass use underwater cover to improve their perception in sunlight. While cloudy or rainy conditions generally arenâ€™t ideal for flipping, Crews will still flip soft plastics while alternating between various moving baits.

Fall is a time when shallow water fishermen feel right at home. With both the bait and the bass continuously migrating towards shallow water, Crews doesnâ€™t waste much time flipping deep structure.

With many of the countryâ€™s lakes having fall drawdowns, it is important to focus on any shallow, hard cover that remains in the water.   With more cover high and dry in the fall, the few pieces that are still submerged will generally hold larger concentrations of fish. When an angler makes just a few casts towards the cover with a lure, the bass only have a split-second to react to the bait. To combat this problem, Crews prefers to slow down and thoroughly flip the piece of structure in order to give more bass a good look at his offering.

â€œWhen the bass get concentrated on shallow cover in the fall, itâ€™s always best to keep your bait in the strike zone for as long as possible. Sure, you can pick one or two bass from it with a moving bait, but if you really pick it apart you may catch a lot of fish that you may have otherwise missed.â€

If Crews develops a pattern on hard, shallow cover, he will often try to hit as many similar areas as possible.

â€œThe key to successful fall flipping is largely about covering water,â€ Crews said. â€œBass are constantly on the move this time of year, and itâ€™s important to think on your feet and move with the fish.â€

Numerous bass fishermen fall into the trap of thinking that big baits catch big bass. While this can certainly prove true throughout different times of the year, it is not the case when flipping in the fall. A smaller, more subtle bait will frequently outperform larger, bulkier baits. Not to say he doesn’t on occasion break out a bigger profile bait but he’s found smaller profiles unique for a simple reason.

â€œOver the years Iâ€™ve found that a subtle, darting action is much more effective for fall flipping,â€ Crews said. â€œFish are a lot more pressured later in the year, with many having been caught before. They get accustomed to seeing big baits and are less likely to be fooled by them.â€

For the majority of situations, Crews turns to his signature Missile Baits Missile Craw, as its small profile will elicit reaction bites. As the bait falls through the water column, the darting action initially draws the bassâ€™ attention, and when slowly hopped along the bottom, the bass will move in for the kill.

â€œThe Missile Craw doesnâ€™t have a lot of appendages which gives it a very natural, non-threatening presentation,â€ Crews said. â€œWhen you hop in on the bottom it looks just like a small crawfish trying to hide, which represents a quick, easy meal for bass. Youâ€™ll get a few bites on the fall, but most bites occur when itâ€™s on the bottom.â€ 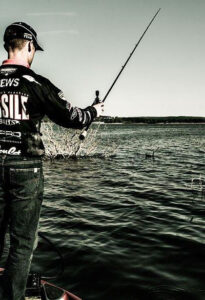 â€œThe weight allows the bait to fall quickly and draw an initial reaction from the bass, while allowing me to maintain bottom contact,â€ Crews said. â€œA 1/4-ounce weight is not quite heavy enough to make it dart like I want, and a 3/8-ounce is generally too heavy. If Iâ€™m flipping thick grass or dense cover I may switch it up and flip a Missile Baits D Bomb with a 3/8-ounce or 1/2-ounce weight so I can really get into the thicker cover.â€

Because fall bass can be quite wary, Crews urges the importance of good hookup ratios. Unhappy with poor hookup ratios with other soft plastic baits, Crews developed a hook slot in the bottom of the Missile Craw to allow for more solid hooksets. Likewise he developed soft ridges on the D-Bomb to give a good hook up every time.

â€œThe Missile Crawâ€™s hook slot allows the hook to really jump out on the hookset, which really reduces my number of missed fish,â€ Crews said. â€œItâ€™s all about confidence. When I get a bite, I know that fish is getting in the boat. I caught the majority of my fish on it throughout the PAA event on Neely Henry. Itâ€™s   an incredible bait for pressured fish in cover.â€

Thereâ€™s no question about itâ€”fall fishing is a blast. As the boat traffic dies down, the brutal heat begins to fade and the fish become more active, anglers are vastly rewarded for their patience during the hot summertime months. In addition to the classic reaction bait fishing that fall is widely known for, flipping in the right conditions and targeting the proper depths with the right baits can lead to some big autumn bass.