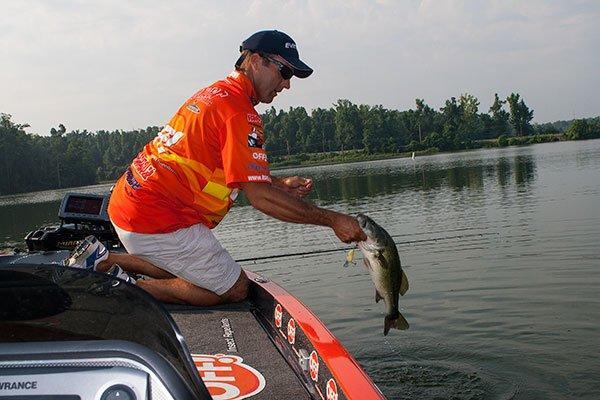 The days are shorter, the water is cooler, the baitfish are more abundant and the fishing got worse? Fall can be a feast or famine if you don’t follow the migration of fish with the forage and the changing conditions. A lot of that has to do with the types of areas they like to frequent this time of year, namely large expansive flats. So they are not just everywhere but they can be predictable and with a good search bait like a crankbait, an angler can find them and catch a good pile of bass by covering water effectively.

We talked to Terry Bolton recently about fall cranking around flats and he was very forthcoming with how he approaches this time of year on a variety of fisheries. He covered everything from tackle selection, location, conditions, cover and other variables as well. This should give anglers that like to crank as much as we do a bunch of good ideas for fishing the next month or two.

“I usually pull crankbaits out again in late summer early fall,” Bolton said. “There is a time during the summer where I put them away because there isn’t much flow, much oxygen, much bait and the weather is usually sunny and slick. Just not real conducive to fishing a crankbait. But as the days start to get shorter, the water temperatures start to change and the shad start showing up in great numbers in the mouths of the bays and main lake flats, I start bringing four and five rods with crankbaits.”

In the Midwest and other parts of the country there is a lot happening now and this can be a frustrating time to fish because the bass start moving more. The days getting shorter, the photo period changing, is what Bolton believes makes the fish move first, even before the water temperatures drop. They may move from deep spots to main lake flats, but they are moving nonetheless. The shad is grouping up and starting to meander into the mouths of the bays and backs of pockets, especially late in the evenings. The water quality is changing as a lot of depths of water may not have viable oxygen levels for the bass. And there can be other factors like fall draw down occurring.

“I always start with the flats in the fall,” Bolton said. “Flats are VERY important this time of year. But anglers should realize flats don’t mean the backs of the bays or pockets necessarily. I catch a lot of fall bass on main lake flats, flats in the mouths of bays, even flat points. It depends a lot on the fishery. If you’re on a Tennessee River impoundment, there can be good flats in the middle of the lake. But on a highland reservoir, there may only be flats in the backs of creek arms.”

Bolton notes that cover can be important on the flats, but it doesn’t have to be the driving force to where you fish on the flat. Grass can hold a lot of fish on a flat, as can stumps, manmade brush piles, stake beds, laydowns and more. But he’s also had some huge catches on flats that had nothing on them but a small depression that the fish were relating to on an otherwise void flat.

He starts out on the edge of the flat first and then works up on top of the flat as he goes, focusing on making extremely long casts to cover as much of the flat as possible from every angle. To do this he will focus his efforts in water less than 12 feet. He employs a whole line of Rapala crankbaits to cover all his bases. He starts out deep with the DT 14, DT 10 and then works in with the DT 6 before getting “dirt shallow” as he calls it with the DT Fat 3 and the Rapala Clackin Crank 53 as well as a lipless Rapala Rippin’ Rap. But it’s not enough to just have the variety of baits as he starts to dial in on the areas holding fish, he really experiments with the actions of the baits and how they ride in the water on different line sizes.

“I might find that the fish are really hitting the DT 14 or DT 10 on the edges of the flats but they are not right on the bottom as well,” Bolton said. “That’s when I’m going to have three or four of the deeper crankbaits tied on with different line sizes from 10 to 15 pound monofilament.   I’ve had times when a DT on 15 pound line riding just over some of the cover on the edges of the flats caught me big fish in the fall. But other times a DT 14 plowing on 10-pound Sufix monofilament stirring up sediment causing a commotion triggered a lot more strikes.”


Bolton stresses that when he targets fall bass on flats, he’s just trying to find a fish or two that will bite and then he starts varying his retrieve, his line size, the action of his baits to see if he can trigger. He said he often finds a bass or two with just a steady moderate retrieve but then when they don’t bite after that he goes to burning the crankbait or digging real hard or ticking the top of the cover to really catch the fish in the area.

That allows him to fish the flats fast and cover water. He’s making long casts, from the outside working in. As he sees targets like stumps and laydowns, he might pick up a little shorter rod and make more targeted casts. If he doesn’t get any bites and doesn’t see any action like fish blowing up on shad, he’ll move on to the next flat. If he hasn’t gotten a bite but he’s seeing a lot of fish chasing and feeding, he’ll keep switching up baits and line sizes until he’s presenting something fish will react to more readily.

Sometimes switching from a rattling lipless bait to a silent square bill can do the trick. Sometimes getting his bait to ride up in the water column over the top of the fish can get them to bite better. Sometimes changing his retrieve speed helps.   He’s found often using an overlooked bait like that Clackin Crank 53 with the loud clacker and tighter wobble can trigger bass just because a little more unique action and sound.

He keeps his tackle simple. He starts out deep with Denali 7-foot, 6-inch cranking rods and as he moves shallower will go to a 7-foot Denali Jadewood Medium-Heavy rod that allows him long casts but gives him a little more control to be able to roll cast a square bill along a laydown, etc. He sticks with a Lew’s Tournament Pro series reel in 5.4:1 gear ratio most of the time. That lower gear ratio causes less torque and he can throw the DT 14 or DT 10 all day without fatigue. As he moves shallower he might move up to a 6.4:1 reel for his lipless Rippin Rap or square bill to give them more erratic retrieves. He might go as high as 20-pound line on those two baits when he’s up in the mud.

As far as the conditions, he likes a little wind or cloud cover and some stain to the water. It seems like the sunnier, flatter and clearer the water is, the harder the bass are to catch on a crankbait and he’ll go to something a little more subtle. He’s seen days where the bass were in inches of water in numbers on bright sunny flat days but they were hard to make bite with a crankbait.

He is a big proponent of the Sureset hooks on the DT series of crankbaits. He’s had countless fish barely hooked, sometimes on the outside of the mouth with that one big hook in the back. He feels he would have missed those fish that took a half hearted swipe at the bait without that big back hook. But he at times will downsize his hooks to VMC Short Shank Round Bend hooks when he’s fishing a lot of brush piles or around grass to pull the hook points in closer to the body of the bait and make the lure more snagless.

“Those DT crankbaits from Rapala are the best mass produced wooden crankbaits on the market,” Bolton said. “I usually stick with shad colors like Helsinki Shad and the new colors in the Ike Custom Ink Series have really been working for me this year. Colors like Blue Back Herring, Penguin and Ike’s Smash are really good colors. But I will also throw the Hot Mustard, Parrot and other brighter colors in more stained water or on real cloudy windy days. For my lipless Rippin Raps, I stick with Chrome Blue, Chrome Black and Pearl Grey.”

Bolton loves fishing in the fall. He loves throwing crankbaits and when he covers a bunch of water and finds that one sweet spot on a flat, there is nothing better to him. Cooler temperatures, shorter days, more baitfish present all means it’s time to load the deck with crankbait rods and get to work.