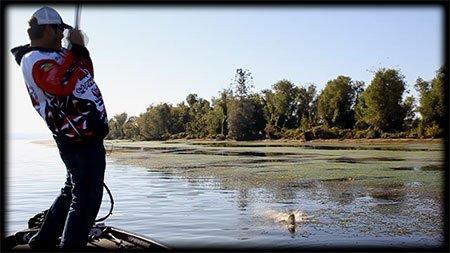 You know line choices when you are fishing around grass, you know, it depends, the verdict is still out on the lipless crankbait.  There are certain situations when I throw it on braid.  You know when the water is colder and you are fishing on real heavy grass, the deal is that with braid, you can just barely pull it and take the grass off of it.  Also when you are reeling it slow, you can tell if it has just one piece of grass, just one piece of grass and it will change the vibration.

One of the drawbacks is having a no stretch line tied to those trebles. During the colder months when the fish don’t jump as much and the bodies are alot harder, I know most people can tell the difference if you catch the fish out of cold water and how hard they feel.  When you catch them out of hot water, they are really soft and the hooks have a tendancy to tear alot easier when the water is warm so when the water is warmer, which is strictly a fluorocarbon deal for me, cranking or lipless crankbait or whatever I am doing in the grass. Then during the colder months, depending if the grass is heavy, I have a tendancy to go to braid on my lipless crankbait. Not so much on my crankbait, just on my lipless crankbait.

Spinnerbait, again, I like fluorocarbon or mono, either one, that’s just up to the individual. Now when I am flipping grass, it’s 100% braid. I mean there is no reason not to use it because even regardless of how clear the water is, that fish can’t distinguish between the braid and the grass and I paint it green. The other thing is that braid carries no light so there is no chance of it shining in the grass.  Normally that bite happens so quick like the last couple that I caught here, it happens on the initial or the first time that I pick up so the fish isn’t spending alot of time looking at the scenario.

Now if I am fishing holes in the grass during the spawn, the water is extremely clear, dragging a bait out here on the outside edge, deadsticking that Caffeine Shad in the grass, which is a killer technique for catching them early in the year, it’s a fluorocarbon deal. If there is a chance that I am going to have to leave that bait around that fish for a long time, you know to entice them into biting, than there might be a chance that the fish can see the line. Then I would go to fluorocarbon. The topwater bait again is kind of up to the individual, some people like braid, some people like mono, I experiment with both but again during the colder months, I like the braid because the fish is hard but during the warmer months, I like mono.

Fish jump alot, they jump alot after the spawn too, the post spawn. They are long and lean and they aren’t as heavy as they were and they seem to jump alot during that period of time and the water is warming up. I have a tendancy to stick with mono with my top water baits and crank with fluorocarbon. The big reason for cranking with fluorocarbon is the sensitivty, two reasons really, and you can tell what the bait is doing, the other deal is that fluorocarbon has less stretch in it than mono so when that bait hangs in the grass, I can get the bait out cleaner and alot quicker. I can tell the difference between the grass and a fish because alot of times, what will happen is you will crank that bait into that grass and the fish will get it and they don’t always crush it, alot of the time they are just easy and I can just feel the tendancy between when it’s pulling on the grass.  It will pull clean, you can feel it and when a fish has got it, I will pick up and I can feel it kinda of streech and I can tell the difference in the bite, you will feel a little bit of roughness on the line.

Nothing beats flipping grass, hahaha….it’s just fun!  You know all of these fish that I have caught so far this morning, I see the line.  That’s another reason I like braid, you can see it so well and I paint about the first 3 feet of it green and than as it fades up the line, you know it is brighter, I can see it on a cloudy day or whatever and it helps me so I paint the part where there is a chance that a fish would see and actually, in all honesty, there is a chance they would bite it if I didn’t paint it.  I do that for me more so than for them.  If I think it looks good, I’ll do a better job of fishing it. Hahaha….I keep thinking it’s going to be a good one!