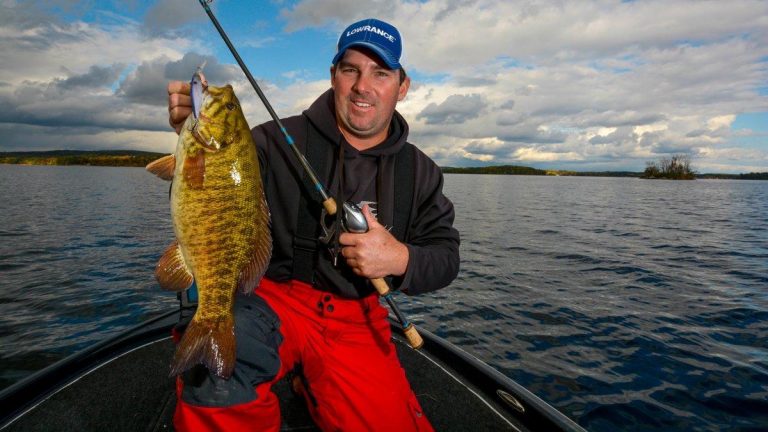 A deep-running jerkbait reliably catches smallmouth bass in the fall. These lures dive to the strike zone of bronzebacks hiding on humps in natural lake basins, along steep rock walls and near river channel ledges. The lure’s rattles, flash and erratic action attract smallmouth from a distance. This helps cover vast areas in clear water.

Jerkbaits also mimic smallmouth forage, including shad and smelt. Better still, when paused, the subtle movement of a suspending or slow-sinking jerkbait is potent at getting bites from smallmouth in cold water.

Here are four things to consider when targeting bass with deeper running jerkbaits:

As he predominantly fishes clear water, Barnett matches lure profile and color to abundant forage. Wide-bodied jerkbaits with dark backs and clear, white or silver sides mimic shad. A long, slender jerkbait in similar colors with a hint of purple added to the sides replicates rainbow smelt. A few hot, bright baits round out the mix.

“With a slow sink rate, I know when I twitch it, it’s nose is down, and it’s going to dive, and then sink further down on the next pause,” Barnett said. “On a long cast and a slow retrieve, I can get a weighted jerkbait to dive to 20 feet.” 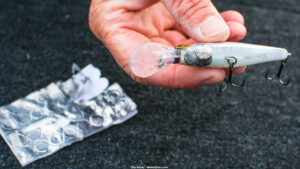 “I mix-up the retrieve so the bait looks natural. On one cast, I’ll give a lure one jerk, then pause, then give it two jerks and then pause again before another jerk. The next cast may be a 1-2-2-1-1-2 pattern. Smallmouth often strike when you change the twitching pattern or shift the cadence. I keep changing these things until I find a triggering sequence.”

Pause the bait – “From summer to autumn, I use longer pauses. They go from 5 seconds, to 10, to 15 seconds by late autumn. Smallmouth can take a long time to hit. I’ve watched them near the boat. They won’t do anything for 10 seconds. Then they smash the jerkbait and almost rip the rod out of your hand.”
Twitch it -“After a pause, I always do a small flick with the rod to barely move the bait. If a smallmouth is looking at the bait, this move often causes them to hit. A hard jerk after a pause can sometimes pull a bait away from a striking fish.”

Be persistent – “Sometimes it takes a while to get smallmouth to bite. They’ll follow a jerkbait but won’t bite it. If you keep at them you can rile them up enough that one pushes out from the pack and hits. Once this happens it means you’ve turned-on those fish. Use GPS or a marker buoy to make a note of the location and get a jerkbait back at them. If you’re quick, you can catch more while they’re still riled-up.”

Change color – “If you have hot, tailgating smallmouth that won’t hit, it usually means you got the jerkbait’s profile, speed and cadence right. Fine-tuning color can be the last step to get smallmouth to bite. Sometimes this change is subtle. Other days a clown colored lure is so off the wall it makes them hit.”

Try a dressed treble hook – “The feathers on a back treble move and sway like a baitfish kicking its tail when the bait’s paused or slowly sinking. Some days this really gets smallmouth going and can put them over the edge.”

QUICK TIP: If these tactics don’t trigger hits, Barnett isn’t above making a follow-up cast with a tube or Senko to try and dupe smallmouth attracted to the boat by a jerkbait.

Scanning spots – “I use my Lowrance HDS-9 Gen2 Touch to DownScan areas. It gives a much better picture of bottom than conventional sonar. I can see exactly where big rock stops and transitions to pea gravel. Or areas where a jagged pile of rocks come off from an island. These irregularities often stack-up smallmouth. I also use DownScan to find the spine connecting two pieces of structure on a saddle. I’ve caught some brute smallmouth from these spots.”

Clean rock humps – “I prefer clean rock on structure. Crayfish and baitfish seem to prefer it. I don’t like humps coming up from soft-bottom as much because there’s usually algae or weeds on the rock. It’s not good when a jerkbait ticks a rock covered in algae. Once that slime gets on a lure it takes the action right out of it. Weed-covered humps are also toothy critter territory. I’m not a fan of donating expensive jerkbaits to northern pike, so I steer clear of these areas.”

Island irregularities – “When an island’s structure is round it’s not as good. When it’s an irregular, sunburst shape and has jagged fingers or rocky points dropping into deep water, it tends to hold more baitfish. Sometimes these points connect to smaller structures, like a rock pile the size of a car, rising up from 30 or 40 feet of water. These nuggets can hold a lot of smallmouth.”

Ledges – “One lake I fish has ledges almost like stairs. The wall drops down 10 feet, then it has a five foot step that jabs out, before dropping down another 10 feet. I cast a jerkbait parallel to the wall. I try medium- and deep-diving baits until I find the magic depth were the smallies are sitting.”

Catching big smallmouth in autumn is a thrill, but feeling a trophy T-bone a jerkbait at full speed raises the experience to epic proportions. Wet some deep-running jerkbaits this autumn and odds are you’ll become a fan of this high-octane, cold-water approach.

QUICK TIP: Don’t neglect shallow-water
Barnett fishes shallow- and medium-diving jerkbaits over the top of shallow structure, like a reef’s crown, in deep water. It’s an exercise of thoroughness. Even in late autumn, he catches smallmouth in the shallows.

Find more of Tim Allard’s articles and work at his website, timallard.ca.