Throughout my time as a collegiate angler, I quickly learned that penny-pinching was an invaluable trait. Between full-time classes and frequent traveling on the tournament trail, there wasn’t much time to have a “real” job. Either I caught fish or I didn’t make any money. In no position to buy 20 dollar baits at the time, I was forced to “make due” with a skinny wallet. Regardless of what you may think, spending hundreds of dollars isn’t always necessary to catch big bass.

I recently took a trip to the friendly neighborhood Wal-Mart to see if I could pick up five quality fall bass fishing baits – each for less than $6. Before taxes, my total came to exactly $25. Whether you’re a pond fisherman or a weekend angler, these reasonably priced baits will catch plenty of bass this fall.

One of the most versatile, proven lipless baits on the market today, the Strike King Red Eye Shad proves extremely effective throughout the fall season. As the shad make their annual migration towards shallow water, big bass follow. The Red Eye Shad exhibits incredible action in the water, while its free-floating rattles create an enticing sound that triggers bass into feeding. Equipped with premium VMC vanadium cone-cut treble hooks right out of the package, this lure doesn’t require any modifications in order to catch a bunch of fish.

The 1/2-ounce Red Eye Shad casts like a rocket, giving both bank fishermen and tournament anglers access to hard-to-reach shallow flats. Following a long cast, start off with an erratic retrieve, incorporating frequent jerks of the rod tip. Don’t be afraid to let the bait free-fall, either—the Red Eye Shad has a unique fluttering action as it falls. Burn it through shallow water for explosive reaction strikes. 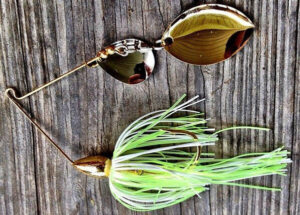 Designed by Elite Series pro Mike McClelland, the 5/16-ounce War Eagle Finesse Spinnerbait is the real deal. I have personally caught some bona fide pigs on this bait, and I always have one nearby when I’m on the water. The War Eagle Finesse Spinnerbait comes equipped with a dual-length Bass Eagle pro series skirt and a mean Mustad Ultra Power Point hook; so once again, it’s ready for the water straight out of the package. As with any blade bait, however, I strongly suggest using a trailer hook—I’ve had my heart broken too many times when not using one.

When it’s cloudy and windy, a spinnerbait draws a lot more bites. When the bite is extra-tough, I’ll slide a small, plastic trailer up the shank of the hook for added action. I love to slow-roll the War Eagle Finesse Spinnerbait just beneath the surface while targeting wood structure and grass lines around flats. The bass crush this fall staple.

The Rapala Crankin’ Rap-5 is an all-purpose squarebill with serious durability. Bang it on stumps, rocks and everything in between—it can handle it. The realistic, etched scale patterns on the body of the bait make the Crankin’ Rap great for both clear and stained water applications. The distinctive rattling sound attracts bass in all situations, making it a great choice for highly-pressured public fisheries. Bank fisherman will love this bait, as it avoids hang-ups well and only dives 5-feet deep.

The Crankin’ Rap is awesome around cover. Make long casts to efficiently cover water while momentarily pausing the lure when it hits a piece of cover to entice reaction strikes. An erratic retrieve is often most effective, but be sure to experiment with different retrieval rates for optimal success.

The fall season is buzzbait season, and with fish feeding aggressively on migrating shad, the big profile of the Strike King Buzz King can produce some heart-stopping blowups. The Diamond Dust head and silicone skirt hold up well after multiple fish catches, while the big three blade prop makes a ton of commotion in the water. The big prop also makes it easier to fish the Buzz King with a slow retrieve, allowing more fish to get a solid look at your bait.

The Strike King Buzz King works best around cover, so feel free to get up close and personal. I like to make long casts and burn it back to the boat initially, picking off the most aggressive fish. Before you move to a different area, always make a few casts with an ultra-slow retrieve, with the prop of the bait barely making a disturbance—sometimes it takes a little extra coaxing to make the big girls bite.

The Zoom Salty Super Fluke is the “ole faithful” of bass fishing lures. I don’t have enough fingers or toes to count the number of big bass I have caught on this bait. When fishing in tough, clear water conditions, not much will out-fish a Super Fluke as it’s a perfect imitation of an injured or fleeing baitfish. When rigged weightless on a 2/0 EWG worm hook, the Super Fluke hits the water quietly while swooping and darting through the water with ease. A breeze to skip under docks and around any type of cover, the Zoom Salty Super Fluke is a timeless fish catcher.

The Zoom Salty Super Fluke can be fished in almost any location, under any conditions. Make long, skipping casts to imitate a fleeing baitfish, followed by short, quick snaps of the rod tip. For the most lifelike action, I recommend using a high quality, 8-pound test monofilament line such as Sunline Super Natural Monofilament.  Keep a close eye on your fluke throughout your retrieve, as most of your bites will occur on a slack line. It’s a exciting sight to see a fat bass boil on top of your fluke. 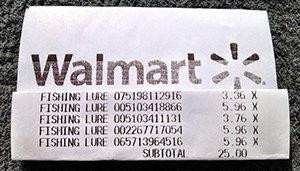 Catching big bass doesn’t always have to cost big bucks. While some high-end lures are definitely worth the money, they’re not always necessary for a fun weekend on the water. For less than $30, your local tackle provider can arm you with a few essentials – inexpensive baits can produce some lifelong memories. Fun while fishing doesn’t have to cost an arm and a leg.