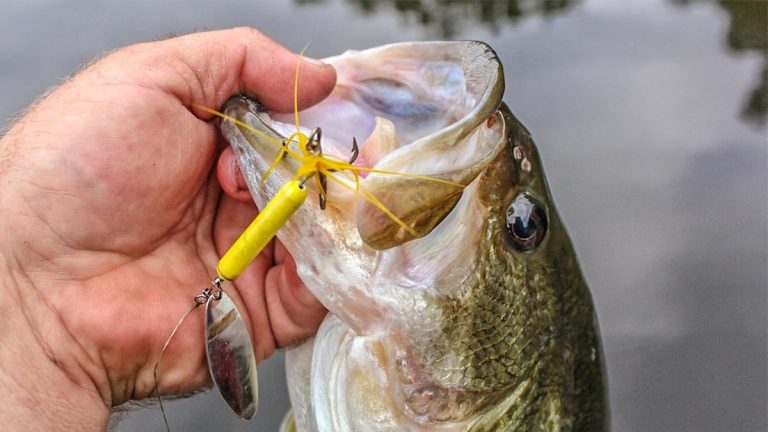 Fall is finally here. The sweltering summer is behind us and forage is on the move. As the waters cool each year, shad move shallower and push back into pockets and creeks by the thousands. The bass follow the bait and soon, you have a situation where the bait has gone as far as it can go and the bass attack their cornered quarry.

On the front end of this transition, the bass are aggressive and you can catch fish on almost anything. But within a day or two it seems, the bass quickly become dialed into the real thing and bites can be hard to come by even with bass busting the surface all around. That’s when I like to do something just a little different.

Matching the hatch is still important. But in a situation where a bass has literally thousands of the real deal available to target, you have to do something slightly different. If you match the hatch perfectly, you’re asking the bass to pick a needle out of a haystack for you to get a bite. Small blades make a big difference in these conditions.

Baits with small blades do a good job of mimicking the shad but also hold the key of being able to separate themselves from the pack; the flutter. Pausing or ‘killing’ a bladed bait during the retrieve allows the blade(s) to flutter on the fall, perfectly mimicking a dying shad. And in the fall when the bait is plentiful, that’s your best bet at drawing the attention of a patrolling bass.

So without further ado, here are five baits with small blades for the fall.

Lipless crankbait with a blade

Bill Lewis makes a 1/4-ounce Rat-L-Trap with a small willow leaf blade in place of the back hook called the Spin-Trap. Dad and I always keep a few chrome and blue-back ones in the arsenal for fall ever since one of his uncles waxed him out of the back of his boat with it one year.

A lipless crankbait is fantastic around a lot of bait anytime of the year, but especially in the fall. When yo-yoing a Trap up and down, you’re creating the illusion of a struggling baitfish. But a few times over the years, when the fishing was particularly tough despite the dozens of bass blowing up around the boat, having that little blade on the back of a 1/4-ounce Trap made a big difference.

You can easily replace the back hook on a 1/4-ounce Trap with a swivel and a size 1 or 2 willow leaf blade and accomplish the same thing. Or, I’ve even considered swapping both hooks out with the VMC Bladed Hybrid Treble hooks. I haven’t had the chance to try that yet but can’t imagine it not working. And it would give you two hooks instead of one compared to the original setup.

The lipless crankbait is great for fall fishing around bait, but it can’t go everywhere. So a compact spinnerbait is probably my second most favorite bait in this scenario. I like a 1/4-ounce spinnerbait for this or maybe a 3/8-ounce one if the bait is still really compact with small blades. A 1/4-ounce can be a little harder to throw, but it can also be fished slower and has a slower fall, so I stick with that size when I can.

The Nichols 33 Mini Double Willow Spinnerbait is a great example of what I’m talking about. A nice, compact spinnerbait with two small (size 3) willow leaf blades. This is the perfect bait to keep on deck in the fall to pick apart shallow cover that would be a little to sticky for treble hooked baits.

Just as you near or clear the cover, you want to kill the bait and let the blades flutter on the fall. With so much bait around, bass will often set up on a log or a stump and wait to ambush passing prey. When they see or feel that bait pause, they’ll explode on it more often than if you just maintained a steady retrieve by the cover.

Naturally I like silver blades usually and a white or shad-pattern skirt when fishing this way. But every now and then it’s nice to move even a little further away from the match the hatch mentality and throw the bass a chartreuse curveball. Making that adjustment to a more aggressive color, even in clear or greenish water, can be the key to unlocking their jaws when a ton of bait is present. 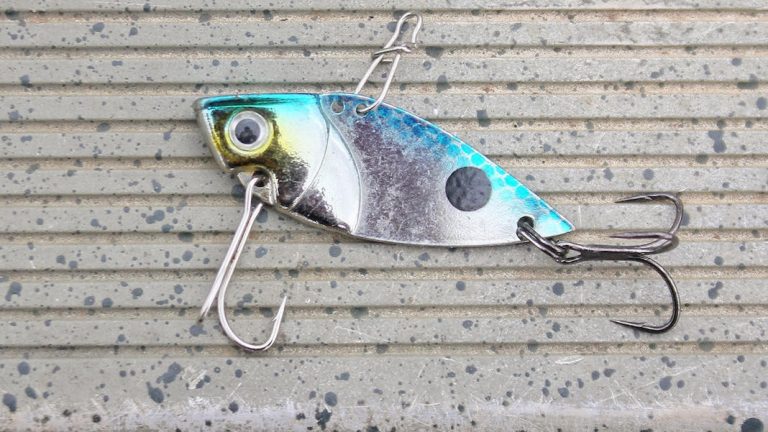 This is one that a lot of people are familiar with, but dad and I just stumbled onto in recent years. But it’s already become a fall favorite. I had seen it in years past but made the ignorant assumption that any fish that would bite a blade bait would bite a lipless crankbait. I can tell you now, those two baits are not the same.

A blade bait differs in several ways. For one, there are no rattles. The only sound it gives off is through vibration. And that level of vibration can be adjusted on most blade baits by moving the line tie clip up or down a series of holes along the back. Move the clip forward, the bait is more subtle. Move the clip backwards, the bait becomes more aggressive with a harder vibration.

Since more vibration means more resistance, you’re also adjusting the speed at which the bait must be retrieved to keep it off the bottom. So in super shallow situations where I’m in a foot or two of water, I’ll have the clip on the last or next to last hole so that I can fish it a little slower while still keeping it off the bottom. And, like with the lipless in the fall, a 1/4-ounce bait is typically where I’ll start.

A bait nearly forgotten by most bass fishermen, the Rooster Tail is perfect for fall fishing around an abundance of shad. This is especially true when fishing for schoolers on a shallow flat. The bait stays up high in the water column and offers a different look from the rest of these baits due to its inline spinner.

It’s heavy, without being bulky. Another advantage to this bait since we are trying to keep things small in the fall, at times even smaller than the present baitfish. Due to its heavy weight despite its small stature, you can use it to make bomb casts in pursuit of those shallow schoolers that always seem to be just out of range of other baits. And a subsurface bait like this seems to get bit more by those fall schoolers than a topwater, especially as the water temps continue to drop.

A spoon is basically just a thick blade, so it lands in this category for me as well. And playing off the same idea of a subsurface bait for schoolers, casting a small spoon can be killer. There are dozens of spoons that will work here, but the Hopkins Shorty Hammered Treble Hook Spoon is an old favorite. Whether you’re fishing for fall schoolers in a foot or over a hundred feet of water, something about the action of a Hopkins Spoon sets the fish on fire.

On a fast retrieve, the bait sporadically skips along the surface and the bass typically boil behind it several times before eating the bait. Regardless of what I mentioned about killing a spinnerbait or lipless crank to get the fish to bite, you want to just keep reeling the spoon. You already have the fish’s attention and it will usually commit to the bait eventually. Often if you kill a spoon, the fish will just turn off or it. And it you kill a spoon in shallow water, the heavy bait is on the bottom in less than a second.

You basically fish a spoon with your rod tip about halfway up and just reel it at whatever speed is necessary for it to skip along the surface and re-submerge every 4 or 5 feet. There’s no need for a heavy hookset. The bass will hook themselves with the exposed treble and if you’re focused on setting the hook hard, you’ll likely end up snatching the bait away from the fish on one of the fish’s initial swipes at the bait.

Instead, just let the rod load up when the fish finally connects with the bait. Using monofilament with this bait is a good idea not only to help the bait ride up since the mono floats, but also because it deadens the sensitivity a bit and will keep you from snatching too early. 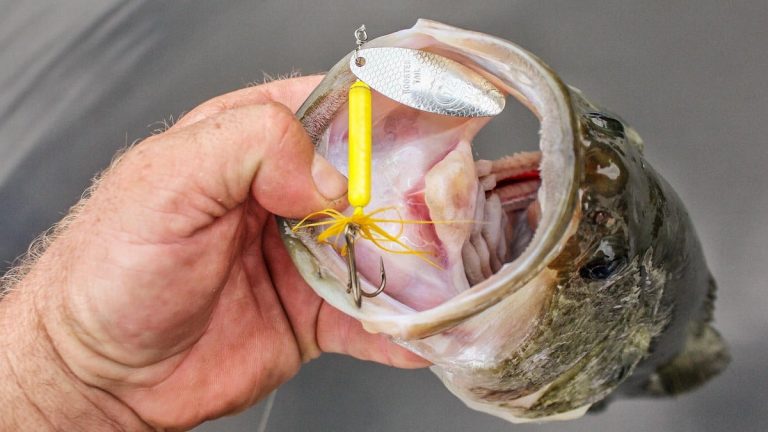 So there are a few options for you to try this fall. All these baits will work throughout the fall and even into early winter. But these five baits with small blades shine particularly bright when the shad are so thick you’d think you could walk on the water.

Using a shad imitating bait to offer the bass what they’re already looking for is important. But doing something slightly different with it is key. Pump and pause spinnerbaits, lipless cranks and blade baits to mimic a struggling shad. Skip spoons along the surface to mimic a shad trying to escape. Play with the color choices of your Rooster Tail if you’re not getting bit. Do something to help your lure stand out and convince the bass that your bait is the one in a thousand that they have the best chance to catch. And if you sell it well, you’ll have them in the boat in no time.