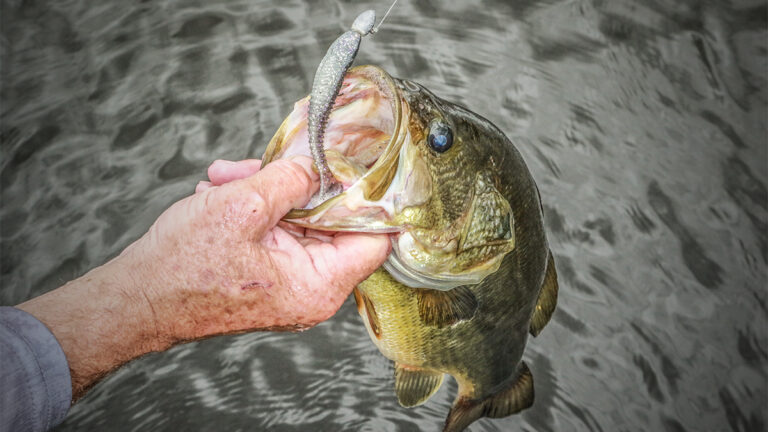 “C’mon in the water’s fine.” Yeah, Mike McClelland’s gonna pass on the invitation for a fall swim — especially in his part of the country.

That said, the pro from Blue Eye, Mo. knows that autumn’s cooling temperatures signal prime swimbait opportunities. A well-rounded angler, McClelland keeps a good selection of options on his deck, but swimbaits will always rank in the top 25 percent.

“For years and years, textbook bass fishing in the fall has been about the shad migration and, in my opinion, there’s nothing that we throw in this day and age that replicates a shad as much as a swimbait,” McClelland said. “When swimbaits first hit the market, they were pretty (simple), but the ones we have now — like the Big Bite Baits Suicide Shad with the eyeballs and the painted finish — look natural.” 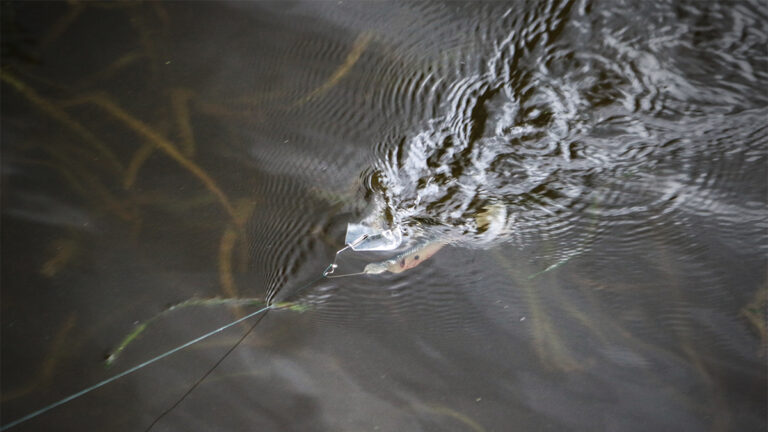 While the soft-plastic body certainly merits attention, McClelland said it’s the delivery system that makes the magic happen. Sporting a hand-painted head that matches the body’s color pattern, the Big Bite Baits Suicide Buzz features a squeaky blade that can be tuned for a clacking sound. Either way, the commotion allows him to mimic the frantic forage look that triggers bass.

“The shad migration is such a big deal and these fish start feeding on whatever baitfish shows up on the bank,” McClelland said. “In some of our lakes in the fall, typically there will be a migration of what we call ‘shore minnows’ — smaller bait that goes to the bank first.

“A lot of times, those fish really key on that smaller bait and that’s a big reason I like that Suicide Buzz. A topwater is always a good bait to throw in the fall and when you combine it with that (realistic looking) swimbait, you have a bait that will not only catch a lot of fish, but also your chance to catch big ones is there too.”

Presentation: Noting that fall bass often feed super shallow, McClelland said he won’t hesitate to throw this swimbait in inches of water — sometimes, actually hitting the bank. Often positioning right off that first shore break, the fish will patrol the skinny water and ravage anything they find. Natural banks, as well as riprap fit the plan.

Tip: “Don’t ever think you’re throwing too shallow in the fall,” McClelland said. “Whether it’s 4 inches deep, 6 inches deep or a foot deep, those fish nose up to that break, just waiting for bait to get between them and the bait. That buzzbait lets you fish as shallow as you need to be.”

“I make a lot of long parallel casts, but when you’re skipping behind boat docks and throwing at specific targets, so much of your cast is wasted,” McClelland said. “Being able to reel up fast is important, as well as keeping a bait moving. That time of year the fish get really aggressive when they’re chasing shad and you want a high speed reel so you can keep your bait moving.”

Lending a hand in designing this swimbait, McClelland wanted a bait suitable for the clear water Midwest lakes he grew up fishing. The Big Bite Baits Finesse Swimmer on a Big Bite Swimmer Head, he said, fits any scenario where fish are chasing fall bait.

Presentation: “The bait is made in 3.4-inch and a 4.4-inch sizes so you can upsize when you get around that bigger shad, but you have the opportunity to throw a smaller, finesse bait,” McClelland said. “The typical scenario for this bait is when fish are suspended over treetops and I’m relying on my Garmin LiveScope to look at those fish under the bait.”

Using a 7-foot, 2-inch medium Falcon rod with a 6.3:1 Bass Pro Shops reel and 10- to 12-pound Sunline Shooter fluorocarbon, McClelland counts the bait down and retrieves it through the bait, over the bait, through the fish — whatever the daily preference dictates.

“You can target individual fish hanging high in the water column when you see them on Garmin LiveScope,” he said. “When you have a fish sitting 3 to 4 feet under the surface, they’re out there on the hunt and when they see one bait like that, it looks like an easy meal for them.”

As McClelland notes, forward-facing sonar such as Garmin LiveScope has made anglers more adept at triggering reluctant fish. Watching pursuits and attacks in real time allows anglers to instantly adjust speed, try a different angle or put a little sumpin-sumpin on it.

“If I make a cast or two and the fish just doesn’t move, I’ll throw over his head and wind the bait super fast directly under the surface,” McClelland said. “Bass would rather feed up, so I generally keep that bait above them and just make quick little snaps with my rod tip as I’m approaching the fish or just when the bait goes by the fish.”

Tip: McClelland finds the hardest bites are the ones, in which the fish comes from a long distance. Throwing into a school, he may experience a lot of fish just nipping at his bait, while one that builds up a head of steam will clobber it.

“It’s unbelievable how far a fish will come to eat a swimbait; they’ll come from 30 to 40 feet deep up to 15,” McClelland said. “So it’s not always the best bait to throw over top of them. Sometimes, it’s better to throw off to the side.” 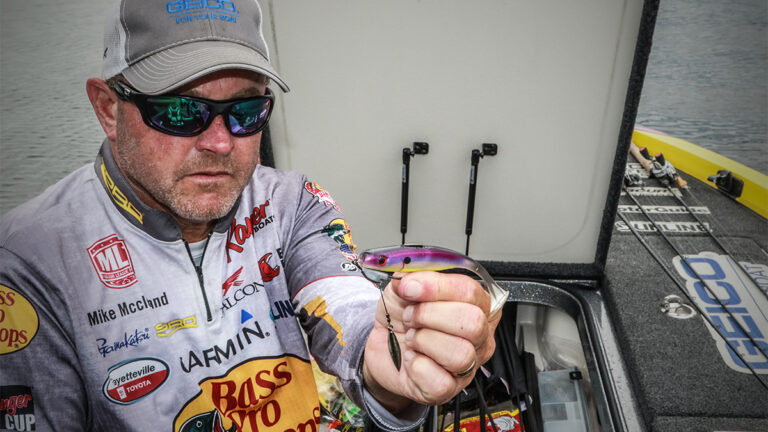 Presentation: Turning to this weedless rig around heavy cover from vegetation, brush, standing timber and cedars, McClelland knows the Spinner Head allows him to take that swimbait into places inhospitable to open-hook rigs.

“A lot of lakes we fish have brush piles behind boat docks and this is a bait you can put in a lot of awkward situations,” he said. “I love to throw an underspin in stained water or when we have a lot of wind. This is a bait I can throw in those same scenarios, but around cover.”

Tip: McClelland notes that he’ll adjust Spinner Head size to depth and bait length (3 1/2-, 5- or 7-inch). This, he said comes in handy when he need to imitate jumbo gizzard shad.

McClelland’s closing advice: Whatever swimbaits you throw, don’t get lazy on the retrieve. Mix it up, note what plays and try to dial in a replicable pattern.