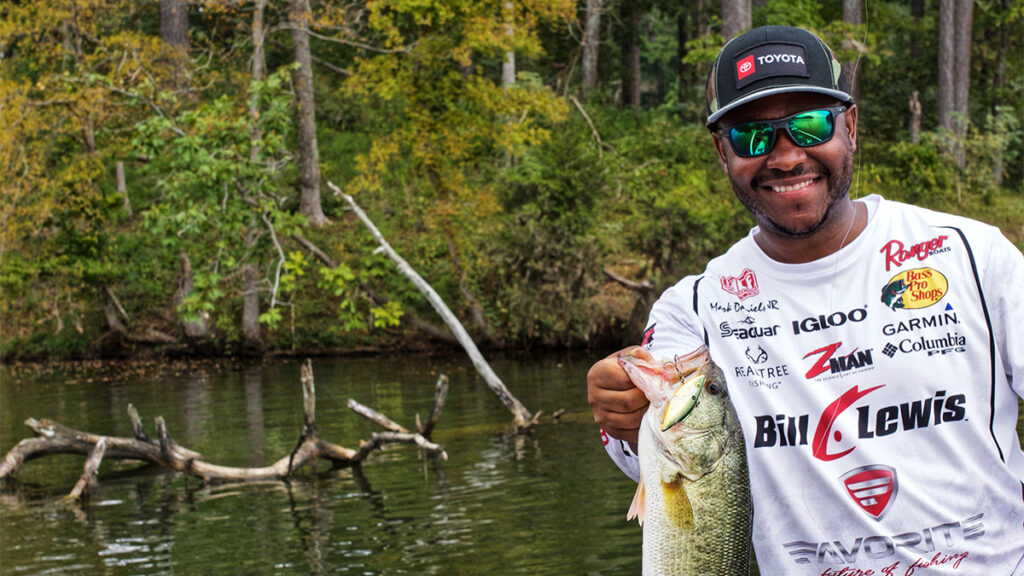 Lipless crankbaits like the original Bill Lewis Rat-L-Trap have helped folks put bass in the boat for years. These baits catch fish all year long but are among the most proven fall fishing baits in any angler’s tackle box. Everyone can catch fish with these lures but not everyone understands the little nuances that help you get the most out of a lipless crankbait.

Professional angler Mark Daniels Jr. is one such lipless crankbait connoisseur who has spent hundreds of hours with this one particular lure in his hands. MDJ first remembers fishing a “trap” when he was ten or eleven years old and has now caught bass from California to New York with this iconic bait. These two tips come as hard-earned knowledge MDJ graciously offered to help you catch more bass this fall. 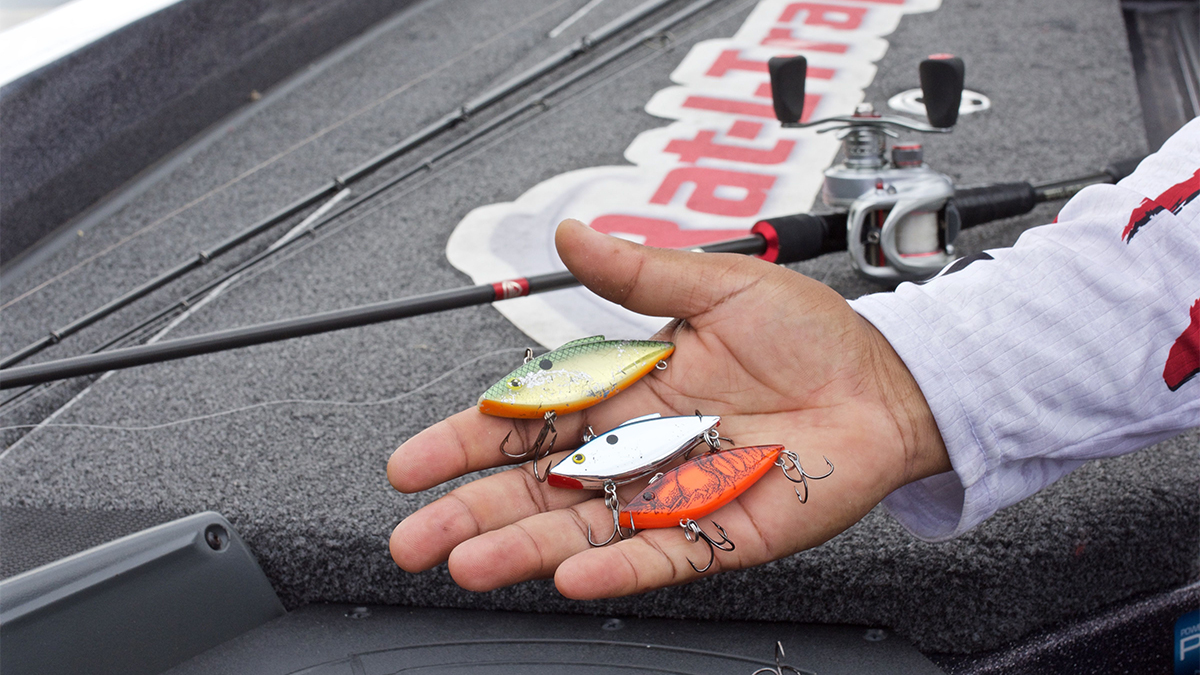 One mistake Daniels Jr. sees a lot of anglers make when it comes to lipless crankbaits is not experimenting with different sizes of the lure. Folks typically take the original 1/2-ounce size and lock it in their hands when they want to fish a lipless. MDJ regularly has two different sizes of lipless crankbaits rigged on his front deck, especially in the fall when the size of baitfish varies widely.

“Sometimes you absolutely need to switch up the size of your lipless crankbait until you find what size shad the bass are keying on,” Daniels Jr. said. “1/2 ounce is the OG but I swear they bite the 1/4-ounce version better in a lot of situations. That smaller 1/4-ounce size is the most overlooked in my opinion. I’ve had days when bass would hit a 1/2-ounce or bigger size but they’d just barely be getting the bait. I’ll drop down to 1/4-ounce and boom—they start choking on it.

“Bill Lewis actually offers a magnum 1-ounce Rat-L-Trap that’s 4 inches long and mimics bigger gizzard shad super well. On the other end of the spectrum, I know tons of crappie guys who not only smash crappie with the Tiny Trap but catch quite a few big bass, too. That thing is only 1/8 ounce and less than two inches long but it still catches ‘em.”

MDJ throws the original 1/2-ounce and larger 3/4-ounce Rat-L-Trap on 7-foot, 3-inch heavy-action Favorite Fishing Pro Series rod, opting for 15-pound Seaguar InvisX fluorocarbon for these sizes. A heavy-action rod for a lipless may scare some folks but MDJ said the tip on this rod is extremely moderate and fishes a little lighter than its name would suggest.

He likes throwing lipless crankbaits on a bit stiffer rod as a quick snap of the rod easily cleans the bait of any vegetation it accumulates on the retrieve. This snapping action commonly causes a reaction strike when the bait frees itself from grass or leaves on the bottom, too.

When dropping down to the all-too-often overlooked 1/4-ounce size, MDJ prefers the 7-foot Favorite Fishing Rush rod, which is medium heavy-action and handles the lighter lure more efficiently. He also likes to drop his line size down to 12-pound InvisX fluorocarbon unless he is fishing around super thick vegetation.

“When it comes to color selection I keep it pretty simple, especially in the fall,” MDJ said. “My top three choices are Chrome Blue Back, Tennessee Shad Gold and I’d still throw Rayburn Red in there. Fall is all about shad but in off-colored water they still react to red. Carrying multiple sizes and colors allows you to show bass something fresh, something they haven’t seen as much of, which will get you more bites.” 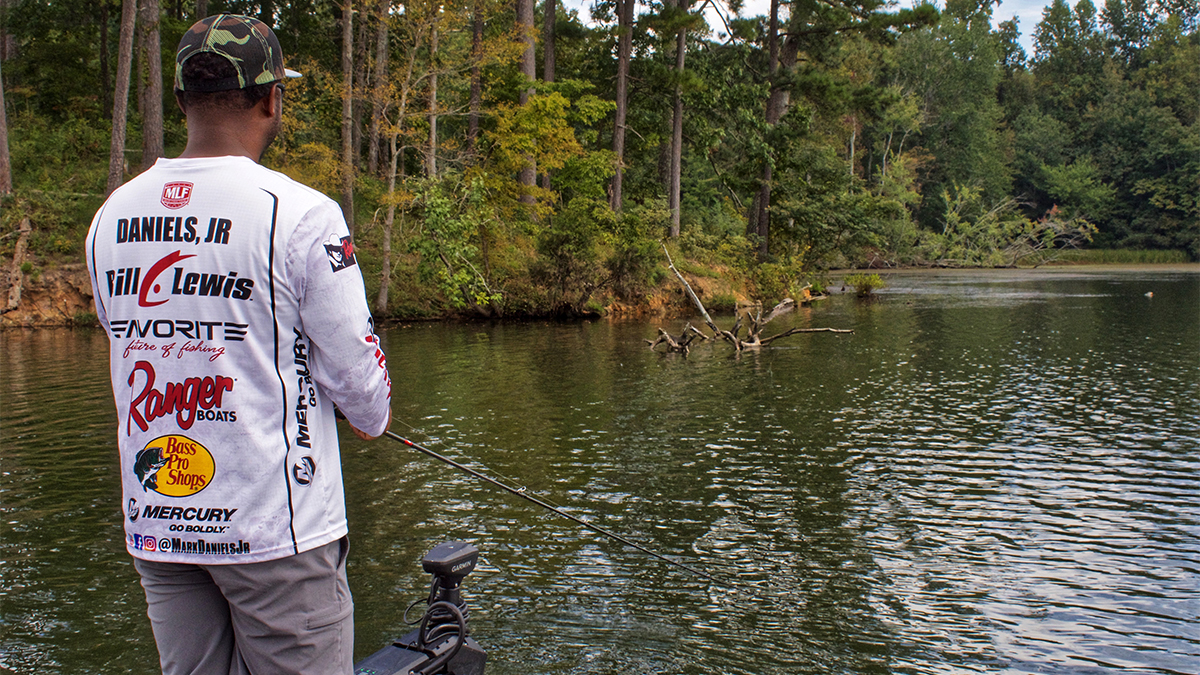 Another way Daniels Jr. has learned to get more bites with a lipless crankbait is to fish the bait in places that other anglers avoid; namely hard wooden cover like laydowns, stump flats and shallow brush piles. Lipless crankbaits have proven themselves as an incredible lure around aquatic vegetation but they don’t get mentioned too much around other cover types.

MDJ has figured out a trick that allows him to bring a Rat-L-Trap through cover most anglers would steer clear from.

“People don’t throw traps around wood because honestly they are pretty bad about snagging,” MDJ admitted. “But if you can slip a lipless through laydowns or around stumps bass will jump all over it cause it’s something they don’t regularly in those areas. To combat a lipless crankbait’s tendency to hang up, I simply take the back hook and split ring off the bait altogether.”

MDJ only takes this action if he specifically focuses his casts around wooden hard cover and always upsizes the front hook in these scenarios. With the standard 1/2-ounce size, he typically upgrades his Rat-L-Trap hooks to two No. 4 Owner ST-56 hooks to improve his landing ratio, but when targeting wooden cover he upsizes the single front hook to a No. 2 ST-56 hook.

“I’ve tried so many hooks over the years because Rat-L-Traps and other lipless baits are notorious for losing fish,” Daniels Jr. explained. “The ST-56s from Owner are short shank and triple the strength of a regular hook with a ridiculously sharp point. I just don’t lose as many fish with those hooks. KVD has proven to the world that short-shank treble hooks catch fish once they have ‘em pinned and I’ve experienced the same on lipless baits.”

With the back hook removed, the bait doesn’t get snagged nearly as often and doesn’t affect his landing ratio when it comes to putting bass in the boat.

If MDJ is fishing the smaller 1/4-ounce version he opts for two #6 Owner ST-56 hooks when fishing around grass but prefers a single No. 4 front hook when targeting wood cover. Upsizing the front hook when he completely loses the back hook is extremely important to getting a hook into fish that react to the bait.

Lipless crankbaits like the Rat-L-Trap have been catching bass for years and are just as effective today as they were when they were developed in the late 1960s. Don’t forget about these proven fish catchers this fall and apply MDJ’s tips to help you get the most out of your lipless crankbaits regardless of the time of year.