If you’re looking for a new way to mount your marine electronics, this new mount from T-H Marine is rock-solid and extremely versatile.

I’ve always been fairly particular in regards to mounting my marine electronics. There have been a lot of different mounts on my boat over the yearsÃ¢â‚¬â€unfortunately, I have the holes to prove itÃ¢â‚¬â€because I’ve had a hard time settling on one specific mounting system. For every one thing I like about most mounts, it seems like there are several things I don’t like.

For the past few months, I’ve had the opportunity to test the new KVD KONG Extreme Electronics Mounts from T-H Marine with my Lowrance units. They’ve performed excellently and are much different and more versatile than any mount I’ve used thus far.

First things first: This is not a wimpy mount. It’s made entirely with 6061 T6 Aircraft Aluminum and stainless steel that’s 100 percent rust-resistant for both fresh and saltwater applications. You can beat it to death and be rough with it and it will take the beating with no issues whatsoever. I’ve certainly tried it. 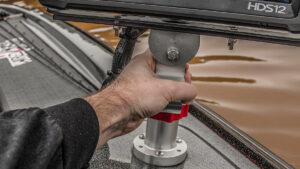 Most importantly, however, the T-H Marine KVD KONG Extreme Electronics MountÂ locks your graphs into place and does not allow them to move, regardless of how rough the water conditions might be. There’s nothing more irritating than making long runs on rough bodies of water and constantly having to readjust your mounts anytime you hit a wave. I’ve purposely tested this mount in inclement weather conditions and once you have it locked into place, it will stay there for the rest of the day. You can make long, rough-water runs all day long and you won’t have to lay a finger on these mounts.

The stability is a huge deal for me. Most of my old graphsÃ¢â‚¬â€especially the ones that were used on the bow of my boatÃ¢â‚¬â€look like they were dragged behind a pickup truck. Every time I’d hit a wave, my previous mounts would loosen and make my bow-mounted graph look like a headbanger at a heavy metal concert. That poor dude would be slamming against my trolling motor mount, the floor, my trolling motor pedal and everything in between. Over time, this resulted in several frayed wires and lengthy repairs. To date, I have not experienced a single inch of movement since installing the KVD KONG mounts.

Anglers will also be able to appreciate how easy the mounts assemble and disassemble. You simply unscrew the red nut, lift upwards and turn the mount counter-clockwise a half-turn and the entire mount slides out of the base with your graph still attached. This makes it easy to take your graphs inside for safe keeping, whether you’re on the road or at home.

I run a Lowrance HDS-12 Gen3Â at my console and a Lowrance HDS-9 Gen2 TouchÂ at my bow, so I was really curious to see how well these KVD KONG Mounts would handle such large units. Aside from convenience, I wanted to make sure that these mounts would keep my Lowrance units safe and undamaged in rough water. 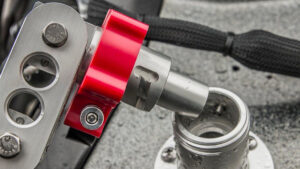 I’ve absolutely love how easy these mounts have made it to quickly load my boat and go fishing. I keep all of my electronics in my house when my boat isn’t in use, and with some previous mounts I’ve used, I’d have to readjust them to my liking each and every time I loaded up to hit the water. It never failed, eitherÃ¢â‚¬â€I never got ’em quite right in my driveway, so I’d always have to mess with them once I got my boat in the water. And again after every wave I’d hit. 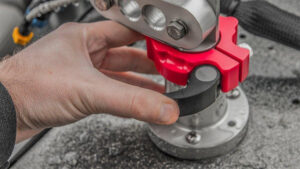 These particular mounts stay locked in place and will not move until you put a wrench to ’em. I know I’ve said that a few times, but that’s the entire point of this design. Each time you put your graphs on your boat, they’re exactly where you want them. All you have to do is tighten the arm to the base of the mountÃ¢â‚¬â€no screwing around in the driveway or on the water. I often only have a few hours before dark to fish, and this mount has helped me load up and get on the road quickly and without hassle. 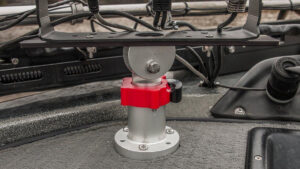 On my bow-mounted KVD KONG, I decided to go without the middle adjustable arm. The angles didn’t quite work for my boat layout and it also put my HDS-9 Gen2 Touch a little too high for my liking. I like to pitch and flip, so I was worried I’d shatter my screen with a jig. But after taking the middle arm out, the mount was just as solid. My graph sits close to the front deckÃ¢â‚¬â€just how I like itÃ¢â‚¬â€and has absolutely no play throughout a day of fishing. Consequently, my Lowrance looks as good as the day I got it. No scratches, scuffs or messed up wires.

I actually had a hard time deciding where to put my console KVD KONG Mount because the possibilities were almost overwhelming. You’re able to adjust it to just about any configuration you can imagine, which can result in some really cool and innovative mounting options. I decided to mount it next to my console in order to cover up the holes from my previous mounting base, and it has worked out remarkably well. 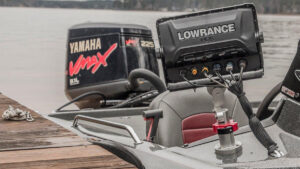 These are great mounts that I will be using for a long time. It doesn’t hurt that they look sharp, too. I’ve already had a bunch of people ask me about ’em at gas stations and boat ramps. I baby my Lowrance units and I’m glad to have found a mount that keeps them in place no matter the conditions.