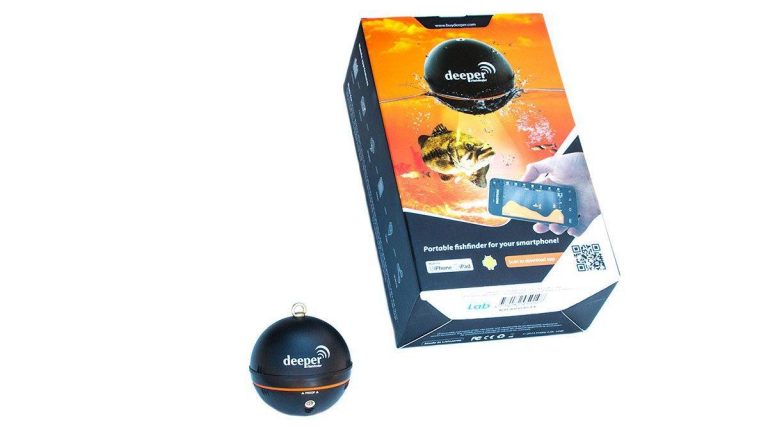 Although I own a bass boat, it’s not uncommon to find me sitting on the bank of a farm pond or on a dock watching a bobber during the weekends. It makes me feel like a kid again and it brings me back to my “fishing roots”, I guess you could say. Not to mention, it’s a welcomed break from the hustle and bustle of tournament fishing and guiding.

I tend to have a special affinity for products and gear that are designed with simplicity in mind. Not everyone can afford the “latest and greatest”, so I go to great lengths to test practical equipment that can help the occasional or novice angler catch more fish.

With that being said, I’ve spent a lot of time experimenting with the Deeper Fishfinder over the past several weeks. Essentially, it’s a depth finder and fish finder built-in to a bobber-type design. According to the instructions, you simply tie it on an extra fishing rod, cast it into the water and read its findings on your smartphone. How crazy is that? I had to see if it was a smart investment for fellow anglers.

After extensive testing, I’ve learned a lot about the pros and cons of this device.

How to use it 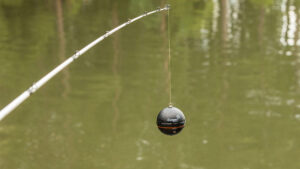 For whatever reason, I didn’t receive a comprehensive set of instructions with the Deeper Fishfinder. There were about 20 small pamphlets in just about every human language imaginable, but nothing that really told me what to do. So I did what any person what doâ€”I found an instructional video on YouTube and watched it from my phone while sitting on the dock. Fortunately, the video made simple sense. 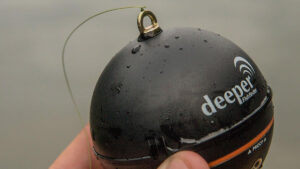 Essentially, I tied the Deeper onto an extra fishing rod with 30-pound braided line to avoid breaking it off and unintentionally sending it into orbit. Then, I placed it in the waterâ€”it automatically turns on when it enters waterâ€”and connected it to my iPhone 5s via bluetooth after downloading the Deeper Fishfinder app in the App Store.

Following a two-minute mandatory update after launching the app, Deeper began relaying information to my phone. I could see the depth, water temperature and a few irregularities along the bottom of the lake. Pretty slick, right? 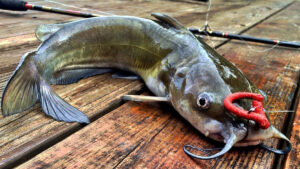 What happened next got me a little excited. I started hearing beeps and seeing fish symbols along the 5-foot bottom. So I grabbed an old Zebco from the boathouse, threw some Berkley Gulp! Nightcrawlers on a rusted hook and cast my line directly next to the Deeper sonar unit. And what do you know? I caught a nice channel catfish. Now keep in mind, this happened in glass-calm waters while the receiver was stationary and no more than 15 feet from my phone. 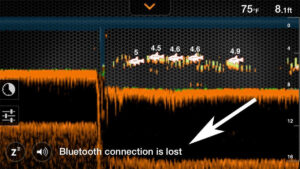 So naturally, I pushed the proverbial envelope. The box states that the maximum bluetooth range is 160 feet, so I bombed that sucker approximately 100 to 120 feet from my dock. The readings continued to transfer to my phone without issue, but I did experience some connectivity issues anytime a stray boat wake would come near the Deeper sonar. Most of the time, I could reconnect to the sonar unit manually from my phone, but there were a few instances in which I had to reel the sonar back to the dock in order to reconnect it.

I could arbitrarily cast Deeper into the water and trust its readings, but I didn’t think that would be a very worthy test. So I put my boat in the water and compared it with my Lowrance units. I totally trust and rely on these units throughout the entire year, so I wanted to see how accurate Deeper really was. 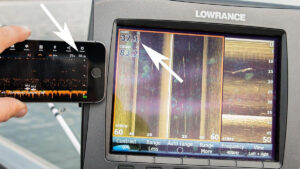 The depth readings were very accurate while both Deeper and my boat were at rest, sitting totally still. Looking at my photos, you’ll notice an 2-foot deviation between the two unitsâ€”my Lowrance was “telling” me that the water was approximately 2 feet shallower. But if you think about it, it makes sense. My Lowrance transducer is mounted roughly 2 feet below the water’s surface on the bottom of my jackplate, while Deeper sits directly on the surface.

I conducted many at-rest tests at various depths and continued to compare Deeper’s readings to my Lowrance. The approximate 2-foot deviation remained constant, which tells me that this device is, in fact accurate while at rest on the water’s surface. 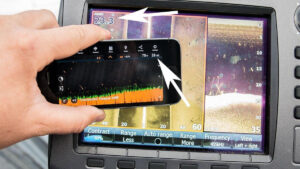 Next, I tested Deeper at a 2.6 mile per hour idleâ€”essentially, I put my boat into gear and didn’t touch the Hotfoot pedal. The deviation jumped to 6 feet between Deeper and my Lowrance. But anytime I slowed my boat down to below 2 miles per hour, the deviation returned to an accurate 2 feet. I don’t think this idling issue is too big of a deal, however. I can see this product being most popular for bank, kayak and johnboat anglers, so I don’t believe excess speed will be much of a factor.

Now let’s talk about water temperature. Deeper’s water temperature readings didn’t move 2 degrees in either direction of 75 degrees throughout my testing. My Lowrance units were consistently hovering around the 83-degree mark. Maybe it was user error on my part, but I honestly don’t believe that to be the case.

As far as fish detection goes, I was actually quite surprised by how well Deeper detected subsurface activity. It showed the catfish that like to hang out in front of my dock and it detected the presence of bait excellently. It did, however, have some issues deciphering bait balls from game fish. So personally speaking, I would turn off the fish ID optionâ€”it’s easily done on the appâ€”if you’re looking to decipher fish from bait balls.

Deeper is also quite accurate when detecting structural changes on the bottom of a fishery. In other words, when my Lowrance units detected the drop on the end of a point or the rise of a river channel lip, Deeper followed suite without any issues. 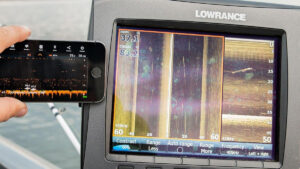 I’ll be honestâ€”I think I had unrealistic expectations for Deeper’s image quality. After spending several years staring at the hi-res images of my Lowrance units, I may be a bit spoiled. So keep that in mind as we discuss image quality.

For a $230 unit, Deepers image quality is good. I could see clouds of bait, individual fish signatures and bottom composition changes without a problem. It’s definitely not as detailed as a boat-mounted sonar unit, but its readings will certainly let you know when there’s something down there worth making a few casts towards.

In regards to hard cover, this device detects it well, but it’s not always going to stick out like a sore thumb. It’s going to take a little bit of practice and confidence building on your part, but I’ve found it to be a suitable option. In other words, you’ll have to pay close attention to your smartphone or tablet’s screen in order to detect subtle cover such as single logs, stumps and small brush piles.

I’ve heard some folks complain about the battery life of Deeper’s sonar unit. But I haven’t had any issues with it. While I’m a little curious to see if it will last a full 2 months on a single chargeâ€”that’s what it says on the boxâ€”you shouldn’t have any issues using this device for a full day of fishing. 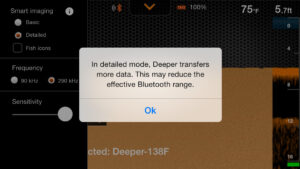 Worth noting, however, is your phone or tablet’s battery life. The last time I used Deeper was for approximately 2 hours. The fish weren’t biting while I was on the lake, so I took it out and tinkered with it because it’s actually pretty fun to play with. During that 2 hour period, my phone battery dropped from 70 percent to 21 percent.

If you use Deeper with a tablet, however, the battery life will most likely be less of an issue. 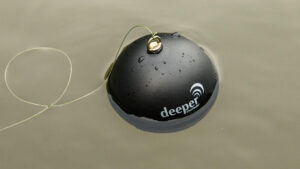 If you fish from the bank, a kayak, canoe or johnboat, I think this device is worth consideration. Are you going to get the same features, versatility and image quality as the high-end sonars you see mounted on pro anglers’ boats? I doubt it. But if you’ve always wanted to explore the offshore element of your favorite small body of water, I think it would be a pretty neat thing to have.

It’s priced at $231.95 on Amazon. Yes, I know that kind of money doesn’t sprout from the ground. It’s not a small investment. But if the high-end, boat-mounted units aren’t in your price range, this is a suitable alternative. It does have some shortcomings, but there are situations in which it would be pretty darn valuable.