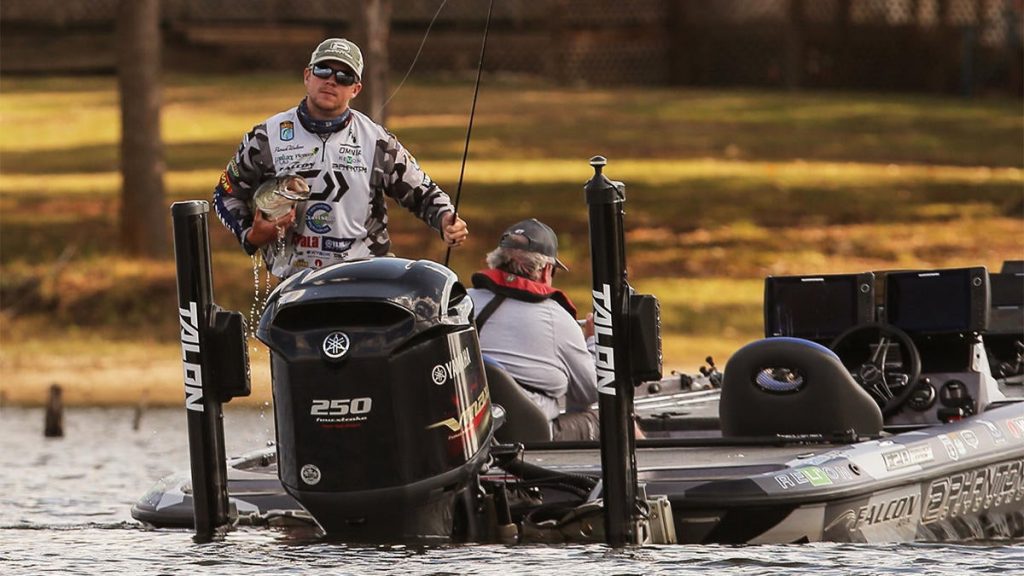 I make a concerted effort to avoid hyperbole in my writing, so I had reservations about using the word “historic” in this piece, but there’s simply no other way I can articulate what happened this past weekend during the Elite Series tournament on Lake Fork. Patrick Walters absolutely smoked the field and beat second place by 29 pounds.

Read that again. It’s not a typo.

He beat some of the best anglers in the world by 29 pounds. He could have stayed at the dock on the final day and still won. He didn’t even have to make a cast.

He doubled the previous record for margin of victory in Elite Series history. On a stingy Lake Fork when the fall bass were giving anglers all kinds of trouble, Walters found a golden ticket in the form of suspended bass in standing timber located on the main lake. As bass anglers, we’ve always been taught to stay in the creeks throughout the fall. Walters, however, proved a lot of us wrong by avoiding them and finding a pattern no one thought would be happening.

Over four days, he weighed 104 pounds, 12 ounces fishing something nobody else found.

In my opinion, this victory is the most monumental moment in bass fishing since Paul Elias won on Guntersville with the Alabama rig in 2011. Give me a minute to explain why I think that.

It opened our eyes to another population of bass 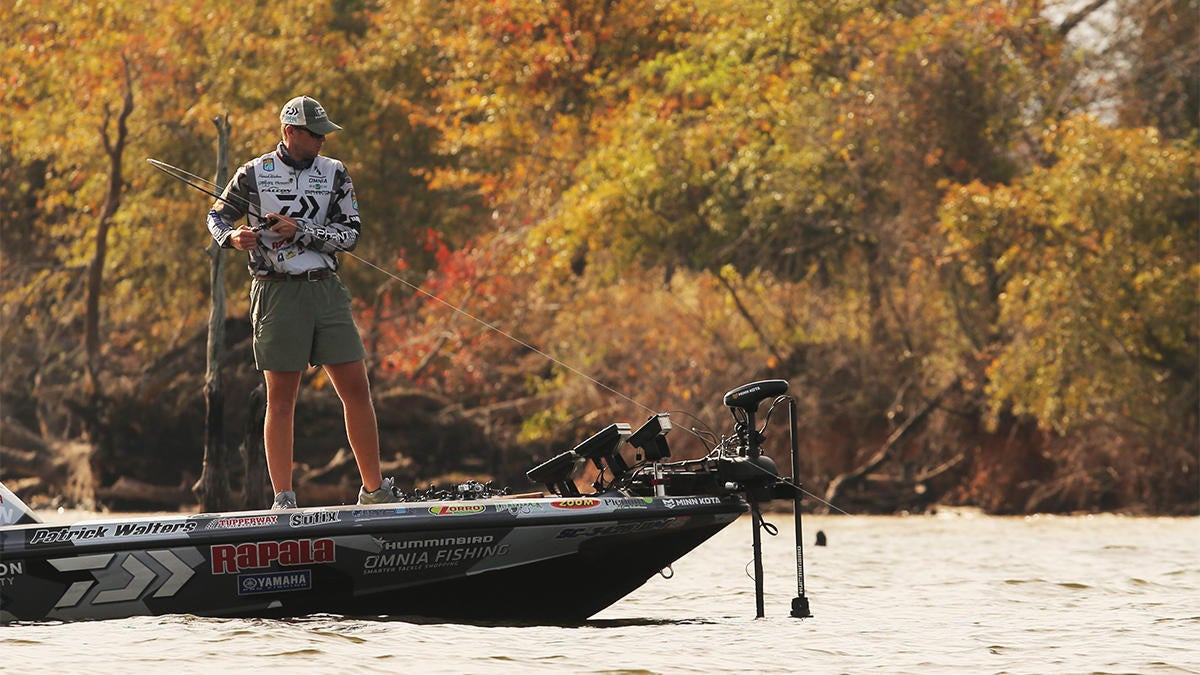 Like I just mentioned, if you put 100 bass anglers on a random lake in the fall, all 100 will probably head into a creek somewhere to start looking for a sustainable pattern. The baitfish migrate to the shallows and you have to fish creeks to catch ’em in the fall, right? That’s what has been pounded into our brains for decades.

It’s no secret that Walters was using technology to his advantage at Lake Fork. He has told me how hard he’s been working to learn and master both the Humminbird MEGA 360 Imaging and Garmin LiveScope technologies recently and it totally paid off for not only this tournament, but the Hartwell Bassmaster Open tournament he won this season as well. While scanning main-lake standing timber with his LiveScope and MEGA 360 Imaging in practice, he ran across a totally ignored and unmolested population of bass.

While everybody else was targeting creeks and shallow cover, Walters was all by himself, in a labyrinth of standing and submerged timber without a single competitor in sight. You’re just not supposed to catch ’em like that this time of year.

But did he ever.

This opened the eyes of tens of thousands of anglers and quite frankly, Lake Fork in particular will never be the same after his win. The cat is out of the proverbial bag now and all of that timber is going to get hammered for years to come. Heck, I’m already making a list of lakes near me that have standing timber because I want to use my units to find a pattern like Walters did.

I remember back when Elias torched the field and unveiled the Alabama rig in 2011. You couldn’t find a bridge anywhere in the Southeast without some guy chucking a homemade Alabama rig on it. People were literally making them out of coat hangers just to try and get in on the action. It was an enormous movement that will never be forgotten and honestly, I think Walters’ win on Lake Fork is going to result in a similar movement, especially when it comes to understanding technology and fall fishing. His electronics expertise exposed a population of fish that never gets bothered and people are going to look for the same thing all around the country now.

It finally pushed the average angler over the edge 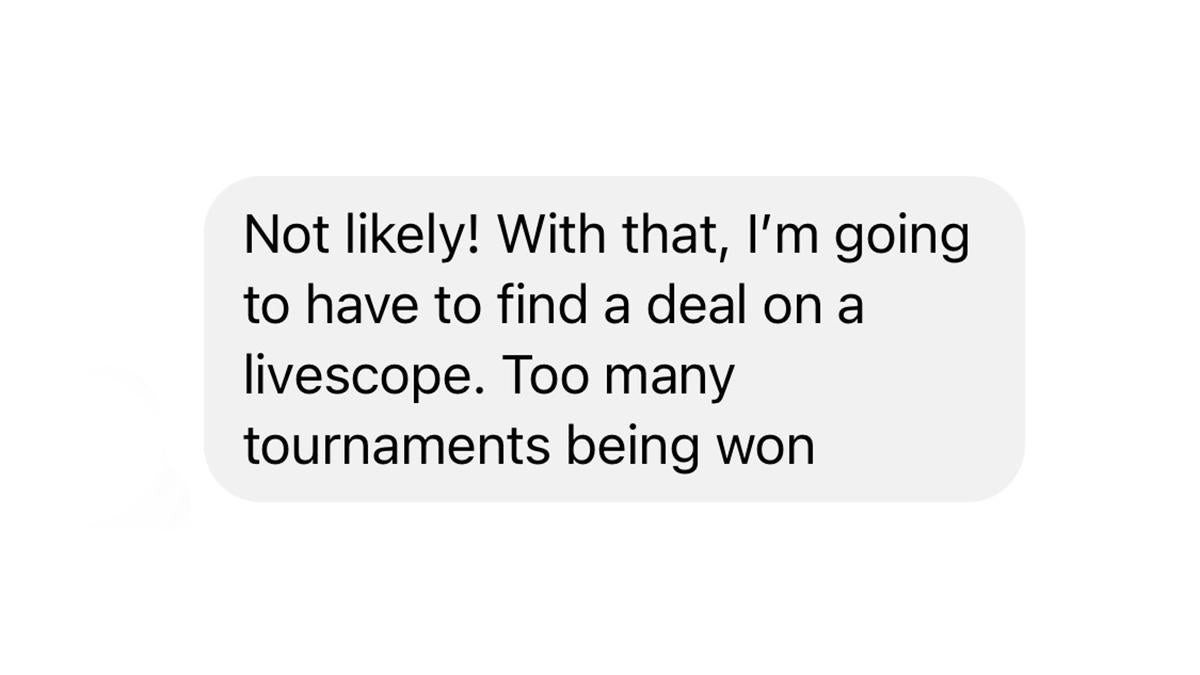 After Walters won, I told my wife on Sunday night that the sheer dominance of his win will be the moment that finally convinces the Average Joe to save up and invest in similar technology.

Sure enough, within an hour, I had several buddies DM me on Facebook or text me saying some version of, “That’s it. I have to upgrade my graphs. I’ve been putting it off but I can’t get left behind.”

Some of the more old-school anglers gripe about the huge technological advancements that have been made recently in bass fishing but whether you like it or not, it’s here to stay. Now you have folks who legitimately feel like if they’re not using certain technologies, they’re going to get beat by it every tournament. Lots of anglers were undecided about upgrading their units, but man, a nearly 30-pound victory on the Elite Series can change minds in a hurry.

I think it will change electronics sponsorships 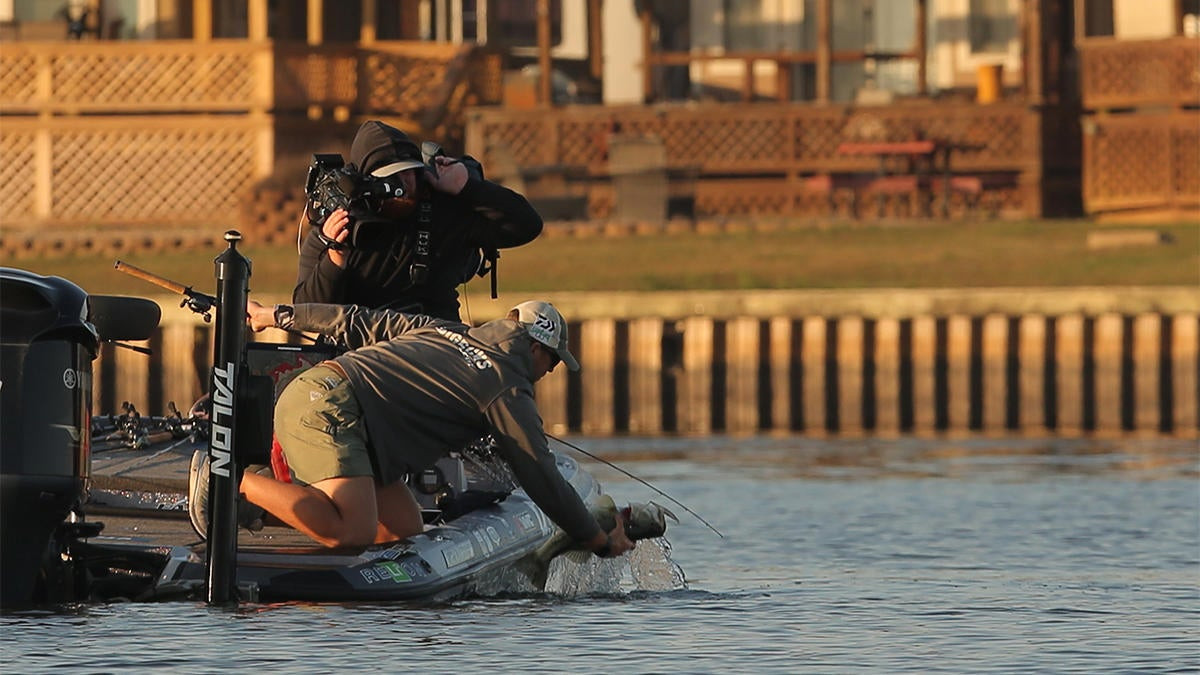 Don’t be surprised when you start seeing more professional anglers opt to become “free agents” in regards to their electronics. With so much incredible technology out there from several brands, it forces the pro anglers to make a tough decision.

Do they stick with one brand and not have access to every available technology? Or do they bite the bullet, eat the cost of getting their own electronics in order to utilize every technology possible? We’ve already seen guys like Jacob Wheeler, one of the best anglers in the entire world, choose to become a free agent. I would expect you’re going to see a lot more of that this upcoming season as well.

This could also spur an influx of anglers choosing to sign deals with electronics dealers instead of electronics manufacturers. Essentially, the dealer will buy whatever electronics the angler wants and install them in exchange for sponsorship. This will free up a lot of anglers and allow them to talk about any brand or technology they desire following a high finish.

There’s absolutely no doubt that each of the manufacturers have incredible technology that makes their units special. Anglers are going to have to make a decision and choose what is most important to them.

Learn it or get left behind 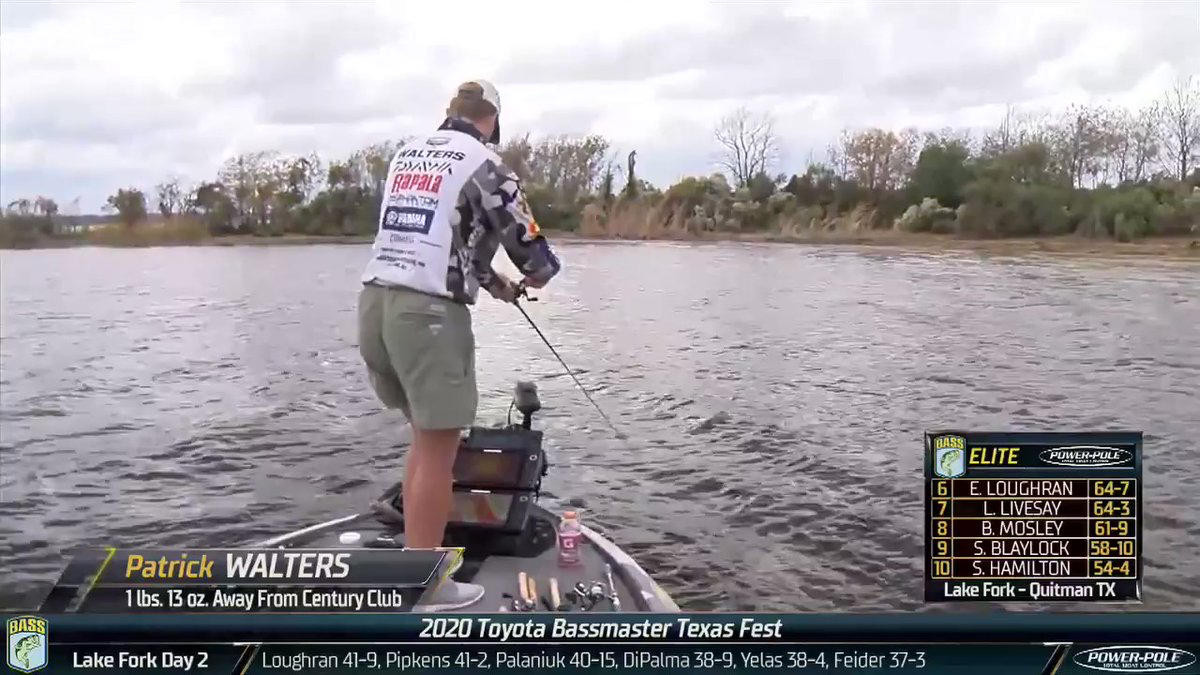 Listen, I’m one of the biggest bank beaters to ever hold a fishing rod. I’m not crazy about fishing deep water and I grew up pitching a jig in muddy water you could measure with a stick.

But man, guys like me are at a pivotal time right now.

Either learn the technology or get beat by it. There are huge populations of bass out there that we didn’t even know exist. But now they’re being revealed. The gig is up. They’re going to be the reason for a lot of tournament victories from now on.

I’ve heard a lot of complaints about technology advancements from professional anglers over the past few years. But now you’ve got guys now like Patrick Walters and Jacob Wheeler who buy their own electronics and spend nearly every day, daylight to dark, learning every single nuance of them. And they’re flat-out catching ’em.

If a carpenter refuses to put down his hammer for a new nail gun, he’s costing himself money. I think it’s going to be the same way with pro anglers and electronics. If you’re stubborn and resistant to really sitting down and spending time learning your units, you’re costing yourself money. But at the same time, if you’re not willing to commit the time to fully understanding new technology, don’t even buy it. It doesn’t do you any good if you don’t know how to use it.

It will cause some anglers to struggle at first 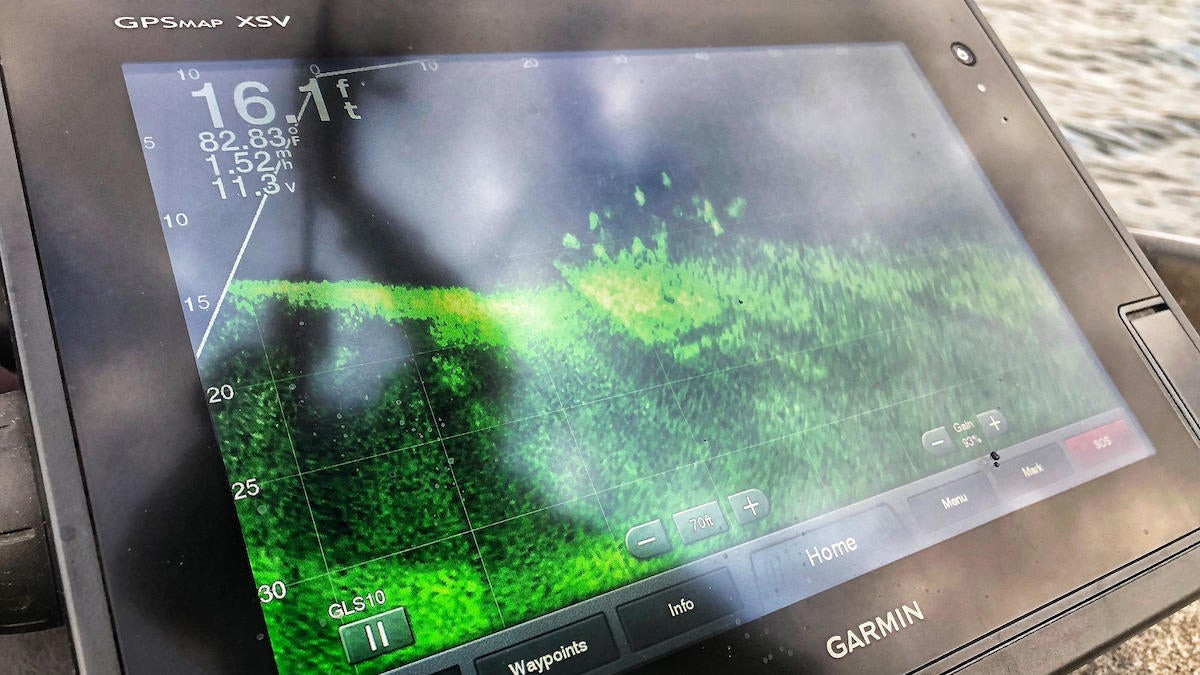 When I put LiveScope on my boat, I was like a cat chasing a laser pointer for the first few weeks. I’d see a fish on that screen and I’d end up following it for hundreds of yards. When I finally picked my head up, I could hardly recognize where I was. I was incredibly distracted until I started learning more about its uses and applications.

That’s going to happen to a lot of people, regardless of the technology they end up choosing. Just because you have the technology doesn’t mean you’re going to load the boat on every fishing trip. You’ll still have tough days and you still have to catch them. For me, I think it can be even harder to catch a fish when you can see ’em in front of you. It’s incredibly frustrating and can play games with your head.

After the Lake Fork tournament, Walters told me that he found a tree with his MEGA 360 and chased a single bass from it for 200 yards using his LiveScope. Finally, after countless casts, he got the bass to bite his jerkbait and it ended up being one of his better fish of that tournament day.

You can’t expect that to happen every time, though. So there are going to be a lot of hard lessons for anglers during the learning process. Guys are going to have to learn when a fish is catchable and really study their behaviors on the screen before dedicating an inordinate amount of time to them.

Technological advancements, like the ones we’ve seen recently in the fishing industry, only make things better. It causes competition between both manufacturers and anglers which, in turn, results in better overall products and more exciting tournaments.

Can you still go out and pitch a jig at boat docks and catch 20 pounds? Absolutely, you can. But there also might be a young man floating in a sea of timber without anyone in sight, with 30 pounds in his livewell fishing a pattern you never even thought to look for.