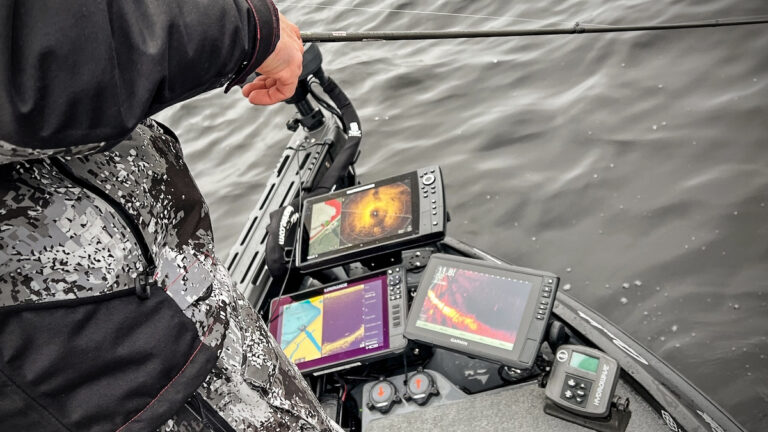 Once upon a time, anglers went on the water and caught bass without the aid of electronics. I know, the way the bass-fishing world is now, that statement sounds like some mythical fairy tale about a land far, far away. Honestly, it seems about as likely to be true as a talking donkey and a big green monster with hyacinth-shaped ears.

But there was a time when that was, in fact, true. Then paper graphs with literal printouts came along and flashers that marked depth and anything that came directly between the beam and the bottom. Then 2D sonar was responsible for a big leap forward. After all that, it seemed like the whole bass fishing world exploded with the advent of technology that could clearly draw pictures of what had just passed under and to the side of the boat.

Shortly thereafter, the bass fishing world was flipped end-over-end again when live images started being relayed. No longer were we looking at where something just was.

Now, we could see where it is.

This is where we currently are. Even these are just the advancements in sonar technologies. This doesn’t take into account mapping, GPS, user interfaces and everything else that goes into a marine electronic these days.

With so many technological advancements to the sport of bass fishing, an arms race has begun where a handful of prominent companies spend countless man hours and funds on research and development to come out with the next big thing, as well as keep up with the products and advancements of their competition.

There now seems to be a trend happening with a lot of the top-tier anglers in the professional bass fishing world, where they use a little something from several different companies to create a dream set up when it comes to electronics. Essentially, they’re creating a command central at the console of their boat and another on the front deck.

Elite Series pro John Crews is one such angler who has abandoned the idea of running one company’s units exclusively and moved to a conglomerate of several.

“Technology is evolving so quickly that it’s a matter of time before they all get good at everything,” said Crews. “But in the race for the best technology, certain brands spend more time and research on certain things and they get better at it.”

Crews fishes the Bassmaster Elite Series, competing nearly a dozen times a year for a top prize of $100,000 or more. Having the absolute best equipment available is essential in his mind and it helps him rise above the competition. His way of thinking clearly paid off in his recent win on the St. Johns River, where he used his unique electronics setup to catch fish both shallow and deep and secure his second Elite Series victory.

“Electronics are all still evolving for sure,” said Crews. “That’s why to me, having three different options, I have an opportunity, in my opinion, to use the best of each.”

Crews’ set up includes a Humminbird and Lowrance unit at the console, as well as a Humminbird, Lowrance and Garmin unit on the front deck of the boat. Each unit has a specific task which plays into Crews’ overall electronic strategy.

Let’s start with the console. 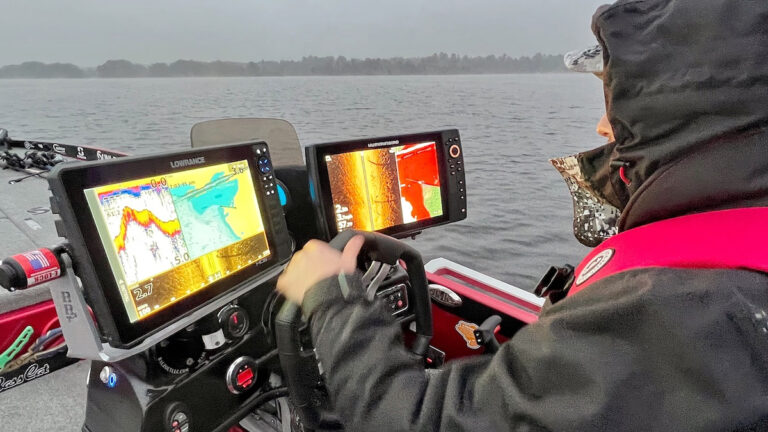 At the console of Crews’ boat, you’ll find a Lowrance HDS-12 and a Humminbird HELIX 12.

“LakeMaster can be more detailed wherever they have mapping of it,” Crews said.

LakeMaster is Humminbird’s proprietary mapping software, which has very detailed maps of many fisheries. On lakes where LakeMaster doesn’t have a map, however, other mapping software still proves quite invaluable.

Having the Lowrance at the console as well, Crews is able to quickly compare maps from multiple sources and find the best topographic lines possible on the go.

“I still use Navionics on my Lowrance,” said Crews. “Navionics is very good. What most people don’t know is that a lot of Navionics mapping is done through user input. Users upload sonar logs to Navionics and they update it periodically based on user input. I think that’s both cool and super helpful.”

In addition to mapping, Crews uses the Humminbird to scan for cover, bait and bass alongside the boat while idling.

“Humminbird was the first with the Side Imaging and they’re still really good at it,” Crews said.

Humminbird’s MEGA Side Imaging, in Crews’ opinion, is an excellent option. That being said, he stresses that other products are really good as well.

“Lowrance is really good,” Crews said. “And with Garmin’s new transducer that recently came out, their stuff looks awesome, too.”

So if Crews is using Humminbird’s mapping and Side Imaging at the console, what’s the purpose for having a Lowrance there as well?

“Lowrance’s user interface is solid and it has great mapping and waypoint management.”

Crews prefers to mark, store and manage his waypoints using his Lowrance unit. He uses the Humminbird with Side Imaging to scan the bottom but when he sees something he’s interested in marking, he’ll actually mark the waypoint on his Lowrance unit. To be able to mark things off to the side of the boat like this, Crews is simultaneously running Lowrance’s Side Scan technology on his HDS-12. 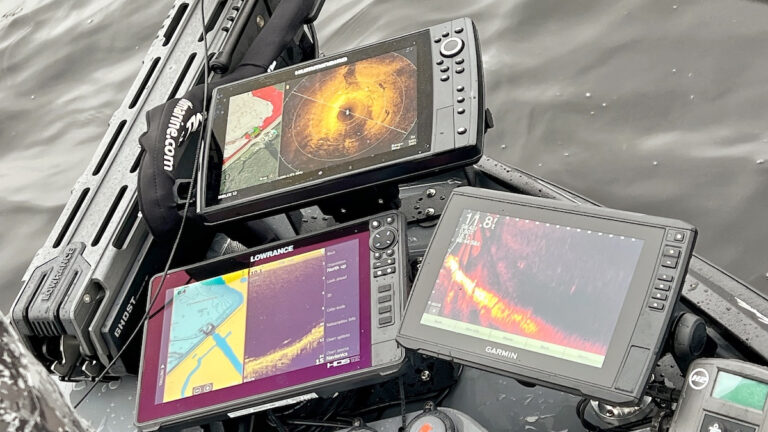 Moving to the front deck of the boat, you’ll see that Crews actually runs three units here now: a Humminbird HELIX 10, a Lowrance HDS-12 and a Garmin ECHOMAP Ultra 102sv.

Crews runs a Garmin on the front of his boat primarily for their forward-facing sonar called LiveScope.

“They were the original and they have more options to really be able to dial up your picture,” Crews said. “Lowrance caught up, but they came out with a slightly different product. There are not as many adjustments to make on the Lowrance ActiveTarget and it’s a little narrower cone angle, but it’s a very good picture and you can see what you want to see. It’s almost like down imagining but in forward. It’s a very good product, but it’s a slightly different product from Garmin’s LiveScope.”

LiveScope also alleviates many of the issues that might otherwise arise from Crews choosing to graph with the Humminbird unit and mark waypoints with the Lowrance. If the waypoints aren’t in exactly the right place, it’s not a really big deal anymore.

With LiveScope, you don’t really need waypoints that are as accurate because you’re not trying to triangulate to find a piece of cover anymore based on the waypoint on a map. Now, as long as the waypoint can help you get the boat close to the cover, you can then simply start panning around with forward facing sonar and locate the piece of cover quickly, without relying on the GPS waypoint to try to make an accurate cast like you would have in the past.

“I also have Humminbird 360 Imaging and LakeMaster on the bow front to be able to see the layout of the area I’m fishing,” Crews said.

Humminbird offers a product called 360 Imaging that gives the angler a broad (360-degree) view of everything that’s around the boat.

“I may be trying to fish a laydown on the bank and not even know there’s a big grass patch off to my left,” Crews said.

Given this scenario, Crews would have no reason to turn his trolling motor to the left, so the chances of him accidentally locating the grass clump with his forward-facing sonar are slim. But with Humminbird 360 Imaging running, things are different.

“I look down and checkout 360 Imaging and go, ‘Man, that looks like grass.’”, Crews explained. “Then I’ll turn LiveScope over there and go, ‘Oh, it is grass. Look at that!’”

Crews uses his Humminbird 360 Imaging and Garmin LiveScope in tandem, kind of like you would a ceiling fan light and a flashlight if you were looking for something in your room. The ceiling fan light would cause the thing in the corner of the room to catch your eye, but then you’d take the flashlight and point it directly at it to get a better look at what’s over there. 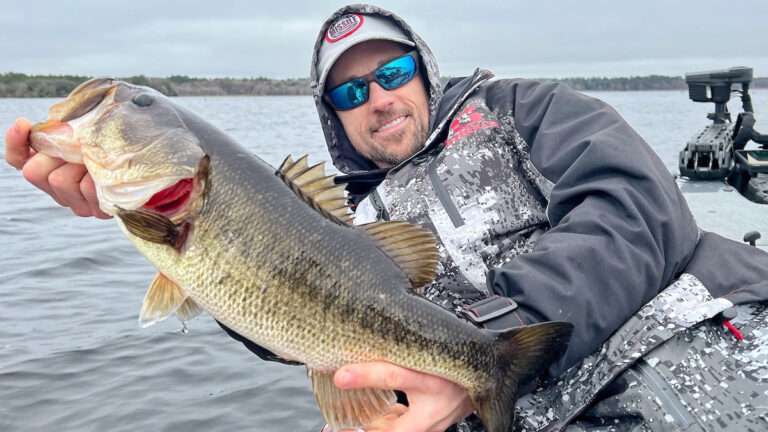 For many of us, the idea of a “perfect set up” like this is a little bit out of reach financially at this point in time. It is interesting, however, to hear the insights of a professional fisherman break down exactly why he prefers one company’s technology to another. In time, the technology will become more readily available and comparable from one company to another and competition should, in theory, drive the price down a bit.

If you are at a place where you can afford to rig your boat anyway you want, you have lots of options out there these days. Hopefully this insight from Crews will help you understand more about each product.

But remember, the technology is ever evolving. Just as soon as this piece is published, additional research will likely be necessary to ensure one of these front runners haven’t introduced a new piece of hardware or some software update that has elevated their game to a whole new level.

The arms race is still going strong. What will they think of next?