I learned a lot about rigging live earthworms for bigger panfish and even bonus bass on a volunteer fishing day recently.

It wasn’t the biggest bass I’d ever coaxed, but it was, by far the most meaningful. It was Finale Day at Idlewild Baptist Church’s Fishing Faith & Fun program, and I was coaching Esther, from our Special Needs Ministry. She had done well with nightcrawler worm chunks under a bobber for bluegill, but when I spotted a much larger largemouth bass lurking right off the first drop, I tossed out a whole worm and watched him rush forward to inhale it.

I gave my student a confident nod and said, “Watch this.”

That was 30 seconds before my teary eyes saw Esther reel in the day’s biggest fish — and lockup the overall tournament trophy. Our simple, yet strategic earthworm application bespeaks the diverse array of rigging options that’ll maximize your opportunities when fishing for bluegills. 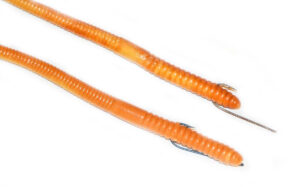 All I did was head hook a whole worm and help Esther present the bait with steady cadence of slight rod dips during a moderate retrieve. This utilized the worm’s naturally undulating form to tease the bass with a prominent profile and lots of movement.

You don’t want to let this rig sit for even a second or the panfish will rip off your bait. But a bass will inhale the whole rig, so just let him come tight and start reeling.

If you can manage to Texas-rig a live worm, that’s preferable, as it forms a more secure rig and if a bluegill gets a swipe at it, you’re less likely to lose your bait. But if the worm’s less than cooperative, just nose hook it through the big end about a quarter inch from the tip. With either technique, controlling your worm with a firm, but not crushing, grip is essential for effective placement.

For these rigs, I keep worm containers in a small cooler with about an inch of ice. You don’t want to freeze them, just slow their metabolism so they’re a firmer when hooking. Soon as a whole worm hits the water, it’ll perk up and do its dance.

This one’s simple math — double your bait and double your opportunity. Thread about 18 inches of line through one hook, form a loop with your hook inside and tie a simple overhand knot (passing hook and line through). This leaves your hook dangling about an inch off the main line. Repeat the process to make a second dropper about 6 inches below the first and then add a sinker (dropshot style is fine) at the end.

Tip each hook with worm chunks and drop into open water. Consider you’ll have twice the snagging risk and a less controllable rig, so keep this one away from heavy vegetation, wood, etc.

When fishing for the table, this rig fills your limit quickly. And if you’re hosting kids who are more impressed with numbers than size, this rig will bring the smiles.

You might also call it defensive fishing. Once you catch a bream, it lessens the chance of that particular fish biting again. So, if you’re weeding through little ones, the double dropper rig will sting all those little ones faster and hopefully clear the way for bigger opportunities.

I often try different color hooks (one gold, one bronze) to see if the fish have any preference. 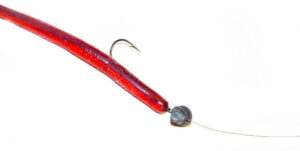 Thread a worm onto a long shank hook and then crimp a split shot right above the knot for a head-down, nearly vertical presentation that you can hop, shake or dead stick. Taking advantage of the worm’s natural motion, this can be a killer tactic for bigger bluegill and smaller bass that that feel a lot bigger on panfish rod and reels.

Now, this might seem like overkill for an earthworm, but I’d use this rig when I’ve spotted a couple of big ‘gills. Simply dropping a corked or free lined worm into the general area becomes a lesson in futility as the hyper-aggressive peewees swarm anything edible.

Bass and bigger bream will push their way up to the dinner table, but it only takes a couple of seconds for ravenous little mouths to shred a worm and mar the presentation. With this modified shaky head, I can target a dock piling, a riprap point, the far edge of a drain pipe or wherever the high-value targets are holding.

I like this one over mucky bottom where a bait can get lost, even under a float. A dropshot rig is also easier to cast/pitch than a float rig and you can hold your bait right where the fish are. Pieces work great for bedding bluegill on a drop shot rig, but whole worms can be more effective for bigger gills in deeper water, around cover and ones you spot in likely areas with your eyes.