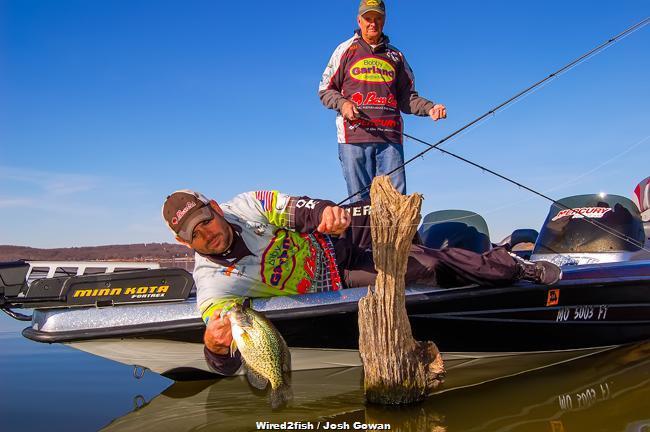 One of the first crappie fishing techniques most professional crappie anglers learned was vertical jigging, and the jolt of that first “thump” is what got most hooked on fishing. And while the crappie fishing on a lot of Midwestern and southern lakes can be tough in warmer water, vertical jigging is still a very productive way way to catch fish all year.

Many lakes across the country like Truman Lake in west-central Missouri offer phenomenal jig fishing all year long. The professional crappie fishing father-and-son team of Kevin Rogers and Charlie Rogers call Truman Lake home, and there is no jig fisherman in the country more respected and well-known than the younger of the father and son team, Kevin.

Basics of the technique

The idea is simple. Ease up to some sort of structure that holds crappie and using a long, 9- to 12-foot pole, lower a bait straight down in front of the fish, wait for the bite, set the hook and pull the fish into the boat. Sounds simple, but as is the case with most techniques, there’s a bit more to it.

Kevin Rogers fishes lakes across the Midwest, and prefers water with a lot of natural cover.  But there are several things that put the odds in his favor when vertical jigging that include the following:

The first thing Kevin looks for when heading to a lake is the upper end where the runoff is more prevalent and the water is more stained. The flats on the opposite side of the main channel always seem to hold more shad, and the water condition is better than farther down.

While in parts of the lake with clearer water the crappie will hold as deep as possible, the stained water on the upper end doesn’t let the sunlight penetrate as much, so the shallower water doesn’t bother the fish. Kevin avoids clear water at all costs. 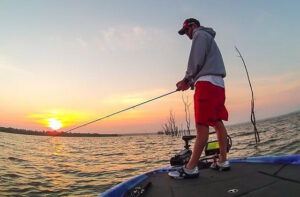 Find the pattern visually. Kevin sticks to visible structure when at all possible. It’s just a matter of finding a pattern. Specifically in the Midwest where lakes have various types of natural wood structure on the same lake, not knowing the different species of trees is what hurts most weekend anglers.

“One day the crappie will be on sycamore trees, and the next day cedar,” Kevin Rogers said. “During early summer they load up on hedge trees (Osage Orange or Bodark trees). Then later in the summer the fish will follow the shad to oak or sycamore stumps.”

Find crappie through trial and error. A big part of figuring out the pattern and being successful is just trial and error. Sometimes fish are only holding on small trees, sometimes it’s “double trees” where two or more trees are close together or it is some other small detail like that. Paying attention and figuring it out is the difference between wasting a lot of time fishing unproductive spots or loading the livewell.

Make the invisible visible. This style of fishing doesn’t necessitate a lot of electronics. Outside of checking your depth or marking a spot on the GPS, it’s not essential while fishing visible structure. If you’re on a clear, deep water lake where brush piles are the predominant structure, electronics become a bigger part of the equation. However, even when fishing these deep piles, after locating the structure the best way to effectively fish them is to throw a marker buoy.

Leave the current. Kevin avoids current as much as possible. Crappie seem to shut off in current, and are only caught behind structural breaks if anywhere at all.

Kevin Rogers gear selection might sound more like a bass fishing approach, but his results are hard to refute. His tackle includes the following:

Here is his reasoning on his tackle choices:

“It’s white, and my dad and fishing partner is 72 years old and can see the line. The strength and sensitivity of the line, though, is what I can’t live without,” Kevin said.

A graphite rod with the right mix of sensitivity and backbone makes this type of fishing more productive. Extremely shallow water necessitates a longer rod, and as you move deeper, you can go to a shorter rod. It’s just a matter of being far enough away from the noise of the boat and trolling motor to not spook the fish.

Kevin fishes a 10-foot Pro Angler rod with a small, cheap panfish reel. He keeps one hand on the rod, and the other is holding the line, essentially making him the reel.

While most jig fishermen consider an 1/8-ounce jighead to be big, Kevin uses a 3/16- to 1/4-ounce Bobby Garland MoGlo head in a bright color that is opposite the color of the top of his bait. His go-to color is called “lights out”, which is a black and solid-chartreuse.

“Contrasting the color of the jighead and the jig creates more hues for the fish to trigger on, and we’re looking for a reaction strike to a big, aggressive bait.”

Kevin employs the MinnKota Fortrex trolling motor. An electric drive motor does not keep up with his style of fishing, and the precision he gets with a cable drive is essential for fishing standing timber 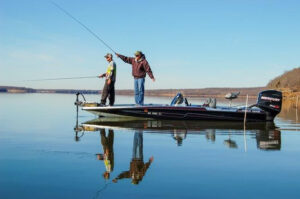 “We don’t go out and sit on a tree and hope there’s a fish there that will eventually bite,” Rogers said. “We go as fast as possible, with the idea that the more trees we fish, the more active fish we’ll catch.”

Kevin will fly into a spot and pitch to one side of the tree while his dad pitches to the other, both dropping their heavy jigs directly to the bottom. Kevin picks up few inches and holds while Charlie slowly pulls his bait up the center of the tree. As soon as Charlie’s bait is at the top of the water without a bite, they fire up the outboard and head to the next spot. If Charlie’s method of slowly raising his jig produces a bite at a certain depth, that’s how deep Kevin will drop his jig at the next stop. They may hit the same 7 or 8 spots through the course of the day, knowing the fish will bite eventually. 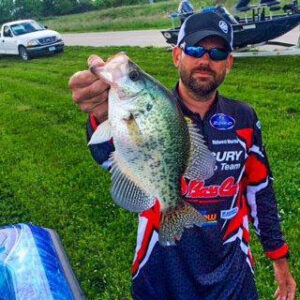 Kevin Rogers, K-rog, KRG-3, call him what you want, but you won’t call this slab-snatching hillbilly a slouch at vertical jigging. With 33 professional wins and a ton of television and magazine features, Kevin is widely regarded as one of the best vertical jig fisherman in the country, and his mastery of the summertime bite is a big part of the reason.

His methodology is closer to a jig-flipping bass fisherman than a patient, methodical crappie jig fisherman, and his run-and-gun style has redefined one of the oldest of fishing tactics. Just like crappie fishermen that pull big crankbaits in the southern reservoirs, the Roger’s are triggering reaction bites.

“While watching KVD, he runs and guns fluently with every movement timely,” Kevin Rogers said. “That’s what we’re trying to emulate when crappie fishing, getting as many pitches and creating as many opportunities as we can in the course of a day.”

The Rogers never use a net when vertical jigging, which also perplexes most anglers.

“We don’t use a net, never have when jigging. We just boat-flip them on 15-pound braid. One time we won a one-rod tournament in Texas with 15.85 pounds for 7 crappie and never used a net once with a 2 1/4-pound average fish.”