The transition from summer to fall may be the toughest time of year to catch crappie. Anglers have to be extremely mobile and tactically adaptable to any situation. Crappie become nomadic and are unpredictable from day to day during this period, but with the right knowledge and more importantly the right outlook, you can still fill the cooler.

The key to catching crappie during the summer-fall transition is learning to deal with the dissipation of the thermocline on your body of water, and few anglers are better at this than Kyle Schoenherr.

Schoenherr owns and operates All Seasons Guide Service in Southern Illinois, fishing Kinkaid Lake, Rend Lake, and Lake of Egypt, and stays booked throughout the year because of his ability to consistently put clients on fish. Schoenherr is also one of the most dangerous professional anglers in the country, ranking in the Top 3 in the nation at the BassProShop’s CrappieMaster’s National Championships in 2010, 2011, and 2012 and winning the Alabama State Championship in 2012.

Schoenherr starts his process by determining the water quality, water clarity and stage of the lake in regards to the thermocline and turnover.

“As soon as the thermocline disseminates and the water starts to cool, the dead microorganisms will begin floating to the top, and crappie will move to deep water,” Schoenherr said. Finding crappie in 30-40 feet of water is common during this period, and he employs a drop shot armed with a live minnow to reach them.

“Finding crappie really deep used to be trial and error,”Schoenherr said. “One reason I worked the drop shot a lot was because it got the bait down fast and it allowed me to search for cover and fish while moving quickly. With the electronics we have now, I can use the down and side imaging and pinpoint the structure, cover, baitfish and crappie much easier, but the drop shot is still the most effective method of catching those fish.”

On stained water lakes it’s just a matter of getting to those flats on the top end of the lake and looking for cover that crappie relate to like stumps or brush that reach into the top of the water column.

Remember the spawn – On shallow water basin lakes that don’t fluctuate much in water level like Reelfoot Lake in West Tennessee, crappie won’t migrate very far throughout the year. As the water cools they will move back close to spawning areas, but generally remain high in the water column. Lakes with fluctuating summer and winter pools do not share this characteristic.

“I’ll still be on the upper end of the lake, but I’ll be looking for bays where the fresh water pouring in isn’t affecting the area as much.”- Kyle Schoenherr

Cover within cover – “When I’m on a flat and fishing a 200- to 300-foot square and catching fish, I’ll thoroughly scan the area and look for cover within cover,” said Schoenherr. “When you’re fishing a stumpy area and only certain, specific spots produce fish, it’s usually because there is some secondary cover like a log laying adjacent to the stump or manmade cover next to it. For example, we fish a lot of stake beds strategically placed next to stumps.” Flats up river – Flats are always good areas to look for crappie, and an upriver flat just off the main channel is prime structure to find baitfish looking for fresh food being washed in just out of the current. These baitfish bring crappie who are after the same conditions. The exception is after a heavy rain.

“I’ll still be on the upper end of the lake, but I’ll be looking for bays where the fresh water pouring in isn’t affecting the area as much.”

Deep ledges – On clear water lakes where there is enough oxygen to support them, deep ledges will hold crappie during the transition. Schoenherr looks for structural breaks, rocks, or manmade cover like brush piles at the appropriate depth.

Find the shade – On shallow lakes full of cover, shade can be a great place to find late summer crappie. Black crappie especially will suspend just below overhead cover like lily pads and the bell of a cypress tree.

The summer-fall transition is dependent on weather and doesn’t happen overnight, and determining how your lake handles the transition and which tactic to employ is key.

Drop shot Fishing the depths of a clear water lake can be daunting, but the drop shot is the best way to get your bait down deep in front of feeding crappie. Schoenherr’s drop-shot rig consists of a 1/2-ounce bank sinker with a loop knot leader a few feet above with No. 2 Tru-Turn hook, baited with a live, medium shiner. He uses a 12-foot B’n’M BGJP and a Pflueger President spinning reel armed with 8- to 15-pound mono depending on the thickness of the cover.

Vertical jigging Schoenherr prefers a 1/16 or 1/8-ounce Pro Series Roadrunner jighead with a 2-inch Glow Midsouth tube jig in black and chartreuse, lime and chartreuse, or orange and chartreuse. In light cover he uses a 12-foot B’n’M Ultralight with the Buck’s Ultralight Crappie Reel spooled with 15/4 braid, and will move back to the BGJP in heavier cover.

Spider-rigging This tactic is most effectively employed during the transition when underwater stumps reach just beneath the water’s surface on a flat. Schoenherr uses 16-foot B’n’M BGJP’s to stay far away  from the boat when targeting these shallow crappie. He uses spinning reels with 10- to 17-pound mono depending on cover, and will push jigs, jigs tipped with minnows and just minnows depending on the bite.

The first few cool nights after a long, hot summer sparks a change in fish and fishermen alike, and while our thoughts are drawn to memories of loading the boat with eager crappie using our favorite fall tactics, most lakes are not ready yet. However, this doesn’t mean the crappie aren’t biting, and with a little know-how and a change of strategy you can still enjoy success on the water during the summer-fall transition. 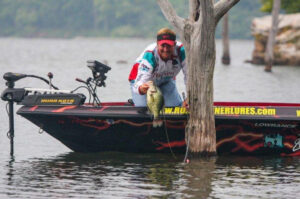