One of the more enjoyable tasks I’ve found in recent years around fishing has been shooting docks for crappie. I got a pretty advanced schooling from a couple of crappie professionals, including Mr. Crappie himself, Wally Marshall, and I took it back to the house and got busy figuring it out.

So since I’ve had so much fun doing it the last couple of years, I thought I’d let the cat out of the bag so to speak and share the wealth on this great and fun technique for catching crappie with the two pros that taught me. But my greatest advice is to spend the time on your own “figuring it out.” I can help you get started, but you’ll get much further on your own.

So here are 5 things one needs to know and do to catch crappie by shooting a tiny jig under the shady canopies where they lurk:

Wally Marshall, aka Mr. Crappie, really needs no introduction. If you’ve bought crappie fishing tackle, chances are Wally helped design it or hand an influence on it. His fingerprint is all over the sport of crappie fishing. He’s designed, rods, reels, line, tools, lures, jigheads, plastics and much more and his Mr. Crappie brand is seen just about anywhere crappie tackle is sold.

But the most impressive thing to me about Wally is his genuine passion for catching crappie, especially those that hide under docks.

“I love it man,” Marshall said. “There is nothing like making that incredible shot, clicking that bail over and feeling that thump.”

That “thump” is what drives most of us in fishing. We feel it in our sleep and the longing for that feeling keeps us coming back for more. 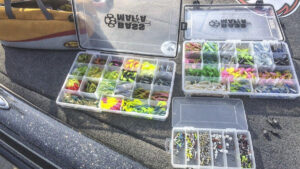 The gear most good dock shooters recommend probably varies from angler to angler, but for the most part, you’re talking about light-power rods from 5 1/2 to 7 feet in length that will load well, light 4-6 pound line and a small 1/32 to 1/16 ounce jighead with a small, usually “skippable” plastic attached.

A few key takeaways on the gear would be use the lightest jig you can. Crappie are often suspended under the docks and often just a foot or two down. So you can maximize the lure’s time in the strike zone, by skipping a really light lure and letting it slowly sink through the fish or reel through the fish. Also a lighter jighead will skip much easier than a heavier one if the opening under the dock is small.

Another key note on this technique and crappie fishing in general is to be able to see your line. About half the crappie I’ve caught under docks I saw move my line, not felt on my hand. Marshall is a big proponent of his yellow hi-vis Mr. Crappie line.

“You are shooting the jig into really dark places,” Marshall said. “Those fish don’t care about the line. I’ve had guys tell me the crappie can see the line, and it spooks them. I just remind them that there are 200 crappie in my freezer that apparently didn’t care.”

Another note is the shape of the plastic. A spear or shad shaped plastic shoots much better than a bushy tube or curl tail. 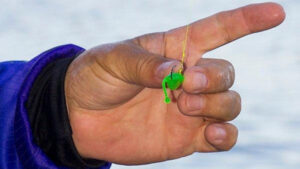 Now to the crux of the technique and where the men get separated from the boys — shooting the jig. The four parts to the shot are as follows:

First and foremost, concentrate on where and how you grasp a jighead. Alabama crappie guide and Bobby Garland pro Lee Pitts suggested grabbing the head or the bend of the hook by pinching it between your thumb and forefinger like you were about to shoot a really light bow and arrow.

“The worst thing is people who get excited, grab the jighead in a place where the hook is inline with their hand and shoot the hook into their own hand,” Pitts said. “You can pinch the jighead at the bend in the hook so the point is facing away from you. But even better you can pinch the head with the hook point facing away from you. It really has no effect on the cast at all and you won’t ever get hooked.”

Once you have the grip down. Let enough line out so that the jighead and plastic is about even from the tip of the rod down to the last guide at the bottom of the reel. In other words you want 3-4 feet of line out from the end of the rod.

You are going to then pinch the lure in your hand and point the rod at the opening under the dock where you want to shoot the jig. Then pull back on the lure to bend the rod back and load the rod for the shot.

Watch Pitts in this tutorial on shooting docks in this video

The release is equally important. You have to master the timing of releasing your hands on the lure and starting it forward and then releasing your finger that is holding the line where you opened the bail on the spinning reel. If you release at the same time, there will be no momentum to carry the lure forward. If you wait too long to let go of the line with your finger, you will kill the forward momentum of the shot. So it takes a lot of practice.

I skip a lot of jigs under docks because the openings are often very small. Marshall likes to shoot his jigs as far back as he can without ever touching the water. So it’s a matter of the dock and your skill level on how far you can get back to those really pressured crappie. 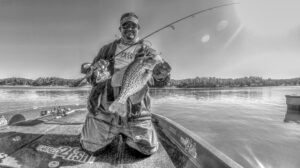 NOT ALL DOCKS ARE GOOD

The hardest thing for me to learn in this technique is that no matter how good a dock looks, it doesn’t make it a good dock. And the only way to find which docks are good docks and not good docks is to fish a lot of them. I do find that a good depth range under a dock is generally better. so if a dock is say 2-3 feet back by the walkway and 10-12 in front of the dock, it’s usually a good dock.

But I’ve seen docks that looked like nothing produce tons of fish. A deep docks that looked awesome produce no fish. So you still have to invest the time to figure out which docks in which creeks on your lake are consistently productive.

THE RETRIEVE AND NO RETRIEVE

Another experiment comes with retrieve styles. Again some retrieves will work better than others on certain days. And sometimes the best retrieve is no retrieve.

“Usually I will shoot that jig up in there and let it sink a while,” Marshall said. “Then if nothing hits on the fall I’ll start a slow retrieve back to the boat. Every now and again I’ll throw the slightest twitch or pause. I call that that Wally shake. If those crappie are under there, they can’t stand it.” 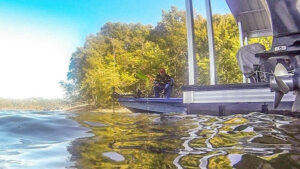 Respect other people’s docks, and you’ll save a lot of tackle too. When you’re first learning the technique. Get out in your boat, kayak or along the bank and practice getting low, loading the rod and skipping the lure back or shooting really low to the water a long distance before you start taking aim at dock openings.

Then as you get better, you will find that certain angles of entry and retrieve yield the most crappie. I liken it to fishing a sweet spot on a ledge. There is one little ole place those crappie want to be under that dock, and you need to get the jighead and plastic in there and then bring it right by them at the right angle to catch them. 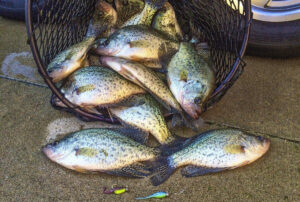 FAVORITES FOR THE TECHNIQUE

Wally Marshall has designed a lot of awesome baits for this technique. His favorites are the Strike King Mr. Crappie Shad Pole, Slabalicious and Slab Slanger for shooting docks. He will rig these on 1/16-ounce Strike King jigheads.

Lee Pitts likes the Bobby Garland Baby Shad, Slab Dockt’R or Slab Slay’R for shooting docks and he will even go down to a really small 1/64 or 1/32 ounce head and an Itty Bit Swim”R in clear water or pressured fish.

Both use Lew’s Mr. Crappie Signature Series rods in either 5 1/2 foot or 7-foot sizes with Lew’s Mr. Crappie reels. I am also fond of both the 5 1/2-foot rods but I really fell in love with Wally’s 7-foot Signature Series rod from Lew’s for shooting docks. I was even able to teach my son how to do it in an afternoon with this rod and he did really well catching several crappie that day.

I like it best in spring when the fish are moving up to spawn or just after the spawn. But you can catch them at other times as well. Deep water lakes and lots of shade offer a great place to look for crappie in warmer water too. 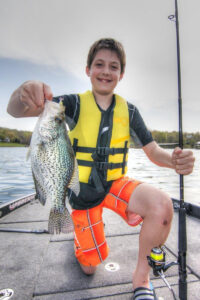