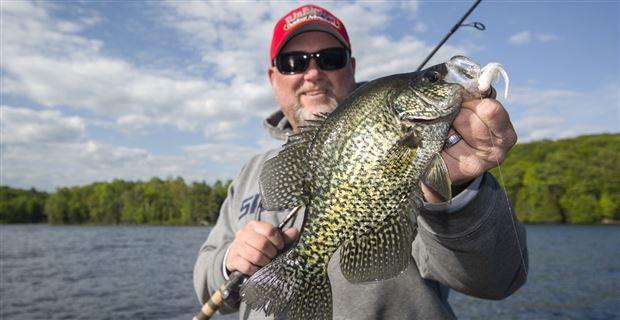 On northern lakes, deep vegetation is a great place to cast jigs for black crappie. From summer into fall, crappie relate to healthy aquatic plants. They use deep weed beds for cover and as a place to hunt baitfish and other food. That’s why you should fish deep grass for crappie.

Here are 5 parts to Jackson’s straightforward approach for catching crappie: 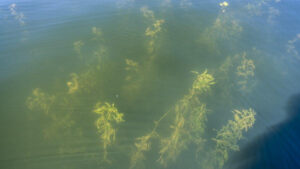 Clear, fertile natural lakes typically contain a lot of vegetation, but not all plants hold crappie. Using Navionics’ contour charts to pinpoint bays, flats, points and drop-offs between 8 to 14 feet, Jackson focuses on the following areas: 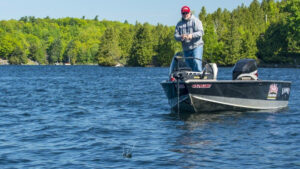 Once Jackson locates prime water, he dissects it using a 2-inch tube on jighead. Here are 7 elements of his approach: 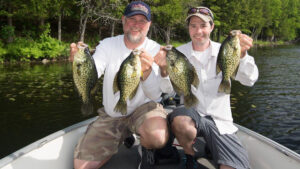 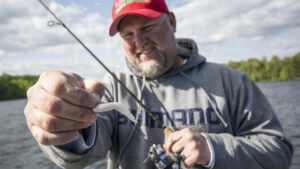 Crappie are a schooling fish. Catching one means there are more around, so boat position is important. When crappie are relating to isolated clumps of cabbage within a milfoil bed, Jackson uses a marker buoy to keep his Lund in the zone.

“Don’t throw the marker buoy on top of the fish,” Jackson said. “Set it off to the side of where crappie are holding, so you don’t spook them. Then use the buoy as a reference point.”

A GPS is just as valuable. This rang true last summer when Jackson and I fished together. The crappie were cruising over a deep grass flat and along its outside edge. We’d catch a few fish, then the school would scatter. To intercept them, we’d cycle back and follow the GPS trail and waypoints of previous catches. This worked many times through the afternoon. 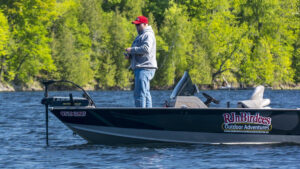 Looking for suspending crappie cruising above plants will catch anglers more fish. Seeing papermouths can be tricky, even with polarized glasses. Jackson recommends looking for the chalky tips of a big slab’s bottom fins, which standout against the dark vegetation below.

“Always be on the lookout for a crappie’s ‘white slippers,’” Jackson said. “Then pitch the tube a few feet in front of them, let it fall and watch for the bite.”

The next time you’re fishing crappie, be sure to spend some time casting deep vegetation. Focus on healthy greenery in the vicinity of spring spawning habitat, and give a 2-inch tube a try. This straightforward approach helps Jackson and clients land loads of slabs each season. 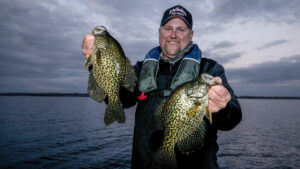 Tip – A 2-inch tube is a meaty meal for a crappie. Use a quality hook featuring a long shank and sizable gap to stick light biting slabs.