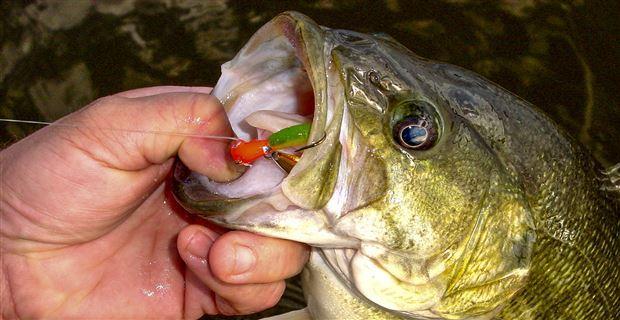 When a passing cold front has the bass in a cantankerous mood, most anglers know that downsizing can be an effective strategy. But are we downsizing enough? Fact is, whenever bass are nibbling on tiny baitfish or not feeding much after a front, panfish-sized lures can be good for bass fishing.

Case in point, on a tough Florida fall day, when a passing cold front had the bass scarce, my group turned to deep jigging crappie on channel turns in Rodman Reservoir. The freckled fish were digging the 1/32-ounce jigs with little curly tail grubs, but twice during that morning a light spinning outfit bent like a willow in a hurricane, as big bass sucked in the easy meal.

Elsewhere, Mr. Crappie, Wally Marshall will tell you often, he’s convinced himself he’s hooked the Mac Daddy slab while dock shooting one of his Strike King plastics, only to find an irate bass at the end of his high-vis line.

Incidental catches offer clear indications of a bass’ willingness to gobble minuscule meals and this evidence prompts strategic options when the bite gets tough. Here’s a handful of ideas from anglers who know the value of raiding the crappie tray for sulking bass.

“In cold water situations, when the bite gets really tough, I’ll let a Road Runner go down to the bottom and just slow roll it back,” he said. “That works on multiple species. I’ve caught 2 1/2- to 3-pound crappie this way and the biggest bass I’ve caught on it was 7 pounds.

“The key is to reel it as slowly as you can. Sometimes, when we’re trying to target a specific strike zone, you just go through there too fast. The fish aren’t moving that fast in these conditions, so you have to slow roll that bait keep it in front of them as long as you can.”

Typically fishing his Road Runners on 4- to 6-pound line, even a sluggish bass puts up a memorable engagement on the light tackle. Just ease back on the throttle.

“It’s a good fight on light tackle, but with those light wire hooks, you don’t want to horse it like you would with a big 4/0 flipping hook,” he said.

Between tournaments, Bassmaster Elite Series pro David Walker most commonly uses the Slim SwimZ for white bass and crappie, but when the black bass get finicky and turn up their noses at anything but the smallest baitfish, he’ll retask this offering with great success.

“Matching the hatch with that bait is what’s key,” Walker said. “What’s cool about the Slim Swimz is that it’s a tiny bait, but it still has action. I’ve never used any other soft plastics in that really small form that had any action unless you would reel it extremely quickly.

“This bait will swim on its way down, and if you hold it still, it’s very easy to give it movement.”

In clear water or bright conditions, when distance proves essential, Walker rigs his Slim SwimZ on a heavier Ned Rig jig head to deliver that enticing presentation to distant fish.

Stepping up in size, but still a regular in his crappie stable, Walker also likes the 4-inch Z-Man Finesse ShadZ for stubborn post-front bass. A subtle, straight-tail form, well-suited for dropshotting to inactive fish, the bait’s durable ElaZtech body holds up well to nose hooking, while delivering strategic buoyancy.

“Most baits want to sink down when you stop moving them, but when you stop a Finesse Shadz, it floats up,” Walker said. “That’s just another way of giving the fish a look that they’re not accustomed to seeing.

“Sometimes, less is more. Instead of working the bait in order to give it some action, the Finesse Shadz does that on its own. When you just hold the line tight, it’s moving upward for you. Sometimes, the subtle action of that bait is what triggers a strike.”

“I throw these on 6- to 8-pound Lew’s APT Fluorocarbon and a 7-foot medium-action Lew’s Custom Speed Stick and a 3000 size Team Lew’s Pro Speed Spin,” Upshaw said. “The bigger spool gives me increased casting distance, while the sinking bait allows me to cover multiple depths.”

A renowned crappie getter, the marabou will also tempt lazy bass with is pulsing skirt profile and bite-sized for. Only problem is that unlike the vertical jigging common to crappie pursuits, bass anglers often need more casting distance with this lighter bait.

Elite Series pro Seth Feider remedies this with recycled Senkos. Keeping his worn and torn baits in a plastic food storage container, he’ll bite off an inch-long piece and thread it onto the bait’s hook. Neatly tucked beneath the puffy marabou skirt, the worm adds weight and extends casting distance — all from a clandestine position.

When you’re trying to catch a big fish, sometimes, it’s easy to overlook the smaller baits, but when those fish get tough to catch, a small bait will get you some bites. A big fish will surprise you with what he’ll eat.