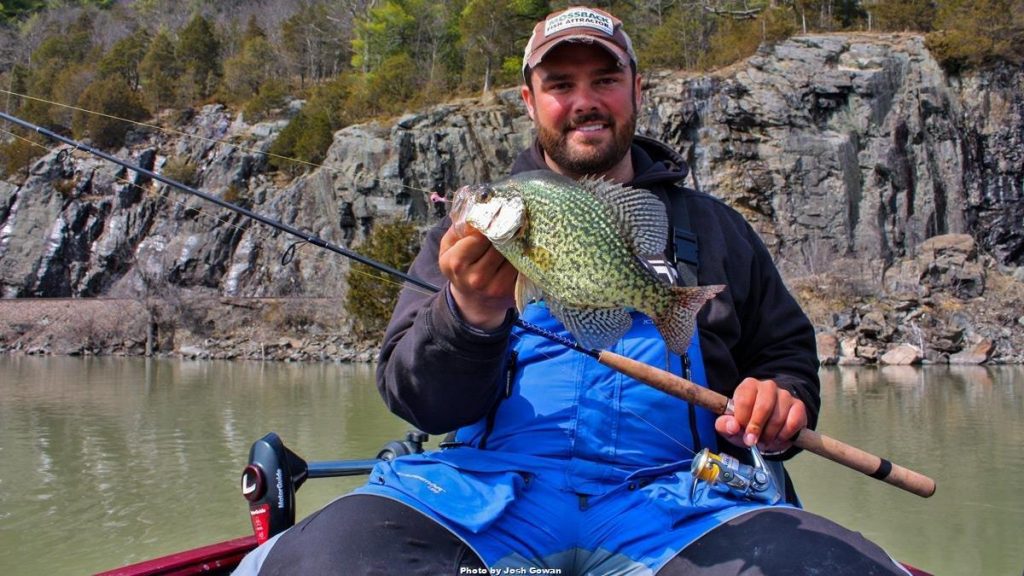 The crappie spawn attracts more anglers to the water than any other time of year. The opportunity to locate large numbers of aggressive crappie in close quarters, along with the hand-to-hand combat that ensues between shallow fish and ultra-light tackle, is probably what attracted most of us to crappie fishing.

Understanding how the spawn plays out and finding prominent areas will greatly increase your chances of catching big, springtime slabs. These tips will help you plan your attack before the spawn arrives.

To be successful fishing during the spawn, crappie fishermen need to understand the following: 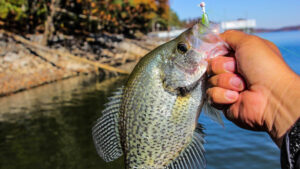 When the spawn begins

As water temperature and daylight hours increase, crappie began their migration to shallower waters to spawn. The magic number the water temperature needs to reach is heavily debated, but most agree between 56-59 degrees will find white crappie in the process of spawning.

On many lakes, black crappie will begin the final migration when the water temperature hits 50-52 degrees, and will be done by the time the white crappie arrive. The more days of consistently warm weather bringing the water temps up, the smoother the transition will be for the crappie, and the better the fishing will be for the anglers.

Male crappie fan the nests and essentially make the bed while the females stage out from the nest. Depending on the lake and progression of the spawn, females may be farther out and much deeper than the males, or within 6 feet and at the same depth, but both sexes will be feeding aggressively up to the last stages of the female moving in and dropping her eggs. Females are then in and out rather briefly, and once they’ve dropped all of their eggs are very difficult to pinpoint and catch.

Male crappie are emphatic guards of their up and coming fry, which is why the spawn bite is the best “thump” most anglers feel all year. However it’s important to remember that the males are not actively feeding after the females have left, they are merely trying to run off any predator of the tender eggs. While the initial bite is ferocious, male crappie are only trying to kill or wound baitfish that pose a threat, and will “chomp” once or twice and then spit the bait. They are genetically geared to feed heavily prior to the spawn to prepare for the fasting that accompanies it. A quick hook-set is key, otherwise your bait will be outside of the crappie’s mouth in a matter of seconds.

The role of the female crappie during the spawn is to do one thing and one thing only: lay her eggs. Catching females with eggs pouring out of them is rare, but if it does happen you are right in the heart of the spawn, and should find aggressive males nearby. What exactly causes a female to deem it time to drop her eggs is unclear on any given body of water, but what is clear is that it usually happens in mass in particular areas, meaning if you do luck up upon one, there are more nearby in similar surroundings. Most females caught while spawn fishing are prespawn and loaded with eggs. 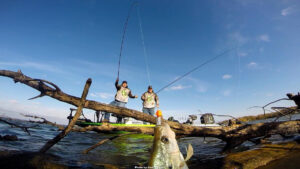 Cover, cover and more cover – Before delving too far into this, a bit of clarity with regards to terminology is in order. Most crappie anglers refer to a brushpile, a stump, a stakebed, a dock or even vegetation as structure, because after all, they are all by definition “structures”. However, in the wild world of technical writing, structure refers to bottom contours like ledges, ditches, and so on, and cover encompasses anything that provides concealment to a fish.

Crappie move shallow to spawn and do so on firm bottoms, which can range from rocks to logs, but is usually performed on the lake floor surrounded by cover, which is primarily for protection against predators and mother nature’s wrath. Any shallow cover over a hard bottom is an excellent place to look for spawning crappie. Hard objects give the crappie a place to hide and protect their nest. So cover is always where you should look.

Keep track of previous spawns – Crappie are creatures of habit, and will return to spawn in the same areas that yielded success in the past given similar water levels.. It’s also important to note that an unsuccessful spawn will often result in a change of habitat during the next year’s spawn. Water levels dropping quickly during the spawn can wreak havoc on eggs, and crappie will in turn find safer areas to make beds for the next year.

Water clarity’s affect – Water clarity, or more accurately light penetration, dictates the depth crappie find comfortable at all times during the year, and especially during the spawn. Muddy to heavily stained water keeps crappie shallow, and during the spawn they can be in as little as 1 foot of water. As the water clears, crappie move deeper, and in extremely clear water can spawn as deep as 20 feet. 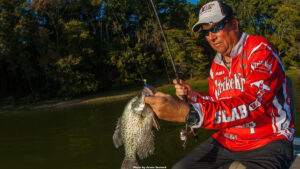 Get loud – Loud in crappie lures during the spawn refers to color not sound. Male crappie are generally the target when spawn fishing, and they are protecting, not feeding. They are however aggressive, and will attack anything that they deem a threat, so big, bright colors that are more visible will garner more attention and strikes. A little rattle, however, never hurts in dirty water.

Fast and slow – The predictability of crappie during the spawn is what draws so many anglers to the water. Successful spawning grounds are not secrets among fish, and when you find one angry male, there are likely many more in close proximity. Fishing fast and covering a lot of ground is key when searching for spawning fish, but once you find them, slow down and pick apart the area.

When to break out the minnows – There are times when male crappie will only “nip” at predators and baits. This often results in short strikes and missed fish, and downsizing your bait and/or tipping it with a live minnow will make the most reluctant of crappie take a bigger bite and hold on a bit longer, allowing for a proper hookset. 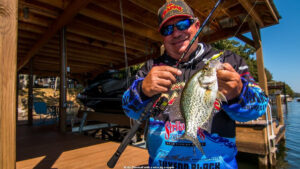 Which tactic to employ

Vertical jigging – When dealing with heavy cover such as brush, standing timber, and thick vegetation, vertical jigging is the best method to effectively fish an area. A long, light jig pole allows anglers to reach into, above, or around cover and drop a bait right in the crappie’s home. Active males rarely require much action from a bait, and even color can be a non-issue as long as the crappie can see the bait. A moderately slow fall and bit of up and down jigging will usually do the trick if the fish are there.

Casting to the shallows – Lakes with gravel or riprap banks will often hold spawning fish extremely shallow and without much cover. Casting a jig to the bank and dragging it back, staying just off or bouncing the bottom will trigger strikes from these fish. Utilizing a float above the jig will allow you to maintain exact control of lure depth, but an eagle-eye and lightning fast reflexes, along with a stiff 6- or 7-foot rod is necessary to make quick, strong hook-sets on fish that have no intention of eating the bait.

Spider-rigging deep cover – Although most crappie move into less than 4-foot of water to spawn, there are still some that will stay out in 6 to 8-foot of water and spawn on submerged logs or manmade cover. Logs especially are difficult to one-pole fish without a mastery of your electronics. Pushing multiple poles across logs is the most effective tactic to employ on deeper spawning crappie, but this is not a time to get every pole in the boat out. Pushing 4 to 6 poles is more than adequate, as again you will likely get many hard bites but few second chances, so reducing the number of poles will improve your odds. 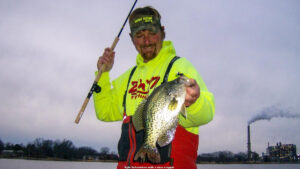 Standards and “rules of thumb” are all there for a reason, they are proven advice in most situations, but every body of water is different and has its own nuances.

Small water – Ponds and creeks are shallower and warm up faster, and are ideal places to slip a small boat in or walk the edges with a long rod and pick off spawning crappie before your local lake gets hot. Finding cover on the edge of the bank is usually easy enough to do, and to increase your chances in a small boat, hang a pole or two out to the side away from the bank while vertical jigging the cover on the bank side.

If fishing from the bank and unable to find crappie in the reachable cover, clip on a small float and pitch out past the cover, or bring a spinning rod and reel and cast out to the deeper water and pull in towards the bank. Chances are, even if the crappie are not committed to the shallow cover yet, they are not far away and feeding actively.

Deep south impoundments – Down in the Lone Star State, Wally Marshall or Mr. Crappie as he’s otherwise known, looks for consistent air temps at night to let him know the spawn is on.

“On my home lakes of Lavon and Ray Roberts, once we get a couple consecutive 60 degree nights, I know it’s time to get out the jig pole and go shallow,” said Marshall. “Crappie will start moving up in the tributaries and will look for logs and sticks and any cover around a clay bottom. It’s not uncommon for us to have spawning fish in less than 2-feet of water, and I’ll be jigging any visible structure, or pitching a Joker or Crappie Thunder in black and chartreuse, white and chartreuse, or hot pink under a slip bobber up in the creeks.”

Midwest power plant lakes -“At Lake of Egypt, a power plant lake in Southern Illinois, black crappie chase the warm water throughout the winter,” Schoenherr said. “As the days grow longer in mid to late February the black crappie will start migrating towards the weedlines, and when the water reaches 50 degrees they’ll move in. Between the power plant pushing hot water out, the wind moving it around, and the tumultuous air temperature swings, the spawn is scattered throughout the lake, but once you get consistent water temps in the upper 50’s the black crappie are done, and the whites are starting the same pattern.”

Northeast river systems – Dylan Smith of D&B Ice Adventures doesn’t put his poles away after ice-out, he just trades them in for longer ones.

“My home lake is Lake Champlain, a 120-mile river system that separates Vermont from New York, and the biggest factor that determines when the spawn will begin is snowfall,” Smith said. “After ice-out the snow begins to melt and runs down into the river, and it can be as late as May before the water temperature reaches 55 degrees, which is when I’m really keying in on spawning crappie.”

“When the osprey are diving in the shallows this time of year, it’s usually after spawning crappie,” said Smith. “I’m looking for beds in as deep as 12-feet of water with my side imaging to cast and retrieve through, or cover in as shallow as 1-foot of water to vertical jig, and am using anything from marabou jigs to Lake Fork Live Baby Shad plastics.”

Crappie fishing the spawn gives anglers the best chance at loading the boat with concentrated numbers of tenacious slabs from ultra shallow water. Paying attention to water conditions and recalling recent spawns, along with staying on the move to find actively spawning crappie can result in multiple successful trips catching America’s favorite panfish.