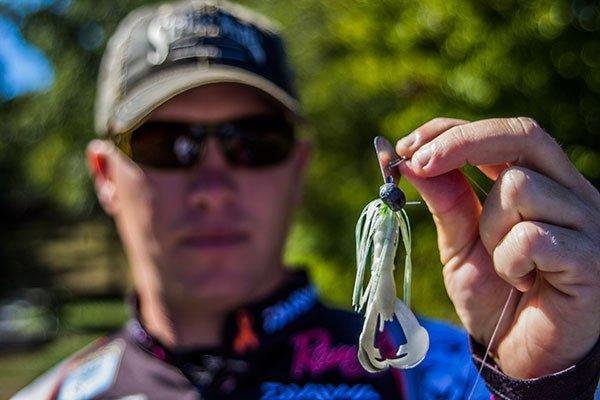 Pro Andy Montgomery is in his ultimate comfort zone with a bladed swim jig on the end of his line. According to him, there are 6 reasons you need to be throwing a bladed swim jig the next time you go bass fishing.

It catches bass all year

Many bass fishing lures and techniques are very season-specific. Just like the tools in a mechanic’s toolbox, there is a certain time and place to use most lures. Bladed swim jigs, however, can be a very versatile tool in your tackle box.

“Bladed swim jigs, such as the Strike King Tour Grade Rage Blade Swim Jig are very much a year-round bait for me,” Montgomery said. “You can imitate so many of a bass’ primary forage types with itâ€”it doesn’t paint you into a corner by only imitating a single food source.”

Although Montgomery has caught big bass on the Rage Blade throughout the entire year, there are three seasonal periods in which he does his most damage with it.

The large majority of bass lures are meant to imitate very explicit types of bass forage. Instead of limiting the number of bass to which your lure appeals, bladed swim jigs can attract bass focusing on various food sources.

Swim it through the thick stuff

Squarebill crankbaits are a popular choice among bass anglers when fishing shallow cover such as laydowns, stumps and dock posts. Instead of targeting these shallow bass with the same presentation day-in and day-out, Montgomery believes a change in profile can catch the fish others leave behind.

“You can fish the Rage Blade in areas where many squarebills can’t reach,” Montgomery said. “Strike King designed it with the lead head below the blade, so it very rarely gets snagged on heavy cover. No matter how good your squarebill is,

Profile differentiation can also pay big dividends when targeting shallow resident fish. In many fisheries, select bass will live their entire lives in shallow sloughs and backwater areas. They may seem easy to catch, but they can prove to be quite challenging. They’ve probably seen hundreds of crankbaits throughout the year, but there’s a very low possibility they’ve seen many bladed swim jigs swim by their noses.

Simple to use, even for novice anglers

As with most presentations, experimentation with a bladed swim jig’s cadence and retrieve speed is essential to maximizing your success. There’s good news, thoughâ€” it’s usually not rocket science.

Standard retrieve – “There isn’t one ‘set’ retrieve that’s going to work all day, every day,” Montgomery said. “Most often, however, I just make a long cast and reel it at a medium speed while incorporating a few rod twitches

“I change things throughout my retrieveâ€”you’ll catch plenty this way. Always pay attention to exactly what you were doing when you got your last bite because that’s the easiest way to develop a strong pattern.” 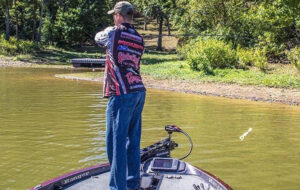 Many bass anglers loathe dirty water conditions. The bass can get super-tight to cover and are less apt to give chase to lures, making the bite tough at times. Bladed swim jigs, however, are at their best in low-visibility water.

“You’ll definitely catch fish on a bladed swim jig in clear water, but it really shines in stained water,” Montgomery said. “You don’t really want tomato soup-colored water, but anything less generally isn’t a problem. The Rage Blade is a really

Montgomery suggests setting the hook at a 45-degree angle. This angle helps pop the hook point into the hardest part of the bass’ mouth.

“It’s a loud bait with a lot of vibrationâ€”just like you’d use a Colorado blade on a spinnerbait in dirty water for added displacement. This is a technique that can definitely help you take advantage of conditions other anglers may hate.”

In addition to stained water, Montgomery also believes wind helps a bladed swim jig bite. Not only will wind stir up oxygen levels in the water, but it also allows him to get up close and personal.

“Wind is great for this technique because you can put the Rage Blade right on top of a fish without spooking it,” Montgomery said. “In calm water bass are much more wary but wind breaks up the surface and makes them less aware of your casts.”

Some anglers have dozens of color selections for the same lure, but that’s certainly not the case with Montgomery. Although he’s widely renowned as an aficionado of bladed swim jigs, he keeps his color selection insanely simple.

Similar to his color selection process, Montgomery suggests keeping your soft plastic trailer selection simple as well. More often than not, there are only three types of trailers he uses.

If you’re looking for a new way to catch big bass, consider using a bladed swim jig this year. Instead of using a more traditional presentation, go against the grain for some greatâ€”and excitingâ€”results.

What’s your favorite way to fish a bladed swim jig?