Color me ignorant on this one but I had no idea electric outboards were even a thing. Heck, I didn’t know that electric-only fishing was a thing, that is until recently. I had heard of the famed Dixon Lake in California where Dottie, the 23-pound largemouth bass that could have broken the world record, lived. Lake Dixon doesn’t allow you to bring your own boat, instead you have to rent a boat from them rigged with nothing more than a trolling motor. So essentially, that’s an electric-only boat. But that’s nowhere close to what “electric-only” fishing means anymore.

Apparently, electric-only fishing has been a big deal for a really long time and electric-only outboards aren’t new either, with our own Jason Sealock writing a piece in 2017 featuring one of the industry’s front runners in this technology, Pure Watercraft. I also recently learned that Mike Iaconelli, former Bassmaster Classic champion and arguably one of the most influential anglers in the history of the sport of bass fishing even got his start in electric-only fishing.

Ike’s early bass fishing rig was a polyurethane jon boat, outfitted with one trolling motor on the front and another on the back to fish the local lakes around his home in New Jersey that didn’t allow combustion engines. This regulation on certain fisheries, often small man-made lakes created for drinking water, lead to a niche fishing community that has thrived throughout little segments of the country for decades now in areas like Virginia, New Jersey, North Carolina and Georgia.

But recently, this subset of the sport of bass fishing has really taken off, in large part due to advancements in the electric outboard which has added a considerable improvement to the propulsion options from the basic trolling motors used in the past. 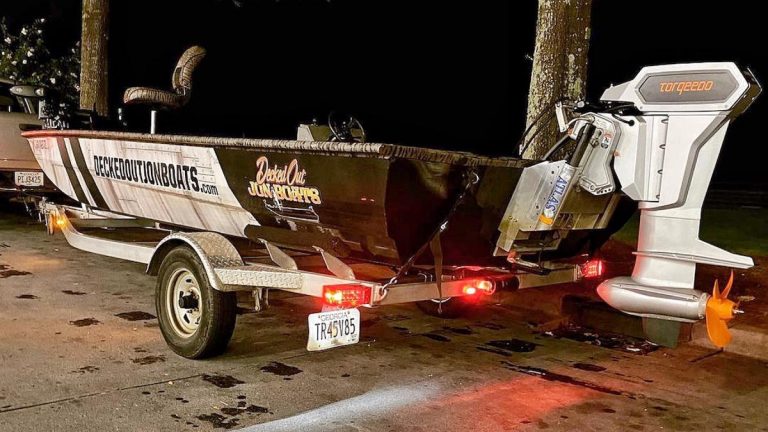 “I started fishing electric only tournaments in 1996,” said Brett Cummings, founder of the Facebook page Decked Out Jon Boats which has more that 45,000 members. “I can remember seeing my first electric outboard. A guy showed up with a Ray Electric Outboard on a Gheenoe. I had a 1448 jon boat at the time with two 107-pound thrust trolling motors on the back. People were talking about how they could probably ski behind my boat. That was the fastest you got with electric only. Then that guy showed up with that Ray and just walked off and left all of us.”

According to Ray Electric Outboard’s website, the company’s founder Morton Ray began designing the first electric outboard in his basement in 1973. In the nearly four decades since, electric outboard production has made its way into a bustling industry with several companies trying their hand at what many believe will at least be a large chunk of the future of propulsion in fishing. And with the simultaneous rise in the popularity of kayak fishing, it’s no surprise companies like Torqeedo have larger electric outboards reaching up to 80 horsepower, which is really quite impressive.

This motor is listed on Torqeedo’s site as the equivalent to a 20-horsepower combustion engine. “I just put that motor on my HD18DDP Xpress about the middle of the year so I haven’t had a lot of time to play with it. My boat will run about 10 miles per hour. But some guys up north running that motor are getting closer to 17 miles per hour.”

In the electric-only game, how an angler lays out a boat and distributes the weight of the batteries and gear greatly effects how the boat will perform. Cummings has a wooden deck in his jon boat, 3 lead batteries for his 112 Ultrex, a group-24 battery for all of his electronics and a small battery in the back to run the running lights, jackplate and aerators.

“In the offseason I’ll be playing with my setup to see if I can’t get a little more speed out of my rig,” he said. “The Torqeedo also comes with two of the 48-volt lithium batteries that weigh 80 pounds apiece.”

So far, Cummings hasn’t been able to run his motor all the way down during a day of competition or practice for that matter. In preparation for a recent tournament, Cummings and his partner Gary Murphy spent the majority of a day running around and graphing and only drained the batteries down to 20 percent.

Local clubs and pot tournaments are prevalent throughout the country wherever there is an electric-only fishing presence. But a few tournament trails now are starting to put up fairly substantial payouts.

Cummings and his tournament partner Gary Murphy who fish primarily in Georgia, won one of the bigger tournaments recently-the Electric Elite Championship on Hard Labor Reservoir, bringing home nearly $7,500 between their first-place prize, big fish winnings for the event as well as having capped off the season with the biggest fish for the year.

Cummings believes electric-only will be the next big segment in bass fishing to blow up.

“It’s just as affordable to get into as kayak fishing and the boats fish a lot better than a kayak in my opinion,” he said. Cummings also credited the increase in availability and affordability of lithium batteries.

The rise in population in areas without readily available drinking water is also contributing to the increase in the electric-only scene. Cummings’ partner Gary Murphy stated that there were roughly 15 to 20 electric-only lakes within a 50-mile radius of them in Georgia now and that number is increasing.

“There’s probably a new lake every 3 to 5 years,” said Murphy. “It takes several years to build them and that number is increasing heavily now with all of this construction.”

Lakes are having to be built to retain drinking water for these new communities that are being built in barren areas. These lakes are often open for recreational use, but combustion engines are prohibited. The majority of the electric-only lakes where Murphy and Cummings fish tournaments range from 200 to 1,200 acres, which can make for a crowded day on the water.

“You’ve got to compete with people beside you and fish a lot of used water,” said Murphy. “It’s tough and those boys can whack ’em. You might have 30 boats show up on one of these small lakes to fish a tournament on top of kayak anglers and other people who are out on the water.”

Still, the increase in lakes where electric is the only option and the advancements in the technologies and horsepower ensure that electric only fishing isn’t going away and as Cummings predicts, will likely be the next segment of fishing to explode onto the main scene and larger fisheries. Only time will tell but if the growth of kayak fishing over the last few years and the rise in popularity of fishing in 2020 have taught us anything, it’s to not doubt the interest and potential growth in any area of fishing. Electric-only may just be that next big thing.