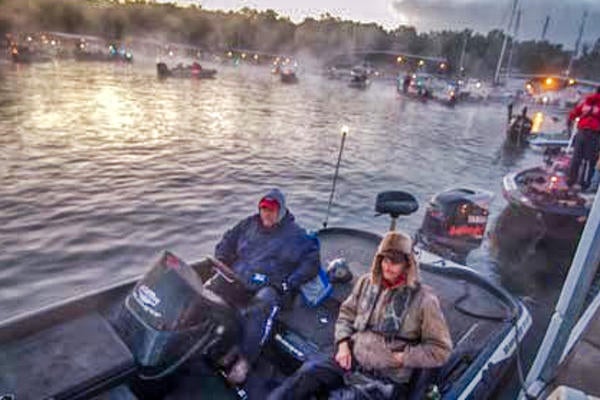 Sputtering. Spitting. Choking. No Power. The motor refused to muster up the strength to get the 20-foot bass boat up on plane. It was more like a tow boat dingy than a bass fishing machine. The angler was confused. He’d been meticulous about care for the engine and the boat.

The boat raced down the lake. The gentle breeze made for the perfect bow lift and the boat was roaring at full tilt on the way to the first stop during practice for the Central Open on Lake Lewisville. In a split second the boat lurched and started pushing water in less than 50 yards. It was like the lower unit was thrown but the boat could still get on pad although barely able to touch 3,500 RPM.

Sound like an old boat and old motor? Well it wasn’t the condition of the motor or boat at all that caused these woes. It was the well maintained boat and motor of Bassmaster Central Open pro Jason Baggett of Mansfield, Ark. The little gremlin in the outboard was a relatively misunderstood culprit called ethanol.

When we reported about the new E-15 gas laws coming down the pipe last January, we were anticipating more problems for fishing boat owners. Ethanol is not your friend if you own a fishing boat or pretty much anything that consumes gas that was not an automobile made in the last 7 years. The subsidized fuel alternative can and will wreak havoc in your bass fishing machine if you let it.

Baggett is a testament to that fact, having just picked his boat up out of the shop for more than $1,500 of damage and repairs completely caused by ethanol and its effects on fuel filters, spark plugs, fuel lines and more. Baggett fished the Central Open circuit in 2011 but was plagued by what he thought was fuel filter problems.

It finally came to a head when fishing on Lake Tenkiller on a fun trip on Black Friday, ironically enough.  The boat was sluggish, running rough and just pushed water refusing to get on plane. He pulled the boat out of the lake and headed straight for Brad’s Boat Sales in Alma, Ark. He worked with Robert Sampley, the chief mechanic on the issues and discovered that ethanol and the deposits it was creating had wreaked havoc on his fuel filters, fuel lines, spark plugs, fuel pumps and more.

Sampley has 33 years of experience and is 5-Star Yamaha and Mercruiser/Outboard certified and has seen a growing number of ethanol related issues coming into the shop.

What is Ethanol Blended Fuel

Manufacturers generate ethanol, which is short for ethyl alcohol, by fermenting and distilling crops like corn, wheat and barley. It’s the same stuff that is in alcoholic beverages. Alcohol is an amazing cleaner and solvent and its natural tendency is to bond with water. There is where the problems lie. Unlike automobiles, boats don’t go through gas as quickly. Where a car might fill up every week, boats often sit for weeks on end with the same gas in them.

What happens is a process called phase separation where the alcohol separates from the gas and alcohol bonds to any water that is inherent in the system, corrupting all of the fuel in the process. That is the second problem with boats as opposed to cars with ethanol. Boats live in a watery environment. There is a lot more water present all the time. Once a fuel tank has reached phase separation, there is no fixing it. The fuel really needs to be discarded. 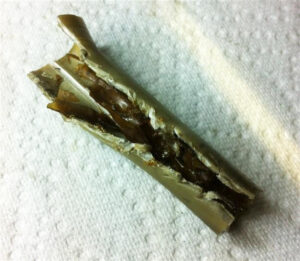 The other issue besides the water is that because alcohol is such a good solvent and cleaner it can dry out, damage and corrode plastics, rubbers and cause pieces to flake, break off and travel into the fuel system of an outboard. 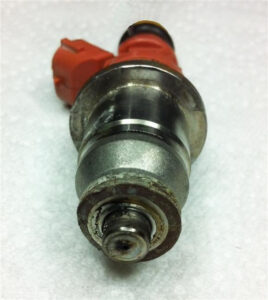 In Baggett’s case that’s what happened. He was unknowingly putting ethanol fuel that was at a much higher content than is supposed to be allowed into his boat and his boat was sitting for extended periods of time allowing for breakdown of fuel lines, filters, and other components that were creating deposits in other parts of the system. 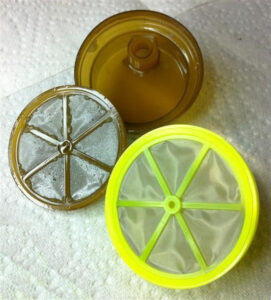 As seen in the photos here. You can see fuel lines that were cut open and inspected to find the inner walls were deteriorating and flaking off into the fuel. The fuel lines themselves became very hard and brittle. The fuel filters got gummed up with debris which also lead to fouling of spark plugs. The fuel filters swelled and broke into two pieces. Spark plug injectors filled with gunk and failed to spark. 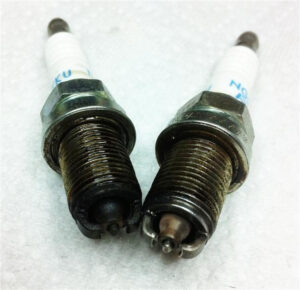 “I’m embarrassed that I let this happen,” Baggett said. “I honestly didn’t know that there was ethanol in the system and that it was doing this to my outboard.”

Some early warning signs that you might have a fuel system problem are constantly dirty and clogged fuel filters, sputtering and choking of the outboard, lack of power, premature rusting of parts, gunk and build up in the system and complete shutdown of fuel intake.

But the blame doesn’t necessarily lie solely with Baggett. Retail locations have been found to be unknowing victims of ethanol in their own gas, especially those supposedly with less than 10 percent ethanol. Stations using gas with less than 10 percent ethanol aren’t mandated to put up signs to that effect either. Sampley has tested fuels in boats at more than 24 percent ethanol levels who purchased gas from stations with no ethanol signage whatsoever. You can purchase ethanol content testers to perform these tests on your own fuels if you have concerns.

Basically you’ll follow the instructions and place 25% or 50% water in the tube with graduations on it and then add your fuel sample, shake to mix and then wait was the ethanol will bond to the water. Then by performing simple calculations, you determine the actual amount of ethanol in the system.

Sampley and Baggett offered several suggestions on how to avoid these ethanol nightmares in your own fishing boats.

“If I could save one angler from going through everything I’ve been through in the last year, it would be well worth the time,” Baggett said.

The first and easiest fix can be to avoid ethanol fuels all together in marine outboards. Seek out those stations that adamantly announced and promote they use non-ethanol based fuels only. Avoiding the root cause of the problems is obviously the best solution in any case. Test the fuel if you’re concerned. Some stations may unknowingly be carrying ethanol fuels.

Another precaution is to use a fuel and ethanol stabilizer like Lucas Safeguard Ethanol Fuel Conditioner with Stabilizers. This product will stabilize the ethanol to a degree in your system until you can burn through it all. Gas has a shelf life of about 3 weeks. After that, octane begins to diminish. These stabilizing agents can prolong that. However they cannot change the nature of ethanol, and its natural tendency to bond to water.

Buy gas from busy gas stations because their fuel will be replenished more and fresher than a gas station not frequented as much.

Replace your fuel filters every 50-100 hours, and more often if you suspect you might be getting unlabeled ethanol fuels from your local station.

Avoid running your tanks when they get close to empty. If you have had phase separation, the bottom of the tank will hold the highest water content.  You may be able to run the tanks low enough and then remove the bad fuel and discard properly. Check your state laws on rules governing this.

“I was plagued with issues that resulted from the effects of ethanol,” Baggett said. “The relationship with ethanol and me was quite volatile and it crippled me more than once this season. It’s been extremely humbling and costly.”

“Ethanol is the No. 1 reason we see in our shop for a blown powerhead,” Sampley said. “If left to do its dirty work, ethanol will make any and all rubber lines useless and cause plastic filters to swell and break. Just avoiding some of the common sense things can alleviate a lot of problems.  Things like leaving if you see a station being filled by a gas tanker. That old fuel and water separation is being stirred up as new fuel is pumped into the holding tanks.”

Ethanol is here to stay. Anglers and boaters need to be cautious and aware of the impacts to outboards and fuel systems in vessels that spend their lives around the water. Take some extra precautions up front to avoid costly repairs and downtime on the water later.

Beyond that anglers and boaters should support efforts to reform the fuel decisions being made in congress. Check out smarterfuelfuture.org to stay up to date on ethanol issues and more. Also contact your congress representatives and share your insight and opinions on ethanol fuels and the damage and costs to boaters and anglers equipment.