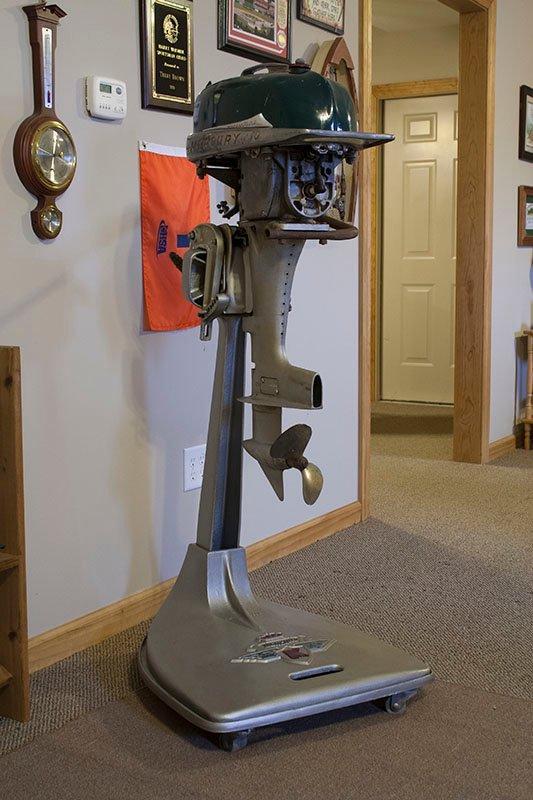 We love fishing history at Wired2Fish and love to look at old rods and reels and old baits. Every once in a while get to see and touch a piece of history that is pretty cool too. Wired2Fish buddy and fellow angler  Kenny Callahan came by and dropped off a Kiekhaefer KG-7 Mercury Hurricane Super 10 outboard today and said “this is the best place for this motor, I know how much you love this sport and the folks who walk in will love to see this old jewel. It still runs and the stand is awesome too. All original and it was one of the first race motors Mercury made.”

The Kiekhaefer KG-7 Super 10 was made from 1950 to 1952. A earlier version called the Lightning KF-7 was the predecessor to this higher performance offering. Although rated as a 10 hp motor it actually put out about 18 hp and Mercury used a marketing strategy for this motor based on rpms, not horsepower. Very unique at that time.  This too  was one of the first motors called “Quicksilver” based on a newly designed lower unit and cone. The motor retailed for around $100.00 and had a slimmer drive case and  foot and a “performance prop” different than other motors on the market at the time.

Mercury promised a 20-30 percent increase in performance with this motor over previous models.

The stand is cast and is made of 3 parts, the neck, base and a caster unit below to be easily rolled around at dealer locations. It too is original.

Cool engine, put a smile on our faces and looks great at Wired2Fish Offices. Thanks Kenny! 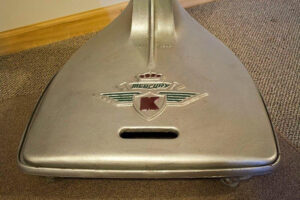