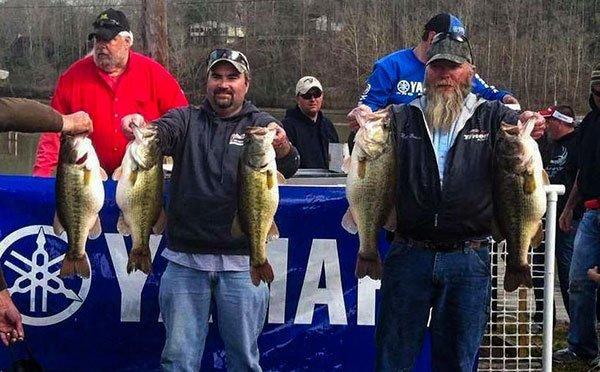 On Saturday a photo started circulating on Facebook of some anglers fishing in a tournament on Lake Chickamauga on the Tennessee River. They caught a 5-bass limit weighing 44.3 pounds. We had gotten word a week earlier about the awesome fishing on the “Chick” from some friends fishing over there. But Saturday’s catch is impressive anywhere in the country from California to Texas to Florida and maybe a even a bit more impressive in Tennessee.

Chickamauga has been on fire and Richard Simms talked with anglers and biologists over there in his column on Nooga.com. Click the underlined link to read his story.

Kudos to Tim Saylor (left) and Rogne Brown (right) for their impressive catch. Can you imagine catching 35 pounds and losing by 10 pounds in a one day 5-bass tournament?