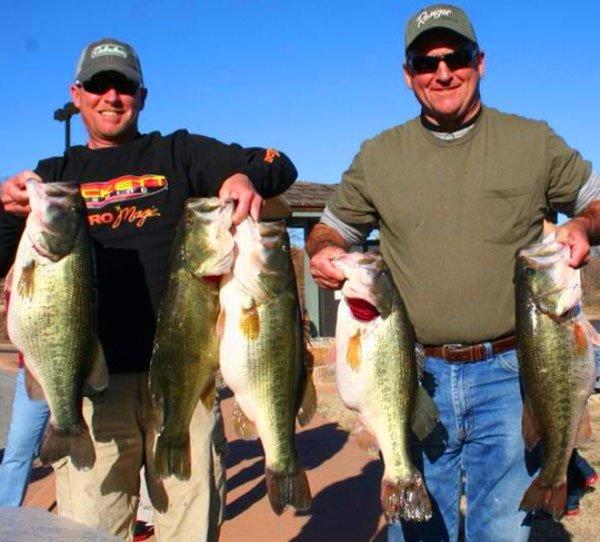 Bluebird skies, high pressure and 40-degree water temperatures aren’t exactly a bass angler’s ideal conditions. Those were the conditions that faced Valera, Oklahoma resident Jeff Reynolds and his partner as they entered into the first Backyard Bassin tournament of the yearâ€”a free entry fee promotional tournament on Oklahoma’s Lake of the Arbuckles.

Reynolds fished the Lake of the Arbuckles earlier in the week for the very first time. After a terrible practice with only 2 fish over the 13-16-inch slot limit, both caught in 50-feet of water on a jigging spoon, he was left with a sour taste in his mouth.  To the best of his knowledge, all he could figure out was that both the bass and bait were deep. Despite his subpar practice, the entry fee-free tournament was enough to convince him to try his luck. Little did the angling duo know, they would soon experience a day they’d never forget.

“It had been pretty cold here for a while and people were complaining about the tough fishing,” said Reynolds. “We had a small warming trend in the forecast, so my partner and I decided to fish the tournament and see what would happen.”

As the team arrived to their first spot, they noticed the baitfish glued to the bottom. Although he didn’t use it during his practice, Reynolds turned his HydroWave on in an attempt to stir things up. Within minutes, he noticed bait flickering on the surfaceâ€”something he never saw in practice. Picking up his Livingston Lures Stick Master jerkbait, Reynolds fired a cast into to the action. After catching a small keeper, Reynolds boated a monster bass that proved to be the beginning of the epic slugfest.

“I’ve always been pretty old school, believing in a few trusted lures to catch my fish,” Reynolds said. “The Livingston Stick Master, however, has a sound chamber that emits a croaking noise. I really believe it was a key to my success.”

Not long after boating the first big bass, the team laid into a second 7-plus pounder, again with the Livingston Stick Master. Thinking they had something figured out, they remained persistent with the jerkbait but were unable to draw another strike.

After fishing numerous spots in the 2,350-acre reservoir, Reynolds put down his jerkbait and opted for a homemade bass umbrella rig. Although the bait and bass were again glued to the bottom, Reynolds, who isn’t affiliated with Hydrowave, noticed a huge increase in activity after activating his unit.

“We never saw active baitfish in practice, but my Hydrowave made all the difference in the world,” Reynolds said. “As soon as I’d turn it on, the activity would increase tenfold and the bass would move up in the water column and suddenly become catchable.”

With the baitfish schooling and the bass not far behind, the team was able to land two more giant bass with their homemade umbrella rigs. They figured they had a “decent” limit, but had no idea they were on the verge of a 40-pound limit.

Just like the jerkbait bait bite, the umbrella rig bite died rather quickly. Throughout the day, Reynolds and his partner never caught more than one fish in a single spot. With such a small amount of space to work with in the crowded fishery, they simply put the trolling motor down and covered as much water as possible.

The partners were able to catch two more tanks on a 3/4-ounce Strike King Tour Grade Football Jig. The gravity of the situation didn’t quite hit them until they were trying to cull.

“It started to hit me when I had a 7-pounder and an 8-pounder hanging on both ends of my balance beam,” Reynolds said. “I never really analyzed the fish throughout the day. I just put them in the livewell and kept fishing. When I started trying to cull and saw my Ranger’s livewell absolutely stacked with bass, I realized that we had a pretty good sack.”

Even upon realizing their success, both Reynolds and his partner only believed their weight to be about 32-pounds. With a competitive streak of a seasoned tournament angler, Reynolds thought they needed more.

“I told my partner that if we hung into a 10-pounder, we’d close the deal and win the tournament,” Reynolds said. “He just looked at me like I was crazy.”

The double-digit bass never bit that day, but they didn’t need it. With a five bass limit of 42-pounds, Reynolds and his partner ran away with the victory, eclipsing second place by 14-pounds and third place by an astonishing 26-pounds.

“We just went out there to compete, because that’s what we love to do,” Reynolds said. “We were very fortunate that day, but everyone thinks we caught a bunch of fish. We caught five big ones, another 7-pounder that didn’t keep, a 3-pounder and a 16-inch smallmouth. It was still a grind, as crazy as that sounds.”