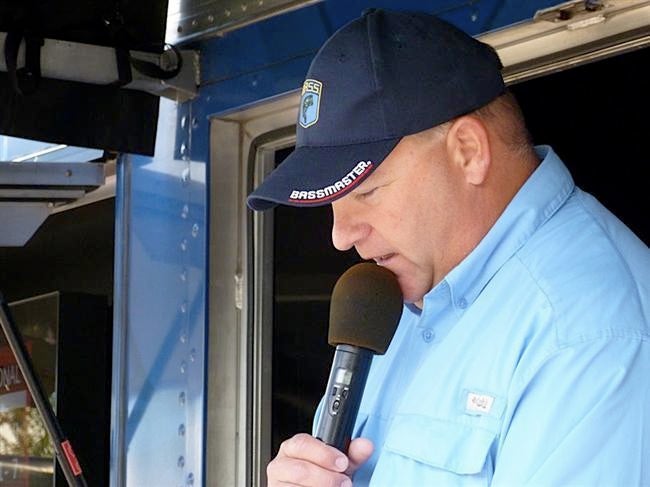 Where do the lights shine on you?

Who are you, when you dream?

Are you meant to be where you are at?   Or should you be over there – somewhere, not here?

I believe that dreams are the universe’s way of telling you “¦ there!

“¦ and you wake up right before you land.

Right before you fall into “¦ THERE.

I often wonder about those who have followed their dream, who have landed where they are supposed to be. Do they toss and turn like me?

Or do they peacefully sleep?

Because when they fell, they landed.

“”¦and each road leads you where you want to go”¦”

Hang with me here for a minute.

I’m searching around for a story, come across an angler from Maine, Joe Holland is the dude, great angler, could be a future Elite if he gets the bucks to make the jump.

As a human being, the guy is already an Elite.   I tell Joe, I tell all those who ask me what it takes to be an Elite, tell them all the same thing “¦

Be an Elite in whatever it is you do.

That’s how you get to “The Show.”   No matter what your Show may be.

So this Joe guy tells me about his dream “¦ to be a pro on the competitive fishing gig.   And it’s 5:30 a.m., and it’s cold. It’s that sticky misty rain stuff, and it’s cold. AND IT’S 5:30 a.m. IN THE MORNING and not in the night which is slightly better because it must have been a really good night if you are still up and in it instead of a really bad morning because you are up and in it.

In his dreams, Joe is still falling, but he is so close to landing he can smell the ground.

Something dreamt his way comes.

So I write that story about Joe, “If”¦” hit the send button, and move on, take a shower, get looking almost respectable, and head to the Jr. Bassmaster Welcome Dinner where I know there will be parents, young anglers and chocolate frosted brownies.

Right on all counts.

I do my welcome to all the kids, while at the same time scaring all the parents.

Then the official B.A.S.S. welcome begins, and as I stand in the back of the room eating what possibly might be my third brownie.

I’m listening to B.A.S.S. dude up at the podium thing talking.

And he’s talking about dreams”¦and following your dreams.

AND I’m thinking this”¦

Attorney”¦Plagiarism”¦another brownie….thinking this because this B.A.S.S. dude obviously read my story and is taking whatever he just pleases out of it like it’s his own darn dream thing and not giving me the atta-boy I deserve for putting my words in his brain in the first place which is the exact definition of court induced suffering from plagiarism.

So, the moment he ends his stealing words way I go up to the podium, as if that would protect him, and I say to him”¦dude what are you doing, at least say something modest like, “What an amazing, intelligent, bazillion hit kind of story db wrote today and let me QUOTE his words NOT mine,” something simple like that and when I SPIT that out he just looks at me and says “¦

“What are you talking about?”

Which I reply something about my lawyer (which I would actually have to go find one somewhere) and the B.A.S.S. dude is looking down at me, not socially but taller legs wise, and he says, SAYS, “db, I don’t know what you are talking about, I didn’t read your story yet, have no idea what it is about, but I love songs, singing, and I have always wanted to be a Rock Star.”

Which is almost exactly what my story was about.

Except the Rock Star stuff.

I just wanted to write the songs, write the lyrics.

But he wanted to stand on his stage and sing the lyrics.

“db, I used to have hair halfway down my back.”

And now, his hair is halfway to his ears.

But only half of it.

“”¦I hope that the days come easy and the moments pass slow,

And each road leads you where you want to go”¦”

Meet, the lead singer of”¦”Xenolith,” as he announces how much your bag of Bass weighs.

“Xenolith”¦it means something like the Pillars of Rock,” said Stewart.

We are sitting in a pizza joint. He’s waiting for his Lasagna, I’m waiting for my baked Ravioli and the two other B.A.S.S. dudes have gone the Chicken Parm and Spaghetti route.

They have their mouths open.

And the food isn’t here yet.

This, it seems, is all new to them as well, Jon Stewart”¦Rock Star.

“As a kid, I grew up wanting to be a Rock Star, told people when I was a freshman in high school that’s what I was going to be.”

Jon came from a musical family, his father played trumpet in the Army Band, and both mom and dad sang, and according to Stewart, “They are very good Christian Music singers. In fact I’m betting that was my true calling, but I wanted to be a Rock Star.”

Christian music”¦Xenolith”¦The Pillars of Rock”¦you know where this is going.   Yep.

“My high school band we were invite to play at some big school concert, I was the lead singer, started playing the drums but couldn’t do both at the same time, sing and play drums, so I was the lead singer and when it was our turn we got up on stage and I sang the song, “Highway to Hell” by AC/DC”¦came home from school that night and my father grounded me for a week.

“We sent in a tape of our band to MTV and they actually played a bit of it on some sort of segment like Basement Tapes or something like that.”

Jon smiles, takes a bite of Lasagna….”Nope, never did, no.”

Could be because his classroom, was the road.

“We played all through Kansas and Nebraska, mainly played Rock n’ Roll and Heavy Metal like Judas Priest, Guns & Roses, Cheap Trick “¦ in fact we opened every night with me singing “Surrender” by Cheap Trick.

I would have used that song to open this story as well until, you know, I googled it and read the lyrics.

I need this job.

And Jon doesn’t open the weigh-ins singing Cheap Trick songs, so I took a pass.

“We played a bunch of bars that had chicken wire protecting the band from stuff being thrown at them.   I remember one place when we walked up to the door to get in it had a sign on it that said, “No Guns, No Knives, No Glass,” and when we ordered beer they gave it to us in plastic cups, they really meant No Glass”¦so I asked the owner ‘Well how are we supposed to know if the crowd doesn’t like you,” and he laughs and all he says is, ‘Oh you’ll know, you’ll know, trust me you’ll KNOW.”

Tell you what I do know “¦ Jon Stewart is a great singer.

I know, because I have heard him, if you have been to some events you may have heard him as well.   Not so much the AC/DC stuff anymore, but the Stars & Stripes”¦many times Jon will belt out the National Anthem at the event.

He did so in Vermont, and when he was done, when I watched the crowd, more than one mouthed WOW to those around them.

I myself mouthed WOW, not so much for his singing, but for what he told me next at the Pizza Joint.

“”¦and if you’re faced with a choice, and you have to choose,

“I think the Little League is one of the purest sports left out there, I watch every game I can of Little League.”

On his vacation “¦ VACATION “¦ Jon volunteers to umpire Little League baseball games in the town of Celebration, Fla. where he currently lives.

Jon has worked his way up to umping at the state playoff level and hopes to someday be chosen to ump the Little League Show “¦ the World Series.

“How could you not? All that those kids go through to get there; they dream about being there, and so do I.”

As you drift off to sleep.

What’s the voice behind your lids whisperin’.

As you drift down, in sleep, in flight, my wish for you, for Jon, is that someday, your feet touch down.

And when you open your eyes, there is here.

There is where you belong.

The one, the universe built for you.

“”¦my wish, for you, is that this life becomes all that you want it to,

Your dreams stay big, and your worries stay small.”