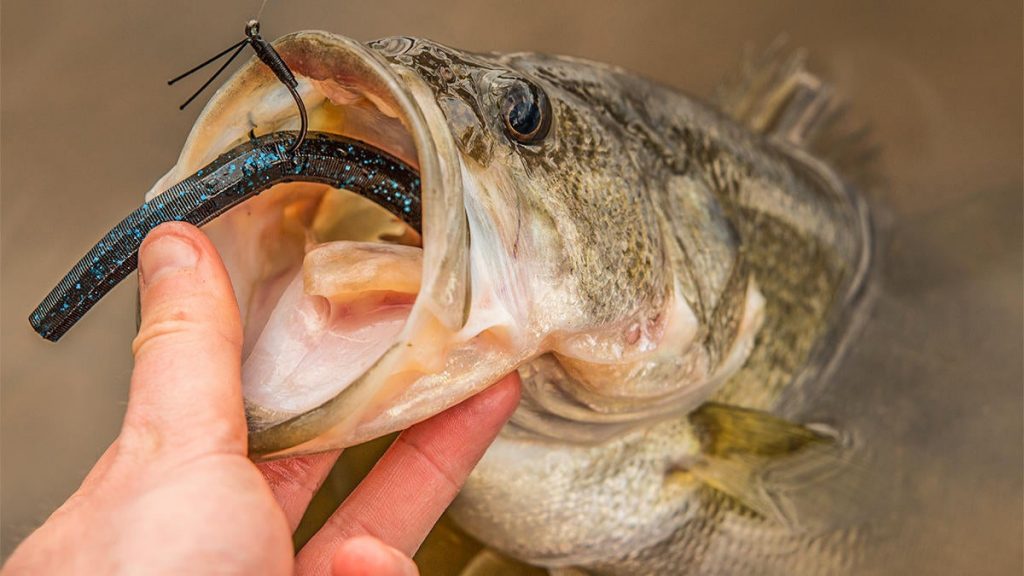 Bass anglers who fish from shore, whether by choice or not, face obvious mobility limitations and, even if you’re up for a lot of walking, the bank is the bank — you take what it gives you. One of the key principles here, is recognizing water dynamics and leveraging them to your benefit.

On the shallow Florida lakes and ponds I fish, it’s all about finding those key areas where cover, depth and access align. One of my favorite ponds where I enjoy direct shoreline access has a cement seawall with a storm water drain pipe next to the property from which I access the pond. Next to the pipe, a small wooden dock provides shady cover that meets the edge of a small pad field that covers about 200 square feet.

Basically, it’s a dream setup for pitching, skipping and crappie style shooting baits under dock cover and working the pads with topwater and perimeter presentations. But for now, I want to share two examples of how I’ve learned to play this scenario — one specific, one general. Consider the broad applicability of these lessons wherever you fish from shore. 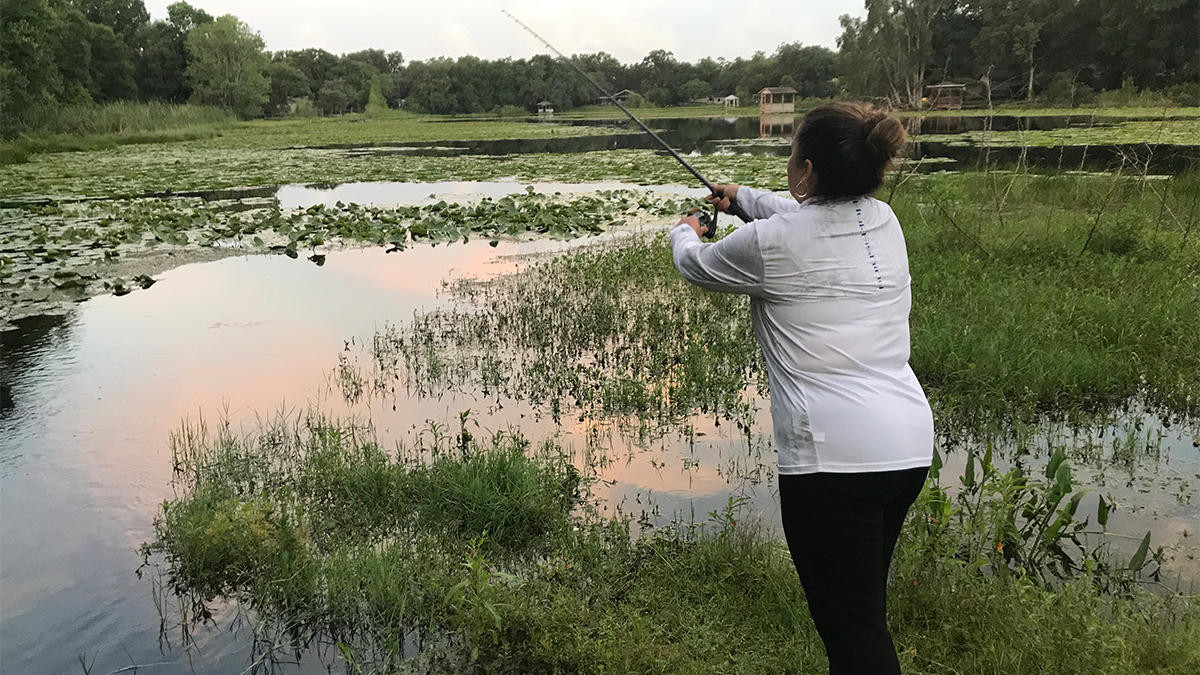 During the dry season, the ditch in front of the drain pipe sprouted a small stand of arrowheads. Once the rains started, that stiff vegetation caught stringy grass and created an ambush spot for bass laying just outside the current. Problem was that bringing my worm from the corner where the dock met the seawall toward the drain gave me a tight window of opportunity, as bass would often flare up and nip at the bait just as it was climbing over that vegetation line.

Once the bait hit that current, it would fly out of the zone pretty quickly. I got a few shots, but hookups were less common.

The solution: Cast farther inside, hug the seawall and bring my bait behind the arrowheads. I had to thread a needle on that one, but it allowed me a longer presentation. First time my worm slipped around the arrowheads, it was already lower in the water column and the 2 1/2-pounder laying below the pipe gladly obliged. 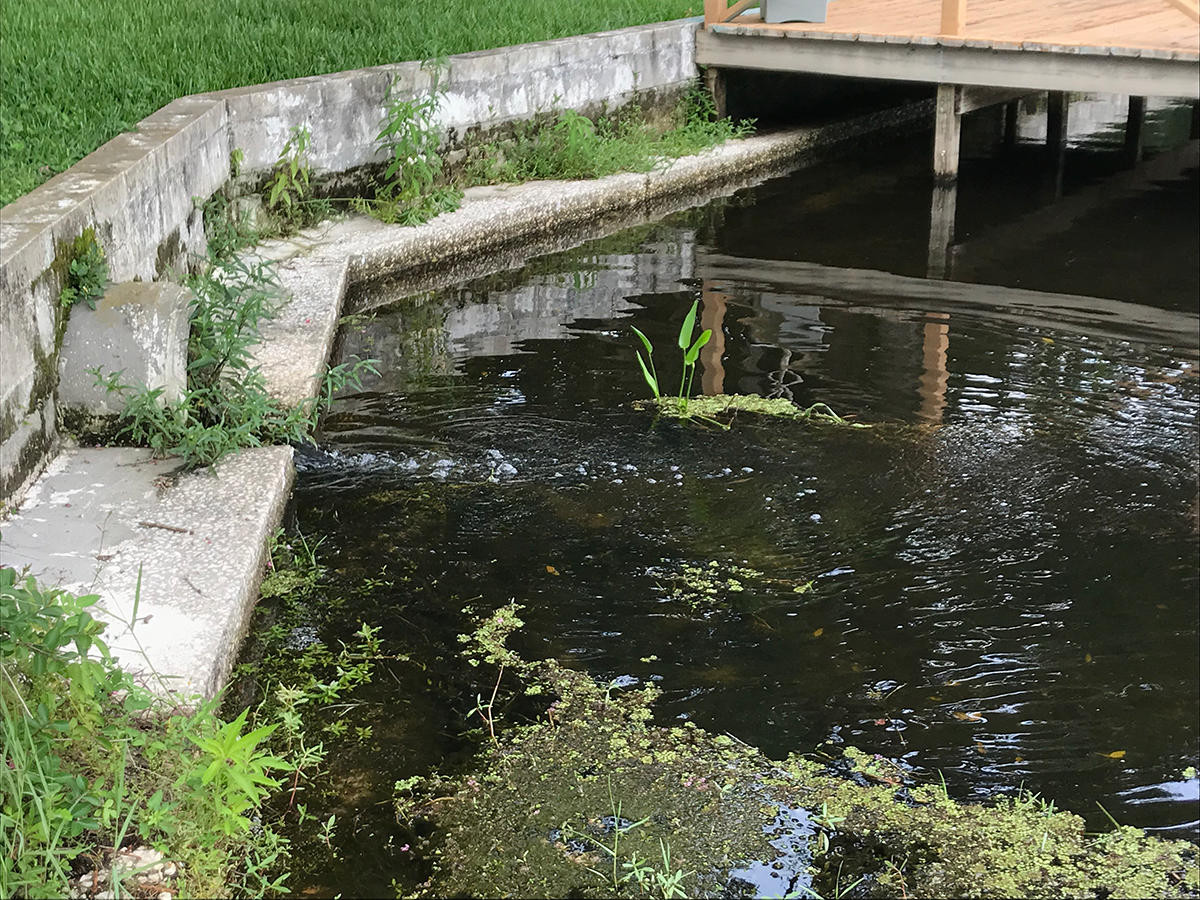 A few years ago, another neighborhood lake advanced high enough to flood local yards. The drain running under the road and into the pond I fish couldn’t keep up with the influx, so the county ran an overflow line beneath the street to provide a secondary outlet close to the fixed drain pipe.

This not only served the purpose of alleviating the nearby flooding, it significantly changed the makeup of my shoreline access point. The force of the secondary outfall formed a scour hole right off the seawall and piled all that sediment into a sandbar reaching about 8 feet from the bank, with the rest settling across the shallows in front.

The bar runs roughly parallel to the dock, so I now have a direct shot for reaching all nearside sections and even skipping or shooting baits to the far side. Prior to the sandbar, I had a much more narrow angle of presentation.

The additional sediment also allowed more pads to root in front of the dock, well within casting distance. (More cover equals more opportunity.) Now, one of my favorite deals is casting a Senko into the pads (careful to avoid those annoying notches) slowly drag it onto the duckweed and other light weeds accumulating on the forward edge and then let it free fall.

This does two things: 1) It often tempts active bass with that movement-overhead deal and yields strikes through the light perimeter cover.

2) It overcomes the dilemma of presenting a bait in the right direction. Specifically, I’m standing next to a drain pipe and pitching or short casting a bait to the cover. If it enters the water right at the edge of the cover, it looks realistic and, in fact, leverages more of a reaction bite.

The problem here is that once I start retrieving the bait, it’s basically swimming upstream and fish are less likely to show interest. By sliding it through the pads and across the light perimeter cover, it remove the current contradiction and when the bait drops off the edge, it sucks under the mat as any current-born forage would. 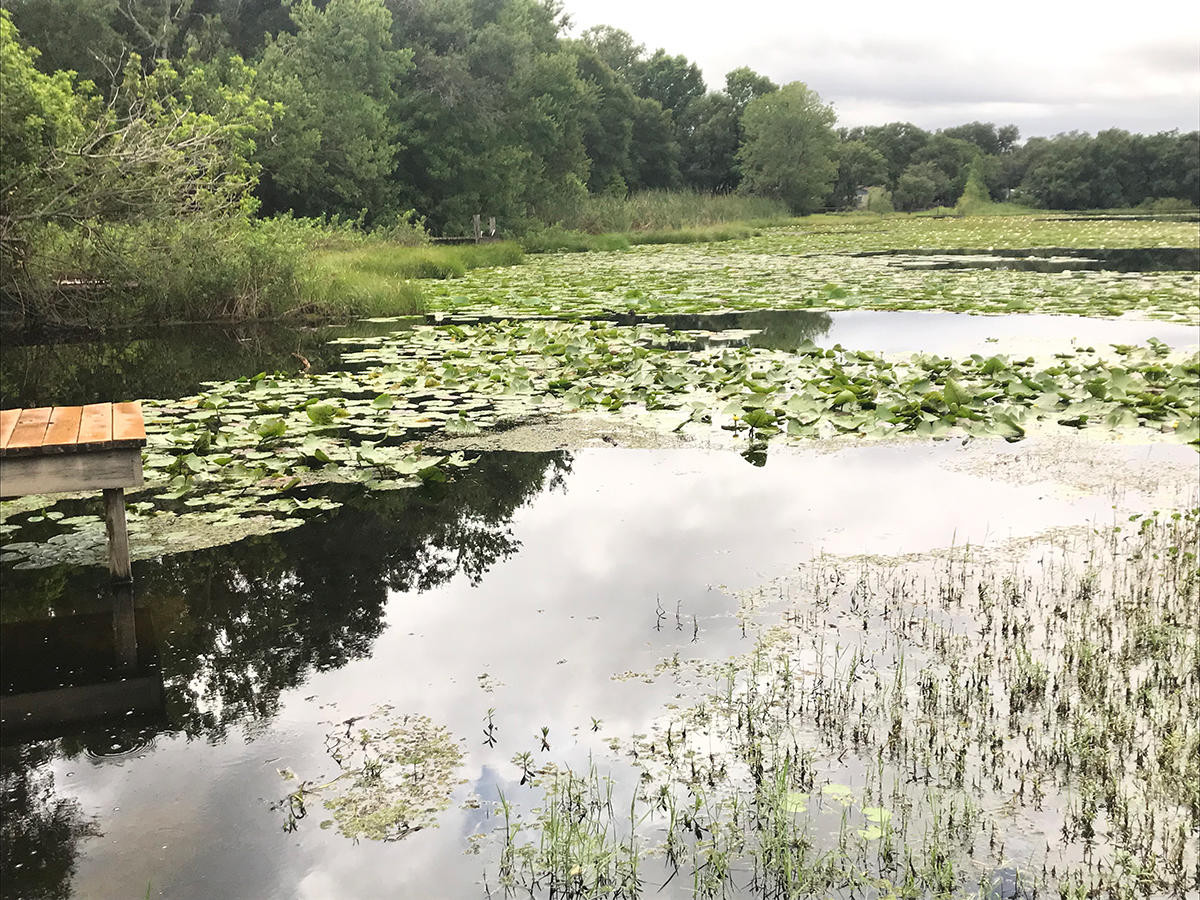 At times, when the pipe’s running swiftly, the current pushing into the perimeter weeds forms a particular little pocket about the size of a 5-gallon bucket opening. I call this the “death hole” because each time I drop a bait in there, the fish kill it.

The key, I’ve found, is presenting a Texas-rigged worm to the spot’s center with a well-aimed pitch – easier to target than an overhead cast, plus the bait subtly enters the water like a dart, rather than a heavy plunk that might spook fish in this shallow habitat. Once the bait enters the water, I give it some slack so it continues sinking into the strike zone, while remaining alert for the slightest tick of a feeding bite. 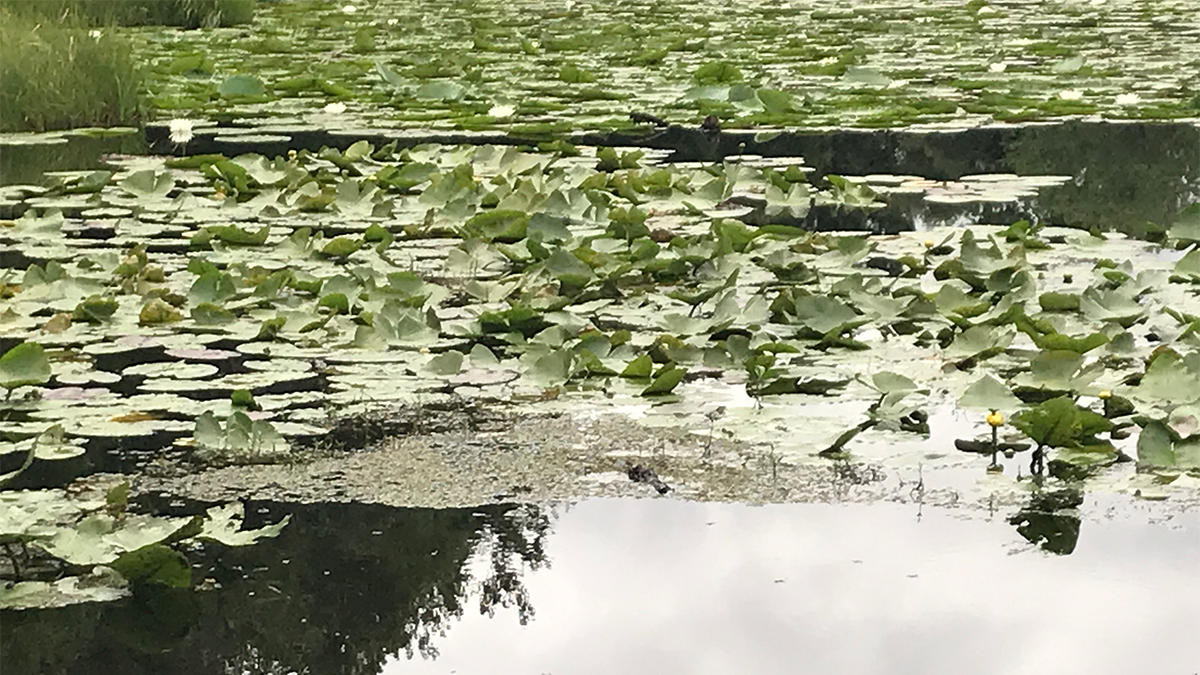 When late-spring and summer rains wash bugs and other edibles into the shallows and push my favorite pond several feet into the shoreline grass, minnow congregations prove irresistible to the little bass that regularly catch my eye with sudden surges into inches of water where they grab as many minnows as they can before sticking their bellies in the mud.

I’ve plucked a few of these young-and-dumb ones that’ll submarine wake after a swimming worm in 6 inches of water; but the ones that operate in that range aren’t the ones I’m seeking. No arrogance – just time management.

Twice on one particular stretch of bank where those little guys patrol, I’ve spotted more substantial bait-showering activity in deeper water. Presenting a bait with a targeted cast, I immediately stretched my string on fish worth catching.

Both were 8-plus-pounders that could’ve eaten those shoreline rats. Come to think of it, maybe that’s why those little fellas were sticking to the skinny stuff.