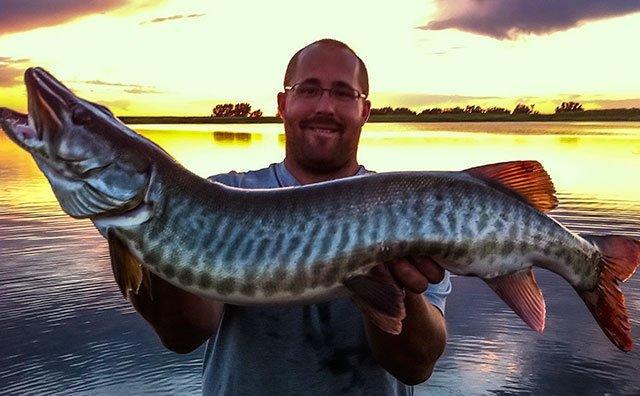 Lake management expert Nate Herman knows a thing or two about growing big fish, but his records aren’t the only ones that prove ” transplants” grow biggest and best.

The accumulation of state record data adds weight to Herman’s contention that extremely large fish are:

When Nate Herman calls, I listen

A discussion about lake and farm pond management practices with Nate, the mind behind Herman Brothers Pond Management, sets my mind reeling for weeks on end.

Herman creates countless fisheries, from tiny ponds to lakes of several hundred acres. Some of his waters have such varied and complex structure and biodiversity that, had you come blindfolded, you would swear you were fishing a vast reservoir.

Last week, Herman sent me photos of a musky and hybrid striper caught at one of the lakes he manages. The musky photo showed a fat 42-incher that he might have passed off as a 42-pounder were the truth not in him. The hybrid striper was thick and well fed, to say the least.

The musky was only four years old!

Neither catch surprised me. Herman often grows huge fish on lakes he has designed or managed. But the recent catches compelled the Peoria, Ill.-based lake maker to reflect on the reasons behind his success.

“Whether the species is smallmouth bass, catfish, hybrids, crappieâ€¦we can always grow the fish we stock into big fish. Why?” Herman asked himself. “With any game fish, the first year or two of life is pretty rough in a pond, small lake or even a big body of water. But when we can grow a fish first at a hatchery pond or fish farm or sanctuary of some sort, they really have a chance to grow into trophy fish.

What particularly interested Nate was that it didn’t matter if he had tailored lake management practices to a specific species. He often could grow giant fish — largemouth bass, smallmouth, hybrid stripers or muskellunge — with multiple species in the same body of water.

His memory flooded with more examples, and the questions each raised. Why , for instance, was the rare catfish always growing to big proportions in a pond where bass “stunted out” at 12 inches?

In most cases, the lone or “outsider” species wasn’t reproducing.

Controlling numbers of the species reduced competition in the niche the fish occupied. They may even have spared individual fish the stress of annual spawning.

State record fish catches also convinced him he could turn this knowledge into a fisheries management principle.

“I’ve really dug into it, and I’m finding that state record fish basically are stocked fish,” he assesses. “Rarely do you find a trophy of record proportions that is born in a given body of water and has lived in that body of water his whole life.”

Herman’s observation got me thinking, too, about countless records and fish anecdotes. I recalled a northern pike from a private strip mine lake that briefly held the Illinois state record. I used to fish that lake regularly with friends, and rare indeed were the pike we caught.

My fishing buddy John Hynds manages a 28-acre lake with an abundance of relatively small carp but nary a big buglemouth in the bunch!  My cousins, on the other hand, own a farm pond that everyone believed to be carp-free — until a 35 pounder surfaced one day. 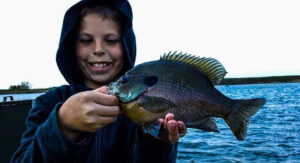 Herman has been applying this simple principle to pond and lake management practices.

“I am growing bigger fish by stocking them at one to two years old,” he explains. “I am especially applying this to managing smallmouth in ponds. We can grow really big smallmouth just by stocking fish at a slightly advanced stage of development. You really don’t need them to reproduce. In fact, the research on stocking sterile largemouth bass seems to indicate we can grow almost all these fish to three or fourâ€¦ on up to six or seven pounds.

The management logic goes beyond stocking a fish too big to get eaten, too, Herman stresses. Fish need an adequate food source at each stage of their development! And sparking an early growth spurt helps them in multiple ways.

“Often by stocking musky at 12 to 16 inches, they have a much better chance of growing big,” he explains. “If they are only eight to 10 inches when they enter the system, yes, they can be eaten, but they also may not have a food source sufficient for them to do well, to hunt effectively.”

He has stepped outside the box to apply the principle to stunted bass populations, too.

“People think I am insane when I tell them to stock 50 14-inch bass per acre in a lake with a bass population stunted at 12 inches,” Herman said. “The key point is that stunted fish are old by the time they reach 12 to 14 inches. But once a fish gets past the (size) hump of that population, it finds so much food available!” 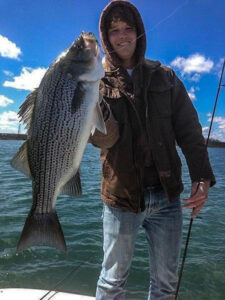