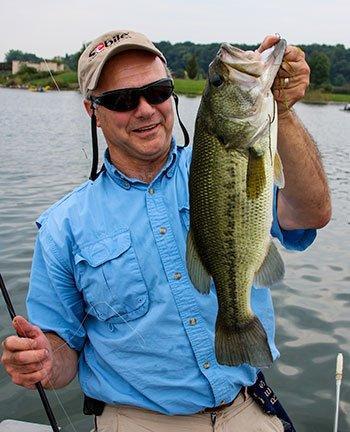 Man moves earth. Water fills the cavity. That’s the “voila” formula for creating quarries and draw pits. With help from man or the patient work of nature, structural elements emerge much like those found in reservoirs and natural lakes. Find a fertile water off the beaten track, and you may have lucked into a bass bonanza!

Quarries and draw pits are some of the most overlooked fisheries in the country.

But hold fish, they do! And many produce big fish, too!

What are they and where do you find them

Draw pits are those little lakes you commonly see along major highways. Road construction operations extract earthen material for bridges, road construction and related needs. The leftover holes fill with water. Most draw pits are on the property of private landowners, but many are formally or informally open to anglers

Communities and county districts often purchase surrounding lands to create public parks around these often-scenic waters. Some become pay-to-fish waters that depend on intelligent management practices to maintain quality fishing.

Quarries and draw pits may take time — or a little help from man — to reach their fish-producing peak, however.

Most start out clear and infertile until various life forms take hold and help form a viable food chain.

If you have a hand or influence over the management practices of the pit, consider fertilizing the lake regularly — but carefully — to increase the lake’s fish-pound-per-acre capacity. Effective fertilization could increase its fish output three to eight times!

Often Nature takes care of the job on her own, though at a far more leisurely pace.

Extreme water clarity and relatively bare banks are almost sure signs of young and probably infertile pits. As waters gain fertility, you will see either darker water or more aquatic plants â€“ simple signs that the lake has the underpinnings of a productive food chain.

Don’t shy from clear water alone. These lakes are likely to remain clearer than your average farm pond even when their pounds-per-acre capacity has multiplied. Submerged vegetation may not be immediately visible either.

Unless the land/lake owner had the foresight to drop cover and create structure, the lake bottom may be relatively featureless. That will change somewhat â€“ though not always dramatically — as the lake ages. Over time, erosion along banks creates points and flats. These become not only fundamental structural elements but areas where vegetation and cover can accumulate generating prime shelter and feeding areas.

Never ignore subtle points, corners, grass edges and pockets, which are prime locations to find bass and panfish. Look for drainpipes and runoff areas that may have created channels and ledges.

Also look for signs that fishermen have planted their own cover. A cast that snags up on a tree branch 30 feet from shore could be evidence of sunken brush that harbors bass, crappie, bluegill, catfish and almost any other species.