The very feature that attracts Brad Knight to small crankbaits also presents a significant challenge — a hindrance handily overcome with spinning gear. Sure, we hear “crankbait” and our mind instinctively goes to baitcasters. Not incorrect; just not a complete thought.

“In East Tennessee, where I grew up, homemade balsa crankbaits are a big deal; and they’re so light that you can just be so much more efficient throwing them on spinning tackle,” Knight said. “Can you go out on a day when it’s sunny and 75 degrees and there’s no wind and throw these lures on a baitcaster? Sure, but those are rarely the days you’re throwing a crankbait in the winter.

“Usually, there’s wind in play and it’s nasty outside. You have more control throwing them on spinning gear and for me, it’s all about efficiency. I don’t have to fight backlashes, so I can throw farther and make more casts in a day than someone trying to use a baitcaster.”

“You come around a windy point and you have to fire that crankbait out there; with a spinning outfit, I don’t have to worry about backlashing,” he said. “Drags used to be so pathetic on spinning reels, but that’s not the case so much anymore.

“I can still fish with gloves on and it’s not a big deal. With baitcasters, you’d have to cut the thumb out of your glove; and thumbing a spool with really light line can be (difficult). But with spinning tackle, fishing these light baits is just a lot easier.” 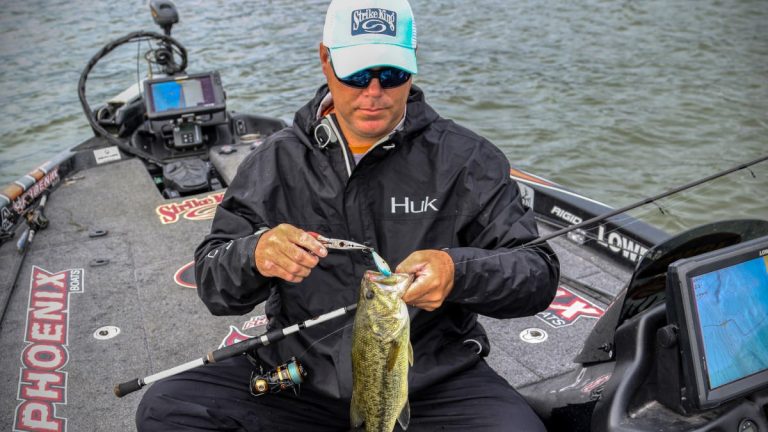 Line: Copolymer’s not as stiff as fluorocarbon in cold water and that limp nature further facilitates small bait management.

Reel: The larger spool of a 3000 series promotes longer casts and handles that limp line well.

Rod: Knight says the limber tip and parabolic design affords him longer casts, plus the ability to fight a fish on light treble hooks.

“That tip enables me to load up that bait and make longer casts and have more play with a lighter bait,” he said. “Also, when you’re cranking, you don’t want to have a real stiff tip. You want to have some play there, so when a fish comes up and inhales the bait backwards, this allows it to get the lure better. And, with light line, that parabolic design allows you to play the fish better.” 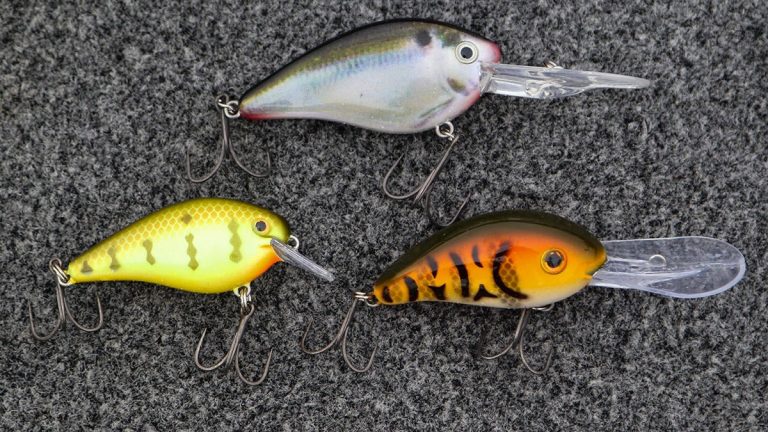 Strike King 1.0 — Don’t mistake this bait for just a smaller version of the more common 1.5 squarebill. Rather than intentionally knocking around cover, he uses the 1.0 to present a subtle profile for cranking down shallow pea gravel or mud banks in 3-4 feet with the added benefit of deflection.

Strike King 1.5 Flat — A tight wiggler for that 6- to 7-foot range, this bait offers an action similar to a homemade balsa bait without the brittle body. This one’s a good bet when early prespawners start nosing up to those steeper, rocky banks.

Strike King 3XD — Offering a wide wiggle and a hard thump, this 8- to 9-foot bait is Knight’s choice for slowing down and plodding along rocky banks. Notably, he’ll sling this one on a spinning rod year round.

Knight said he doesn’t sweat the potential for tempting big fish on his winter crankbait outfit.

“I’ve caught 30-pound stripers on the same setup,” he said. “I’ve had my string stretched a couple of times by some pretty big fish and I’ve never had any issues.

“Some may get nervous fighting fish on spinning rod, but it’s just a matter of doing it long enough to get comfortable with it. I’d just as soon catch one on a spinning rod as a baitcaster. All the signs point to an advantage not disadvantage. That’s why I do it.”