Donâ€™t let the nasty, cold weather this winter keep you off the water. Although coldwater bass have a well-deserved reputation as being obstinate and tough to catch, fishing with deep crankbaits can drastically increase your success.

Elite Series pro and 2008 Bassmaster Classic champion Alton Jones does some of his best work when the bass begin relating to deep water. In fact, heâ€™s caught well over 60 bass exceeding the 10-pound mark with a deep crankbait. Not too shabby, right?

According to him, there are some important aspects to understand in order to ensure your wintertime deep cranking is up to par.

Why throw a deep crankbait? 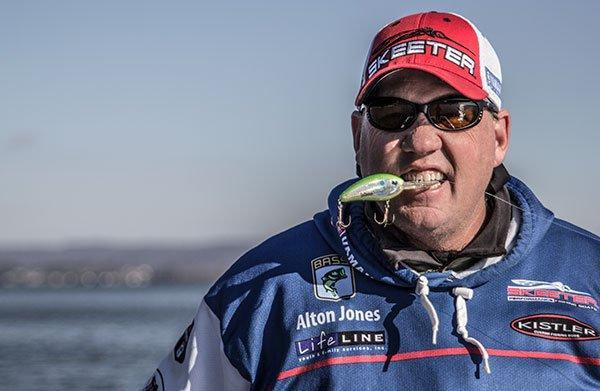 Yes, itâ€™s trueâ€”coldwater bass may not go to great lengths to actively pursue their prey. Itâ€™s cold, their metabolism is slow and theyâ€™re going to exert as little energy as possible. Itâ€™s important to realize, however, that they still have to eat and a deep crankbait can entice these inactive bass to feed out of pure instinct.

â€œA lot of times in the winter, bass are feeding on shad and crawfish,â€ Jones said. â€œWith small color changes, deep crankbaits are outstanding imitators of both types of forage. Even if a bass isnâ€™t hungry, a big crankbait swimming in front of their face can trigger their predatory instinct to attack.â€

Although you can certainly catch winter bass in shallow water, Jones targets deep water to take advantage of its â€œinsulation factorâ€. When a cold snap hits an area, bass will make a concerted effort to find the warmest and most stable water.

â€œIn order to escape declining water temperatures, bass will move deeper in the water column where the water is more insulated,â€ Jones said. â€œWhen your area gets a cold spell, the very first water to cool will be the shallower depths closer to the surface. In turn, the deeper water is much more stable and insulates the bass from the immediate effects of the cold weather. Itâ€™s just like having a thicker wall on an ice chest.â€

Know when to use it

When deciding to throw a deep crankbait, Jones closely monitors the current weather conditions. If it looks like a good day to be throwing a shallow spinnerbaitâ€”in warmer weather, of courseâ€” heâ€™ll have a big crankbait nearby.

Jones’ favorite crankbait is a Bomber Fat Free Shad. He’s caught more giant bass with it than any other crankbait. When the bass are feeding on shad, he primarily uses the Dance’s Citrus Shad and Dance’s Pearl White colors. If they’re eating crawfish, he suggests the Texas Red Sparkle color.

â€œIâ€™m always going to lean more towards deep cranking when there is some sort of cloud cover present,â€ Jones said. â€œIt can be partly cloudy, overcast or rainy, but sunny conditions arenâ€™t ideal. Iâ€™m also going to look for some sort of surface disturbance, whether itâ€™s a slight ripple on the water or a strong wing. As long as itâ€™s not a calm, clear day, you should catch some fish.â€

â€œIf the conditions line up, Iâ€™m going to start the day deep cranking until the fish tell me otherwise,â€ Jones said. â€œIt allows me to be much more efficient and effective. I can show it to more fish, cover large areas quickly and I really believe bigger bass are more susceptible to reaction lures. When I look at the bass Iâ€™ve caught over 10 pounds, Iâ€™ve probably caught 70 percent of them on a deep crankbaitâ€”there has to be something to that.

Never underestimate the power of a long cast 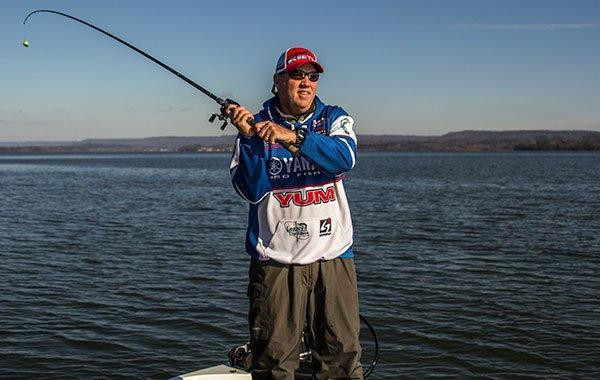 Long casts will certainly help your cause with many bass fishing techniques, but casting distance is especially imperative when using a deep crankbait. Not only will a long cast help you avoid spooking the bass, but it will also get the crankbait in the most productive section of the water column.

â€œThe winter months are an outstanding time of year to target giant bass,â€ Jones said. â€œWhen youâ€™re targeting these big ones, your odds will skyrocket if you can put more distance between the two of youâ€”the close you get to â€˜em, the more aware they are. It also helps you get the bait to its proper operating depth easier. If a bass is 40 feet away, your cast needs to be 60 feet because the first 20 feet of your retrieve will be spent getting the lure down to the strike zone.â€

Contrary to popular belief, the best wintertime areas to deep crank are not the same areas you would target in the summer. Jones looks for three primary areas, all of which share one common denominator.

Needless to say, creek channels play an integral role in Jonesâ€™ wintertime deep cranking strategy. There are wintering holes on every fishery and, according to him, theyâ€™re always located near the deepest part of a creek channel.

â€œA lot of times you can find these wintering holes where the current cuts into the creek channel and creates a hole,â€ Jones said. â€œIn a reservoir, these holes may be in 20 feet of water, but Iâ€™m going to fish the drop-offs closest to those holes. If you idle under a bridge, examine your graph and take mental notes, it will be much easier to find a similar area along the same creek channel.â€ 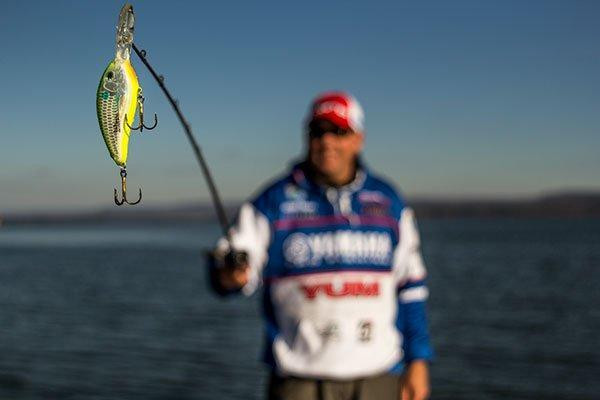 There are times of the year in which your crankbait casting angles arenâ€™t a primary concern, but this isnâ€™t one of them. Casting angles are a big key to your deep cranking success and Jones employs a very methodical approach.

â€œI always want to cast my crankbait up-current and retrieve it down-current because bass are notorious for positioning nose-first into any available current,â€ Jones said. â€œLetâ€™s say the fish are on the side of a point closest to the boatâ€”the crankbait will dive down into the point and go right over top of them. If you position on the other side of the point, itâ€™s going to dive right down to the fish.â€

Regardless of the situation, Jones makes it a point to try every possible angle before moving on. This experimentation can often lead to hot action, cast after cast.

â€œItâ€™s not uncommon to catch a bass casting at the wrong angle,â€ Jones said. â€œIf you donâ€™t catch another one, that one bass did something very importantâ€”it clued you in to the schoolâ€™s location. If you move around and try different angles, you can fine-tune your approach and figure out how to catch all of them.â€

Whether youâ€™re fishing a shallow or deep-running crankbait, your retrieve is critical. The bassâ€™ preference can change daily, so similar to your casting angles, experimentation should always be considered.

Feel the bite and use a proper hookset 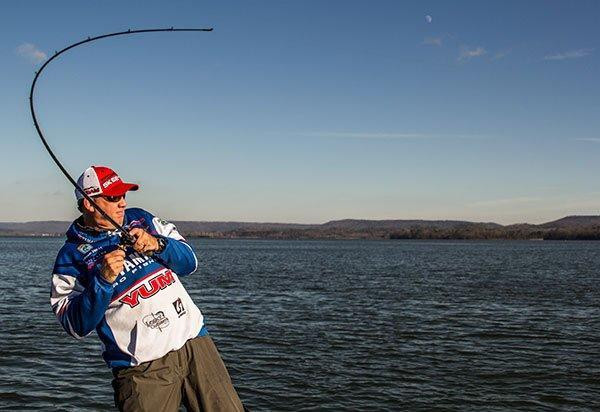 Newcomers to deep crankbait fishing often become frustrated when attempting to discern a bite from a collision with cover. According to Jones, however, itâ€™s important to go with your gutâ€”youâ€™ll know when a bass hammers your lure.

â€œThere will be no question about a deep crankbait biteâ€”thatâ€™s the beautiful thing about this technique,â€ Jones said. â€œThe bite will, however, be different depending upon your retrieve. With the burn-and-stop method, the strike will be incredibly strong and arm-jarring. With the slow crawl retrieve, itâ€™s probably going to feel soft and spongy. The faster youâ€™re moving the bait, the harder the strike is going to feel.â€

When it comes time to set the hook, try to avoid â€œsnatchingâ€ at all costs. A crankbait hookset is drastically different from a soft plastic or jig hookset.

â€œYou donâ€™t have to come off the floor when you set the hook on a deep crankbait,â€ Jones said. â€œYour hooks arenâ€™t as heavy and you also run the risk of pulling the bait away from the fish. When you feel the bite, simply lean into them and keep the line tightâ€”donâ€™t overpower the fish. It it wants to run, let it run. If it starts swimming toward you, just keep a solid bend in your rod and youâ€™ll be just fine. Your worst enemy is slack line, so make every effort to avoid it.â€

The next time the fishing bug bites this winter, donâ€™t succumb to the cold weather. Learning the intricacies of coldwater deep cranking will take time, but if you keep one in your hand enough, youâ€™re going to give your bass fishing arsenal a whole new dimension.