The current frosty conditions may not be conducive for great bass fishing, but football jigs offer a ray of hope in an otherwise tough fishing season. When water temperatures plummet and bass activity screeches to a halt, these deep water jigs can cure even the toughest case of lockjaw.

Elite Series pro and 2008 Bassmaster Classic champion Alton Jones places a lot of trust in football jigs throughout the late winter months. Not only did this technique play an instrumental role in his Classic win, but he also considers it one of the most essential tools in his wintertime bass fishing arsenal.

His in-depth tips will help you make the most out of the remaining weeks—or months—of winter.

The difference between football jigs and traditional jigs

“Think about a football rolling around on a patch of grass,” Jones said. “There’s no possible way to predict where it’s going to go. The same thing happens with a football jig. As you bump it along the bottom, the small points on each end of the head catch on each piece of cover it hits, causing it to pivot away from cover and create a lot of commotion. A traditional jig, on the other hand, is just like a soccer ball—you know where it’s going to go when you roll it and it doesn’t leave much to the imagination.”

If you spend enough time on the water, there’s a decent chance of running across small populations of shallow bass. The majority of bass, however, are likely to spend most of their time in deep water. This biological preference makes it imperative to utilize a presentation that gets down to the bass quickly and stays in front of them. A football jig does just that.

Football jigs are much more user-friendly around hard cover such as rocks, sand and gravel. It’s not a favorable option for vegetation as its head will collect large amounts of weeds and grass.

Heavier—“Football jigs are usually much heavier than traditional jig styles,” Jones said. “This added weight allows you to maintain bottom contact throughout your entire retrieve, therefore increasing your time in the most productive strike zone.

Covers water—“Football jigs are meant to cover large amounts of water in a short amount of time,” Jones said. “I’m going to use them in areas void of excessive cover in which the bottom composition itself acts as cover for the bass. You can make very long casts with it, it falls quickly and you can retrieve it rapidly, effectively combing an entire area in search of aggressive bass.”

Vibration transmission—“The larger surface area of a football jig’s head transmits vibration to your rod tip very well,” Jones said. “So much of winter fishing revolves around the detection of hard bottom compositions, which makes it important to feel what’s going on down there. This technique will alert you to very subtle differences in composition which, in turn, can result in giant bass.”

Broad timespan—“In my experience, I’ve never seen the conditions too cold for a football jig,” Jones said. “As long as the lake isn’t iced-over, it will catch bass. With that being said, I’ve also caught a lot of fish in 90-degree water with one as well, so it’s extremely versatile. It’s one of those baits that will continue to produce in a plethora of conditions.”

Where to fish a football jig 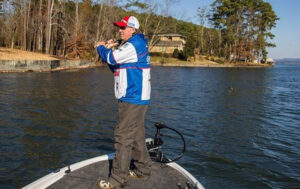 As mentioned earlier, Jones focuses his efforts toward the deeper depths when fishing with a football jig. By concentrating on areas close to deeper water, he’s able to make high-percentage casts and develop a pattern proficiently.

Sun always helps: Jones prefers sunny as opposed to cloudy weather when fishing a football jig. These conditions tends to push bass closer to the bottom, making them easier to target and catch.

The cast, retrieve and hookset

Fishing with a football jig is very different when compared to more traditional jig styles. You won’t see Jones making short casts, slow retrieves or enormous hooksets. He bases his style of fishing around efficiency.

As long as you can keep contact with the bottom, you’ll be able to get bites.

There certainly some bottom-oriented bass fishing techniques that require precise weight selection, but Jones doesn’t make it too complicated when he’s fishing with a football jig. The most important aspect is bottom contact.

No bass, no problem

Professional anglers invest countless hours learning to quickly eliminate dead water. While many techniques require the presence of bass or bait on their electronics in order to warrant a cast, fishing with football jigs is very different.

Keep an eye out: Even if your electronics fail to indicate activity intitially, you’ll often see bass come to life after catching a few. The activity of other fish being caught will ignite the school and lead to better fishing.

“Throughout the winter, both bass and bait can get so close to the bottom that they become invisible on your electronics,” Jones said. “This makes it unnecessary for me to see activity on my units before casting my football jig. If I see a good-looking spot with some type of change in topography, I’ll always make a few casts. This is one of the few baits that can catch those invisible bass consistently.”

It’s tough to get motivated to endure the elements this time of year, but football jigs can save a tough day of winter bass fishing—they’ve been doing it for years. The next time you have trouble getting a bite in nasty conditions, consider a football jig. If you can understand how it works, where it works best and how to fish it, you have a great chance of catching giant bass.

What’s the biggest bass you’ve ever caught on a football jig? In what depth of water did you catch it? Let us know in the comments!