FLW Tour professional Tom Redington rummaged around his truck bed, looking for what I presumed to be another tackle box. When Redington pulled an old Folgers Coffee jug from his truck bed, I thought maybe he needed some coffee before a morning of fishing. Only after seeing the fancy piece of duct tape slapped to the outside of the jug with the words “tail spins” on it did I realize that it was me who was confused.

“A tail spin is one of my old secret weapons,” Redington said. “They have been around forever, but a lot of guys don’t even own them anymore. The fish don’t see them much anymore, so when the situation presents itself, a tailspin can be an absolutely amazing bait.”

What is a tail spinner

When inspecting a tail spinner, you can understand why many anglers look past them. The lure itself consists of only a few simple pieces of hardware: a small piece of lead, a single treble hook, and a small Colorado blade. Not a lot of flash or “sexiness” to catch an angler’s attention. This very well may be the key to the lure’s effectiveness.

“A tailspin is simply a cross between a jigging spoon and a spinnerbait,” Redington explained. “Those are two of the most effective lures that have ever been made. A tail spin may not be sexy, but it catches fish.”

Typical tail spins, like the Mann’s Little George or Revenge Tail Spinners are offered from 1/4-ounce up to 1-ounce versions, and can be used in wide variety of circumstances. Redington, who uses a tail spin exclusively for offshore scenarios in cold weather, throws either a 1/2-ounce or the 1-ounce model.

Because so few people fish tail spins these days, Redington knows fish in deep, cold water will eagerly react to one; and not just bass either.

“Maybe the best way to tell a tailspin works, is how many different species of fish will eat this lure,” Redington said. “I have caught bass, bluegill, crappie, white bass, and even catfish when fishing with a tailspin. It is pretty incredible really; they must mimic a dying baitfish perfectly.”

Both from his experience on the FLW Tour and through years of running a guide business, Redington has noticed many anglers have a problem throwing such a small bait.

“This may be a tiny bait, but it is no doubt a big fish catcher,” Redington grinned. “I’ve had many guide clients on Lake Fork catch absolute monsters with these little things. It’ll get you a lot of numbers of bites, that’s for sure, but certainly don’t rule out the possibility of a big bass on a tail spin.” 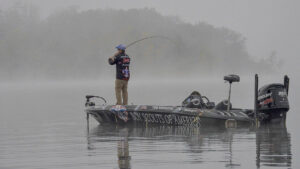 Where to throw tail spins

While Redington believes a tail spin will catch fish all year long, throughout the fall and winter is when Redington relies heavily on this lure. After several years of experimentation Redington has figured out the intricacies of this presentation and where he likes to fish it. First and foremost, if Redington is employing a tailspin, he’ll be out over deep water.

“A long, flat, relatively barren point is one of the best places to throw a tailspin,” Redington said. “On Lake Fork in the fall, bass will get in what I call ‘mega-schools’ with other bass, crappie, white bass, and even catfish. They’ll roam around these open points, following the baitfish. I use my Garmin Electronics to find the fish and stay on them. Making short casts to the school and keeping them fired up.”

Just like the bass out on the points, Redington oftentimes finds huge schools of baitfish in one little area of a flat inside a major creek. Usually they’ll congregate around one small area because of a depth change, or a certain piece of structure.  During the fall and winter, when Redington finds the bait he knows the bass aren’t far away.

“With the new Garmin Panoptix technology, it is amazing how much an angler can see,” Redington explained. “Panoptix mounts on your trolling motor and actually scans the water right out in front of your boat. Making me 100x more efficient in finding the bait, and the bass. It sounds crazy but you can even see single fish roaming around on a flat. Then it’s just as easy as casting your bait out to them and setting the hook!”

The last scenario Redington opts for a tail spin is suspended fish in open water. Redington again uses his electronics to find the fish and then sits right over top of the bass and vertical jigs his tail spin for them.

Many anglers call this “video game fishing” as you can often watch the fish come to eat your lure on your electronics screen.

“When it gets sunny and slick in cold weather and those bass get suspended, they’ll still fall for a tailspin,” Redington said.  “Once you find the fish, situate your boat right on top of the school and drop your tailspin down to them, almost like you’re ice fishing. Use your electronics to stay on the school, and you will catch the fire out of them.”

How to work a Tailspin

While Redington has dialed in on a few precise ways he like to fish a tailspin, he urges you to experiment with different retrieves.

“When I talk about stroking a lure, I am talking about explosive action,” Redington said. “I’ll employ this retrieve when the fish are aggressive and the water is still fairly warm. Start with your rod parallel to the water and then quickly lift your rod towards the sky with a swift motion. You really want to rip the bait off the bottom and try to get a reaction strike out of the bass.”

“Using a slow rise and fall retrieve is probably how I fish this bait more often than any other way,” Redington said. “After the bait hits the bottom, you want to slowly start reeling it back in, keeping the bait of the bottom and the blade of the bait slowly turning. Then you just want to vary the speed of your retrieve and oscillate your rod as you work your bait back to the boat. It’s almost like an exaggerated yo-yo retrieve. This works well on fish throughout all stages of the fall and winter, whether the water is warm or frigid.”

“The last way I find myself working a tailspin is by slowly creeping the bait along the bottom, or ‘worming it’ as I like to call it,” Redington said. “I do this when the water is really cold and the fish are inactive. Move your rod from 10 to 12 o’clock, maintaining some slack in your line, and slowly creep the bait along. You want to keep the tailspin low in the water column, bumping the bottom as you go.”

Because he uses a tailspin in specific situations, Redington’s equipment for fishing a tailspin is extremely important and equally as explicit.

“I like a longer Dobyns 804 CB rod when fishing a tailspin,” Redington said. “There are a lot of reasons why, but mostly because it allows me to make longer casts and cover more water. Once I get a bite, that 8-foot rod really picks up a lot of slack in a hurry; which is important with those deep tailspin fish.

“The medium action of the 804 loads really well, so you don’t pull the lone treble hook from the fishes mouth. As far as a reel goes, just make sure you have a high-speed reel, like a 7:1:1 or faster. Same deal as with the longer rod, the high-speed reel will help you pick up slack and catch up to those deep fish.”

“I vary the size of my line depending on where I’m fishing,” Redington explained. “At home on Lake Fork where there are a lot of huge bass and lots of timber, I throw 17 to 20-pound P-Line Ultimate Fluorocarbon. But if I’m on a clear fishery away from structure to hang up on, I’ll go down to 10-pound or even 8-pound fluorocarbon. Fluorocarbon is really a necessity though, as it gives you the sensitivity to feel the blade thumping and to feel those light bites.”

If the bass in your area become tough to catch as the water cools, follow Redington’s advice and give an old tail spin a try. A tailspin is an overlooked, yet extremely effective presentation for bass and will help you catch more fish throughout the cold months. 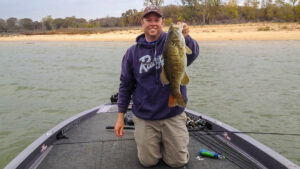