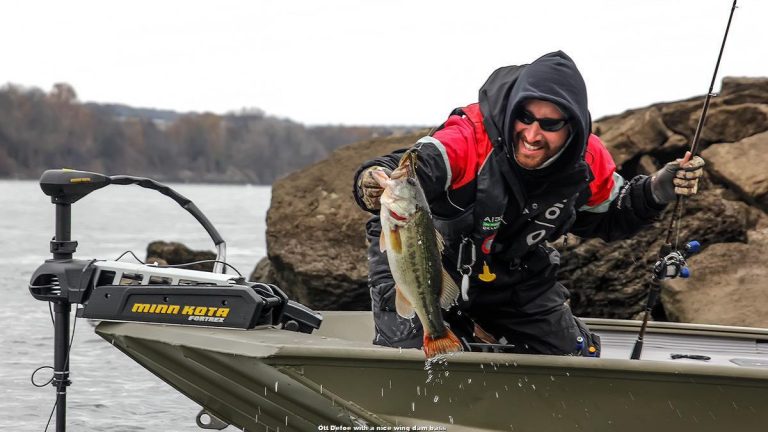 BASS Elite Series anglers Stephen Browning, Bill Lowen and Ott Defoe are known as three of the best in the business at fishing rivers, and all three have won multiple tournaments strictly fishing wing dams.

We got them to put their collective heads together and put together a list of wing dam doâ€™s and donâ€™ts that should give you the confidence to either learn how to fish wing dams this upcoming season, or to do it more effectively. 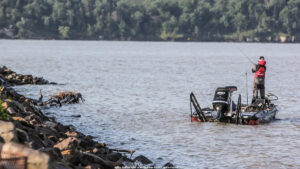 What is a wing dam

Itâ€™s no coincidence that many of our most populated areas are located along rivers. Rivers provided early peoples with fresh water, abundant food and fertile soils. As our civilizations advanced, they also became our means of transportation and allowed for the efficient shipping of goods, something that is still a major use for our rivers.

As the volume of freight destined downriver increased, the size of necessary shipping craft also increased. As the barges got bigger, the seasonal low water and siltation of natural rivers became problems effectively shutting down barge traffic for long periods of time.

To combat this issue, regulatory agencies like the Army Corps of Engineers, the Tennessee Valley Authority, and others installed lock and dam systems to allow them to control flow and ensure there was enough water in the channel to facilitate year-round shipping.

As a part of the lock and dam program, the regulatory agencies also installed a number of other engineered structures in our rivers to assist with shipping. One of the most common is the wing dam, or jetty.

If youâ€™ve ever been on or driven by a river like the Mississippi, Arkansas, Tennessee, or Ohio, youâ€™ve likely seen a wing dam. They are long dikes built of rock or rubble that jut out at an angle from the bank.

Their purpose is to direct the flow of the river to the main channel, prevent siltation, and during extremely low water periods, cut off flow to backwaters so that all available water is in the shipping channel.

But there are certain aspects of fishing these structures that anglers should consider doing and not doing when adding them to their rotation of likely fishing spots. 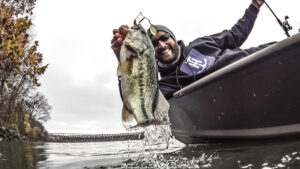 Fish more than one

You canâ€™t learn to catch bass on wing dams if you donâ€™t fish them, it is imperative to not only fish them, but to fish multiple wing dams over the course of a day.

â€œWay too many guys will pull up on a wing dam, make a couple casts â€“ donâ€™t get bit, then leave and go do something else,â€ Lowen said. â€œThatâ€™s not gonna help you learn how to fish them. I routinely spend several hours of a practice day fishing wing dams to determine where the bite is best. Most of the time, itâ€™s not a matter of whether there is a wing dam bite, but rather which ones have fish.â€

Look for something different

Browning has a simple rule for recognizing which wing dams may be better than others, and itâ€™s to always be on the lookout for something different.

â€œOpen any fishing magazine, and youâ€™ll hear guys talk about how important it is to find something different no matter what type of fishing youâ€™re doing, whether it be on a ledge, a drop-off or a point,â€ Browning said. â€œWith wing dams, itâ€™s the same thing. Bass will concentrate on little differences in each wing dam. Things like a little gap where the current dumps through, a high spot, a change in rock or rubble type, or a spot where a laydown has washed up on it and got stuck. Those little unique spots can load up with bass.â€ 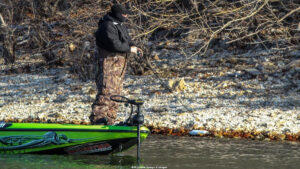 The tackle industry has become unbelievably diverse. That is a good thing for anglers everywhere, and Lowen has benefitted in many ways from the explosion of new baits and techniques. One place the new techniques havenâ€™t affected him though is in how he approaches wing dams, where simplicity is the key.

â€œYouâ€™ve got a lot going on with wing dams, between boat control, watching your bait in the current and fighting bass away from cover, itâ€™s difficult to concentrate on some new-fangled pattern in which you lack confidence,â€ Lowen said. â€œItâ€™s important anglers stick with simple techniques in which they are proficient so they can fish more confidently. I only use two things on wing dams, an Ima Square Bill, and a Tightlines UV tube. The bass on wing dams are usually hungry, so simple patterns work.â€

Defoe has spent enough time fishing wing dams that he has developed a detailed understanding of how bass use them differently during different weather conditions. One of the most important observations heâ€™s made is that as the water temperature drops, the fish will move to areas with less current.

â€œIn the summer, most of my wing dam bass come from places where the current is strongest,â€ Defoe said. â€œIn fall and winter, the bass move more into the slack water parts of the wing dam. Lots of people think the bass just leave the wing dams in the winter, but thatâ€™s not true in a lot of places. Theyâ€™ll move to that dead water eddy on the back side of the wing dam and you can still catch them. Youâ€™ve just got to move with them.â€

Half the reason that anglers struggle with wing dams is that it can be nerve wracking to control your boat in the current, and nervous anglers donâ€™t make for happy anglers. To combat this, in heavy current Defoe employs a technique he calls â€˜slipping downstreamâ€™ where he puts the nose of the boat up current and only uses the trolling motor to control and slow his drift, versus fighting it the whole time.

â€œIf youâ€™re fighting current strong enough that you have to keep your trolling motor on high just to move forward, youâ€™re just gonna get frustrated,â€ Defoe said. â€œIn those situations I like to keep my boat facing upstream but drift backwards. Iâ€™ll use my trolling motor to slow the drift and avoid obstacles, but not to move against the current. Doing that allows me to still get good casts in to the structure and after Iâ€™m through the hole Iâ€™ll just idle back up and do it again.â€

Things not to do

In his many years fishing tournaments, Lowen has seen lots of mistakes made by other anglers while on the water. Chief among those mistakes is seeing anglers fishing in current â€˜backwardsâ€™, or retrieving their baits upstream into the current.

â€œThis one is a really big mistake that I see too many folks make,â€ Lowen said. â€œBass will always position with their noses into the current. If you throw downstream and bring your bait back up current, youâ€™re literally bringing it past their heads from behind and they wonâ€™t get a look at it. Always, I mean always cast upstream and bring your bait back with the current. Sure, itâ€™s easier to just fish downstream, but I promise youâ€™ll catch five times more fish going into the current.â€

Another common mistake anglers make on wing dams is that they avoid the portions of the wing dam that are in the heaviest current, mistakenly thinking that the bass will avoid it. Defoe said that this is a big no no, and itâ€™s something he wishes people would forget.
â€œThe current is what provides a wing dam bass with all his food,â€ Defoe said. â€œThe most actively feeding and therefore aggressive bass on a wing dam will always be up on top or in the front where the heaviest current is hitting the rocks. There are plenty of little cracks and rocks to hide behind that you canâ€™t see. I always target the heaviest current first every time I come up on a wing dam, then work to the more slack areas.â€ 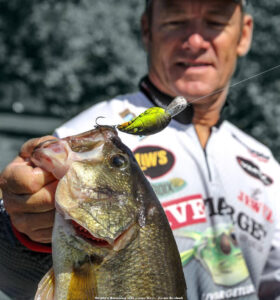 Fishing reaction baits in current and rocks means one thing to a lot of anglers; snags. Browning has certainly lost his fair share of baits to wing dams, but said snags are more often caused by anglers that are trying to be cautious then by anglers actively seeking deflection.

â€œI see guys all the time fishing crankbaits through rocks like theyâ€™re fishing a worm because theyâ€™re afraid to get hung up,â€ Browning said. â€œDoing that will actually result in more snags because the bait isnâ€™t moving fast enough to keep its trebles in the shadow of its bill. When Iâ€™m throwing a square bill on a wing dam, Iâ€™m always moving it at a pretty good pace. Not burning it, but not slow rolling. If your bait hits the rocks at that higher speed, itâ€™ll deflect away from them and actually snag up less. That deflection is also what triggers a lot of strikes, so youâ€™ll also catch more fish than slow crawling it.”

Get in a hurry

Fishing a wing dam too fast is also a common mistake that Browning sees from other anglers, and itâ€™s one that even heâ€™s been guilty of in the past.

â€œItâ€™s really easy to pull up on a wing dam, make a couple casts, and then take off for the next one,â€ Browning said. â€œYou have to try to resist that urge though because being thorough is the only way to maximize what you catch off a wing dam. Think about it, there is current and rocks with the bass hiding in little nooks and crannies. If you just make one or two casts, there is a good chance that a bass didnâ€™t even see your bait because it will come over the wing dam differently each time. If I think a particular spot has potential, Iâ€™ll make 10 or sometimes 20 casts to seemingly the same spot.â€

As important as the previous nine doâ€™s and donâ€™ts are, there is one last donâ€™t that was extremely important to all three pros, and thatâ€™s that you donâ€™t pass them by.

â€œWing dams are probably one of the most misunderstood and underrated pieces of bass structure that we fish,â€ Browning said. â€œThey are good almost all year, have the potential to hold big ones, and the super nice thing is that wing dam bass are usually really aggressive.â€

Lowen echoed that sentiment, and added that wing dams can be an especially effective tournament pattern when the bite on other parts of a river system has sputtered. â€œIn the mid-summer, or any other time the fishing gets tough on a river, targeting wing dam bass is a great tournament pattern, and Iâ€™ve won a lot of money doing just that.â€