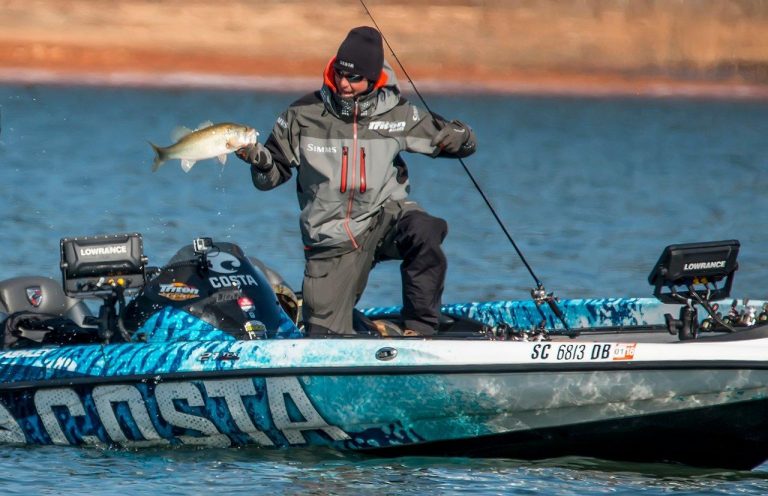 Follow migration routes to stay with the fish from season to season. It seems like such an easy staple to follow in fishing. There’s nothing wrong with admiring a creek’s natural beauty and enjoying its pleasant solitude, but amid the aesthetics, it’s an understanding of the fish-friendly relevance that drives us toward the bent rod. Points, edges and wood cover all matter at times, but during winter, you’ll fare best in the ditches and drains.

Bassmaster Elite Series pro Mike Iaconelli used this strategy during the 2015 Bassmaster Classic on Lake Hartwell. Placing sixth, he took advantage of what he refers to as seasonal highways. These migration routes provide bass safe and comfortable conduits into and out of the creeks and bays that serve their fall feeding and spring bedding needs.

“Hartwell is a great example; there’s a lot of areas that I call featureless bottom where those fish are moving in and out of,” Iaconelli said. “(During the Classic), a lot of those fish were going back there to feed on bluebacks in the morning. There were also a lot of fish already staging to spawn and their ultimate goal was to get into that featureless pocket.

“To get from Point A to Point B, 99 percent of the time, they’re going to use those ditches and drains if they’re available. They’re never going to go in some random movement across that featureless bottom. They’re going to focus on that ditch or that drain.”

“In the fall, they tend to slide off (the ditch) to follow that bait, but they’ll never be far from it. But in winter, they’re always in that ditch.”

Classic champion Casey Ashley also leveraged this seasonal pattern during his Hartwell win. Well-acquainted with the tactics and strategies, he explained the primary driver for winter ditch abundance.

“The fish follow the bait and the baits looking for oxygen, so that’s why they get in these ditches,”  Ashley explains. “It doesn’t matter whether it’s a creek, or one of these runoff ditches from rain and melting snow.

“It doesn’t matter how cold it is, as long as there is some kind of water coming into the drain and bringing oxygen because that’s where the bait wants to be.”

Ashley typically targets smaller creeks and drains, as a lake’s main feeder creeks bring so much water that can turn too muddy and cold for fish to tolerate. Within the ideal arteries, he’ll refine his search by trying to determine specific hot zones.

“A lot of times, when you’re doing this, the fish will set up on some type of [prominent feature], whether it be a turn, a hard spot on top of the creek channel, a stump, one lone piece of timber — something that the fish are going to relate to,” he said. “Whether they’e suspended or on the bottom, they’re going to relate to something.” 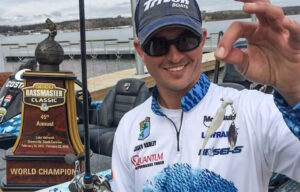 1. Blakemore Casey’s Classic Runner – He likes a 3/8-ounce horsey spinner head and pairs it with a Zoom Super Fluke Jr. Ashley’s underspin follows the design his dad built for the Classic. A versatile bait style with a long history of success on Hartwell and other blueback herring lakes, the underspins not only perform well for ditch dredging, but they also fit an unexpected cold-season opportunity.

“My favorite time to use this bait is winter because they get on big bait schools,” Ashley said. “People don’t realize, fish will school during the winter. It can be 45 degrees and there will be fish schooling.

“They won’t hit a topwater, but they’ll hit that underspin. No matter what depth the fish are at; that’s a bait I can fish top to bottom.”

2. Zoom Super Fluke – Ashley rigs the bait on a 1/4-ounce darter style head for a gliding motion and uses more of a stroking presentation. He’ll let the bait hit bottom, stroke it up a few feet and then let it fall like a vulnerable baitfish.

3. Zoom Swimming Super Fluke – Rigged on a swimbait jig head sized appropriately for depth, the swimbait gets the call for targeting suspended fish.

Iaconelli’s favors a 1/2- to 3/4-ounce football jig with a bulky trailer as much for the tactile reference, as the slow, plodding appeal to cold-season bass. Knowing the ditch’s general layout, he’ll cast up to the edge and walk his jig down the edge to feel his way along the bottom and determine specifics of what’s ahead.

John Murray, the Western stick who recently relocated to Spring City, Tenn., knows an influx of early spring rain water or melting snow following a drastic warming trend will dirty the water and influence the fish to move higher in the water column. This is a good time to throw spinnerbaits and rattlebaits like his favorite the River2Sea Ruckus.

“An influx of dirty water in the spring moves bass upward in the water column, not necessarily to shallow water,” Murray said. 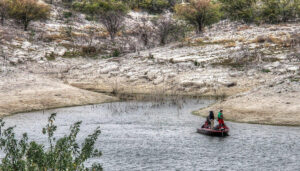 Casey points out that he seldom looks for such fish magnets. Rather, he’s using his electronics to locate bait and determine how the fish are positioning in the ditch.

“That’s the key — finding them with your electronics and then you’ll figure out that there’s a sweet spot,” he said. “A lot of times you won’t even know what it is.

“You’ll just learn that you need to line up with this tree, that’s your cast. There’s no need to go over there and see (the spot) because you’re catching them.”

Now don’t let this lull you into complacency. Even the ideal alignment won’t last forever.

“Those fish will change throughout the day,” Ashley said. “You may get there first thing in the morning and all the fish are related to the bottom. But an hour into it, they may come up and all your fish are going to be suspended in 15 feet of water.

“That’s the most important thing — paying constant attention to your electronics. When you see those arches, that’s where they are.”

Noting the importance of proper alignment and keeping your bait in the ditch, Iaconelli drops waypoints every 30 feet when scouting a spot and uses a buoy for a visual alignment reference.

“In the winter, the lineup and the cast are key,” he said. “Electronics are important, but that $1.50 marker buoy is just as important.”

Follow the drains from the front to the back and intersect the bass somewhere along the way schooling on baitfish in that ultra cool water. The fish are usually in big groups in small spots so it takes time to pinpoint the bait and the bass but when you do, bass fishing can be the finest you’ve ever seen in these ditches.