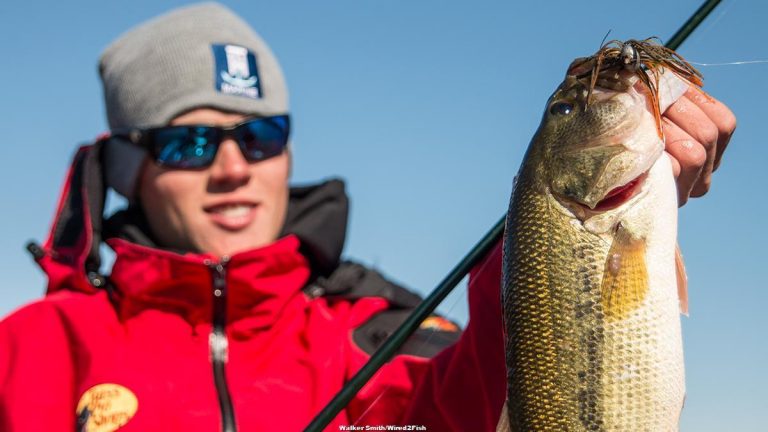 “Finding the bass is half of the battle.”

It’s a popular expression uttered by thousands of bass anglers. Truth be told, it’s a fairly accurate statement throughout most seasons. But all bets are off when winter rears its ugly head. Most of the bass head to deep water this time of year and, while they tend to position in relatively predictable locations, getting these lethargic creatures to bite is often the most difficult part of the equation.

Shallow water “junk fishing”, however, is an effective solution to this coldwater conundrum. Instead of spending hours attempting to fool the deeper, more inactive bass in a fishery, this technique entails finding and taking advantage of smaller populations of more active bass.

Before you get started, there are several things to be aware of.

What is junk fishing?

Simplicity is certainly a key factor when you’re coldwater junk fishing. To fully understand this technique, take a step back in time to your earliest days of bass fishing. When you first started experimenting with this sport, what was your plan of attack? If you’re anything like me, you probably walked the banks of local ponds and threw whatever you could think of at anything that looked “fishy”.

There are some strategic advantages to consider, which we’ll discuss shortly, but the whole idea is to cover water quickly and specifically target shallow bass despite the cold temperatures. It might sound crazy to go against conventional wisdom, but there’s a compelling argument for this method. The bass will be shallow for one reason— to feed. So although they may be fewer in numbers, they’ll likely be much easier to catch.

This strategy can be a viable option for many anglers, especially if you find yourself in one of the following categories.

Warm water is a relative term, especially in the winter months. It’s unlikely you’ll find water that’s tepid to the touch, but it’s important to understand that just a single degree or two can make a monumental difference in your success. This warmer water can attract three very important players— shad, crawfish and, most importantly, big bass.

So how do we find this warm water? It’s not as complicated as it may seem. Concentrate your efforts on sunny banks and specific cover that conducts and holds heat well. 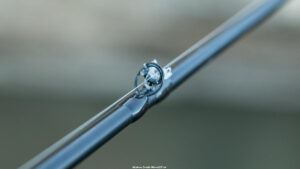 Although coldwater junk fishing is very effective, don’t think that the bass will be cruising the shallows throughout the entire day. This may be true in very specific situations but more than likely, they’re feeding for very short periods before becoming inactive. Remember, bass are very aware of their energy exertion right now, so they’re going to grab a quick bite to eat and get the heck out of dodge.

If you can find one of the aforementioned bottom compositions adjacent to deep water, however, you’ll drastically improve your chances of finding shallow, active bass.

So although we’re targeting shallow water, fishing in the backs of creeks probably isn’t the most efficient use of time. Instead, look for main river banks, main creek banks or channel swings.

Arm yourself for battle 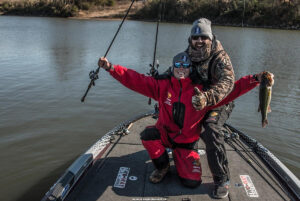 Now that you’re able to recognize high-percentage areas for shallow water junk fishing this winter, you’re left with the fun part— catching them. While specificity and simplicity are most often preferred in bass fishing, this technique can be the polar opposite. Hence the name “junk fishing”. You’re likely to have all of your “junk” scattered about by the end of the day.

Before we get into bait and lure selection, let’s quickly touch on the importance of the aggravation factor. Even when you run across these shallow bass, they may not always be willing to choke on your offering within the first few casts— it’s just the nature of lethargic, wintertime bass behavior.

But when you run across key pieces of cover on which you’d expect a fish to position, repeated casts can force them to react instinctively. Before you assume there isn’t a fish on that awesome-looking blowdown, stump or dock, make several casts. It’s totally possible to irritate them into biting.

Whether you’re not comfortable with deep fishing or you simply despise it, don’t pack up your rods for the winter. Although it’s largely an imperfect science, shallow water junk fishing can be exceptionally effective in the coldest months of the year.