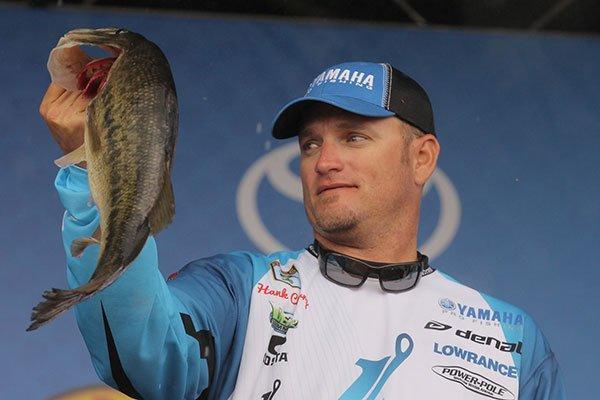 Tournament success is often the quickest way for a new bait or pattern to come to the top of the angling mediaverse. Anybody buy one of those $50 Chatterbaits after the 2006 Classic or a $75 Alabama Rig after Elias smashed the field at Guntersville in 2011?

It makes sense. I get it. In a sport where ounces separate the winners from losers, anglers are constantly looking for an edge and when you see someone shock the field like Elias did that famed October, it’s hard to resist the urge to go out and whip out the plastic.

As compelling as those “rags to riches” bait stories are, they are actually pretty few and far between. Whether due to lack of media attention, or marketing ineptitude by a manufacturer; there are a host of proven, tournament winning techniques that just haven’t resonated as well with the angling “in” crowd.

Red Hot North Carolina Pro Hank Cherry has been a working example of this dynamic for the past year and a half. His finesse swimbait technique has netted him a pair of primetime wins and well over $100,000 since the beginning of 2012, but you probably haven’t even heard of it.

That’s likely due to a combination of lazy tournament coverage and Cherry’s workmanlike attitude toward the kind of success many anglers only dream of.

Either way, it’s about time anglers across the country pay attention to one of the things that has Cherry, a humble North Carolinian, blowing up like a Coosa River Spot during the shad spawn.

Cherry honed his fishing skills on the famed reservoirs of North Carolina. Places like Lake Norman, Lake Wylie, and High Rock Lake. Places that have a lot of bass, but also receive a lot of angling pressure.  That pressure, along with his observations of fish chasing shad far off in the distance, forced Cherry to experiment in order to catch them.

“I’ve been working on the swimbait technique for quite a few years.” Cherry says, continuing “I noticed on our lakes back home that a lot of times you would see fish flipping shad on the surface, but by the time you got over to them they would be gone. I started to experiment with swimbaits and gradually determined that casting distance is the priority. I switched to light line and a spinning rod, and have been throwing it like that ever since.”

All Cherry’s experimentation paid off in 2012, when he won the Bassmaster Southern Open held on Alabama’s Smith Lake in October 2012. Cherry was targeting fish chasing suspended balls of shad and blueback herring from long range. “At that Smith Lake event, I could see fish feeding all over during practice, and I got pretty excited because I fish that kind of stuff all the time back home. If you could get that swimbait out to them, they would come up and eat it.”

Like in the Smith Lake event, Cherry most often fishes his swimbait on a spinning rod because it provides him with the casting distance to reach pressured fish before they can sense the presence of a boat.

Seasonally, Cherry has found his greatest success with the finesse swimbait from fall all the way through winter, although it can be effective any time fish are predominantly keying on shad. “I think of it as a fall or winter presentation” Cherry says, “But I’ve caught them on it at other times of the year when they are actively chasing shad. I just think that is a lot more frequent once the water temps start dropping.”

Cherry prefers the Damiki Anchovy Shad for most of his swimbaiting. The anchovy shad is a diminutive 4 inch bait that swims well even at the slowest speeds. Cherry thinks the presentation is so effective mainly because there isn’t really anybody else out there doing it. “Across a lot of the country, there are fish out there in the fall that nobody targets because they get too spooky and unreliable if the shad move. Most places, they have never seen anything like it, so when that little swimbait comes swimming over their heads, they just can’t resist it.”

The specific setup Cherry generally relies on is a 7′ Medium Denali Noirwood spinning rod paired to an Abu Garcia Revo 30 spinning reel. He spools the Revo with 10lb braided line and tips it with a leader of six or eight pound fluorocarbon. About the braid to fluoro connection, Cherry says “That light braid really lets you launch that thing and bury the hook from far away, but the fluorocarbon keeps the finicky fish biting.”

You might think that six to eight pound line may seem a little light, but Cherry actually considers the presentation pretty safe, and he rarely loses or breaks fish off. “Generally, the fish you are catching like this are in open water, or deep water. Once you get them hooked, there isn’t really anything they can do to get off as long as you take your time.”

Cherry doesn’t necessarily consider the technique a true “finesse” presentation, and he throws it even when the fish are biting really well. This September provided a perfect example of that, as Cherry relied heavily on the swimbait during his win at the BASS Elite Series All-Star event held on Michigan’s Muskegon and White Lakes.

In that event, Cherry targeted aggressive largemouth and smallmouth feeding around big balls of bait in transition areas. Because of the varied depth, proximity to cover, and big smallmouth, Cherry actually switched the swimbait to a baitcaster spooled with 15lb fluorocarbon. “I knew with those big smallmouth up in Michigan that I needed to go to a stronger line. They were aggressive too, so I could sacrifice a little casting distance and visibility for the improved line strength.”

Although he was fishing it on heavier line on a baitcaster, Cherry still focused on making casts to fish that were relating primarily to shad, and  not on a piece of structure. “Those fish up at the All-Star Event were moving around areas from 2 to 20 feet of water and just following big balls of bait. I would reel that swimbait through there and they couldn’t resist.”

Although Hank Cherry has won over $100,000 and an Elite Series Event predominantly featuring his unique finesse swimbait pattern, you haven’t seen the tackle industry respond the way it has with other winning techniques. There are several reasons for this.

One, many of the components involved have been around for years. The industry likes shiny, new, and crazy looking. A finesse swimbait on a light jighead doesn’t fit the mold.

Two, it’s a finesse presentation.  In general, the media (and industry) isn’t as wowed by finesse presentations as the power techniques. Things like drop shotting, wacky rigging, and shakey heading have had an exponentially more profound impact on tournament fishing in recent years than the Alabama Rig, but the allure of catching a whole limit on one cast intoxicates all. Plus, conflict attracts attention. When was the last time you heard anglers arguing over whether the neko rig should be banned?

Lastly, Hank Cherry is not a peacock. He doesn’t use his success purely as a means to hock the latest widget from Ronco. That’s not saying that Cherry isn’t a pleasure to work with and that he doesn’t work his tail off for his sponsors, it’s just that he’d rather let his results on the weigh-in stage do his talking than a series of tweets or YouTube videos.

All that said, Hank Cherry is working to bring his finesse swimbait technique into the mainstream the hard way. One win at a time.