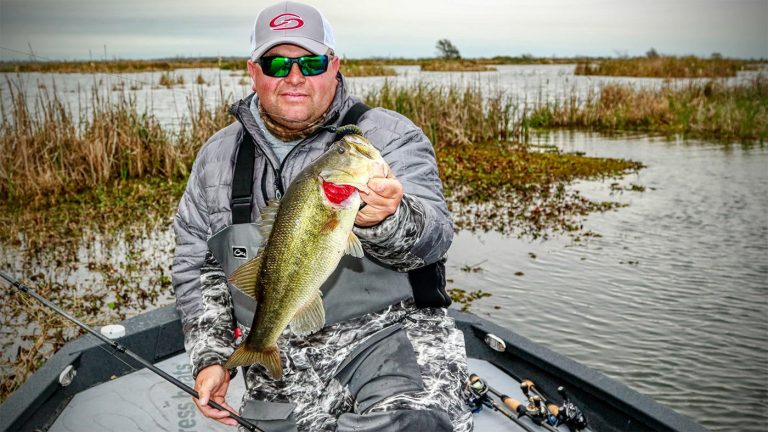 When the fishing gets tough, finding funnel and neck-down areas on a body of water can be the ticket to consistent bass fishing. Finding funnels is also an effective big bass strategy for trophy hunters and knowing how to find and effectively target these areas will make you a better angler.

Foul weather is usually a bummer, but a recent visit to Grosse Savanne Lodge in southwest Louisiana found cold front conditions spotlighting a scenario that’ll produce anywhere you find it. Specifically, my group fished a 480-acre manmade Miller Lake comprising large inner flats surrounded by a network of canals with dozens of cuts linking the waterways.

With 15- to 20-mph winds shoving water through those passages, we frequently found fish stacked in and around what Bassmaster Elite pro Bill Lowen termed “blow-throughs.” As the Indiana angler explained, these areas funnel baitfish through narrow gaps where opportunistic bass capitalize on the easy pickings.

“I think a fish in this scenario is an easy fish to catch because he’s in there to feed,” Lowen said.

That’s good news for anglers, as it’s basically a pick-your-poison deal. We caught loads of solid fish on Strike King Hack Attack Swim Jigs, KVD 1.5 square bills and the KVD Popping Perch. Not to say a slower presentation wouldn’t produce, but the fish in funnels are used to chasing down moving targets, so show ’em what fits the scenario.

Go with the Blow 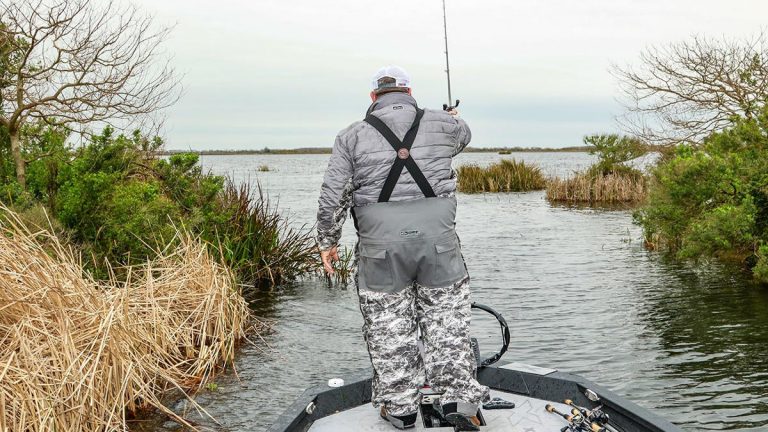 It’s important to play the wind by fishing the down-current sides with presentations that bring your bait through the gap in natural form. Also, be aware that shallow inner areas will warm and cool faster, so the outflowing water will vary in temperature — and often, clarity. Consider the bass’ seasonal needs and fish the areas with optimal water.

“I always try to bring my bait with the current, but if you can’t, then just fish it backwards,” Lowen said. “You’ll have to slow down more because the (oncoming) water will push your bait up if you fish it too fast.”

Upsizing your baits (weight) can help maintain a presentation lower in the water column. 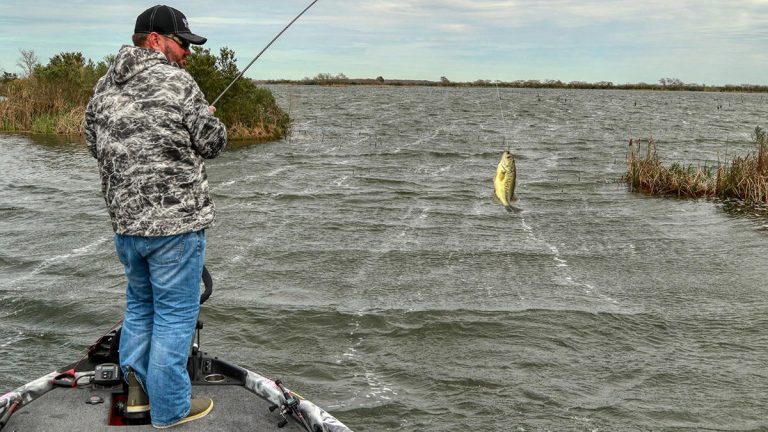 As Louisiana stick Greg Hackney pointed out, early mornings found us faring best from the center of the blow-throughs to the deeper, outer side. Given the chilly overnight lows, that shallow inner pond water had lost several degrees and the fish weren’t having it. Conversely, as days warmed, we often found prespawn fish pushing into the shallow zone, so longer casts to the insides of the passes did the trick. 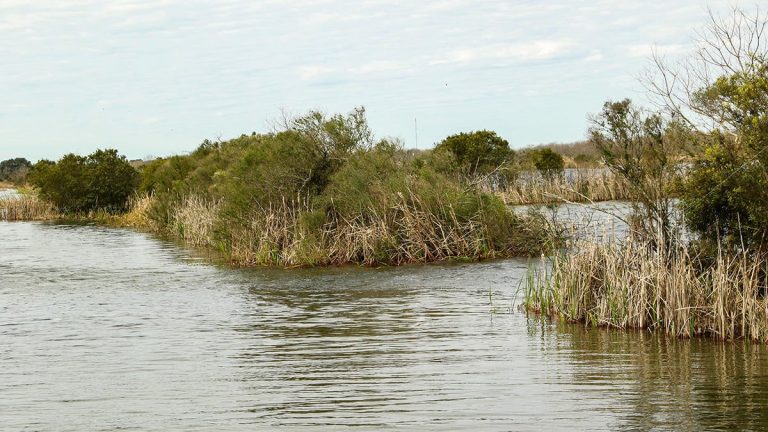 Lowen’s keen to spot clumps of grass, reeds, laydowns, stumps and any point of cover and current break from which bass can more effectively utilize these blow-throughs.

Hackney was quick to key in on the fact that a lot of his bites came near the stakes marking the drop-offs where spoil banks dropped into manmade passes. A general reference point, no doubt, but here and in natural blow-throughs, he wants to locate the juice.

“The current washes little cuts in the grass where those bass will lay and feed,” Hackney said. “A lot of times, it’s a specific cast, so when you get bit, pay attention to your casting angle so you can repeat it.”

Our second morning on Grosse Savanne was your typical cold front stuff with moody skies and that damp, chilly stuff that sends folks to the pharmacy. Well, if we weren’t liking it, I don’t imagine the bass were thrilled, so when Lowen spotted a sizable junk mat flanking the leeward side of a spoil bank, he knew just what to do.

Pulling out his flipping stick, he sent a Strike King Rodent rigged on a 5/0 Hayabusa flipping hook with a 1-ounce Reins tungsten into the darkness. It only took three shots to find a taker.

“Typically, anytime you’re dealing with a grass lake, those fish have a tendency to gravitate to the thickest cover they can find,” Lowen said. “That stuff holds heat; it may only be a degree or two more, but it’s enough to attract fish.”

So, look around your areas and where you find wind or tide-born current piling through a narrow gap, you can bet there’s a pile of hungry fish leveraging the buffet on the nearest cover.