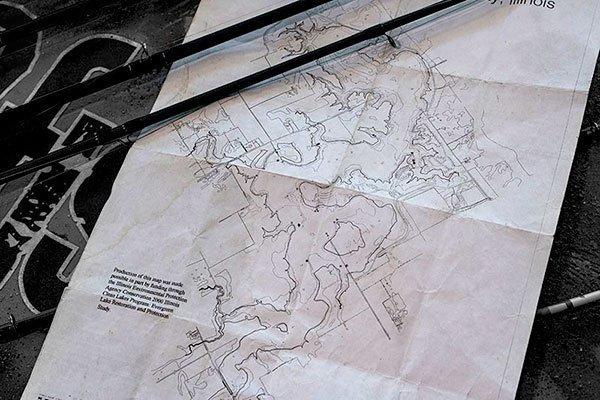 I recently had the opportunity to spend a day on the water with Elite Series pro and Western veteran angler John Murray. I took him to a body of water that he had never seen before and really took him out of his element. Murray is a Western angler, based out of Phoenix, and the waters he normally fishes are much different than the flat land lakes in the Midwest. It was interesting to watch him scan the lake and surrounding back line and the lessons learned were invaluable about attacking new water. Below is a Q&A from that trip.

W2F:- This is your first glimpse of this lake? What do you see and where would you start?

Murray: Flatland lakes are entirely different that West Coast lakes for numerous reasons. The surrounding topography doesn’t give you an idea of what lies below the water. Electronics are critical on a lake like this, and the first thing I would do is drive around a bit and look for flats. On any new lake, flats are where the most fish live and migrate to and from. Looking for little things on the flat like stumps, rock piles, holes and small edges can be magnets for bass. I can’t tell you how many times I have done well by fishing flats and dissecting them with my Lowrance electronics.

W2F: When you say “flat” what do you mean exactly? Are you talking about big flats on the main lake or small ones?

Murray: I like to start on large flats and find the sweet spots and then try to mirror that on others. If fish are holding on big rocks on the big flats they will probably be in like locations on the smaller ones too. There is a larger population of fish on larger flats normally, and I love the ones with breaks on them. Ninety percent of the flats I target are bigger and I seek out ones that don’t go deeper than 25 feet at the deepest point.

W2F: What are your go-to baits for flats?

Murray: I will start with a vibrating jig in the shallow areas and a topwater if it’s warm. My choices vary based on what the fish want.  Some guys like crankbaits but I am a football jig guy and feel like I can be more precise with them.

W2F: What conditions do you like best on a flat?

Murray: Wind is crucial. Just like we saw today, when the wind quit blowing the fish quit biting. A breeze seems to get them going better especially shallow on the break from shallow to deep. Flats are like restaurants and more fish use them to feed than other places on the lake.

W2F: We looked at several long points off a large flat and they really didn’t have many fish. Any idea why they were not using them when conditions favored them being there?

Murray:  I can’t tell you why for sure but some very long points seem to be too far from the bank and bank oriented fish don’t roam out that far, especially if they are barren of structure and cover. It really depends on the lake, but I have seen that before all over the country. Shorter points that run to a creek channel or come off the bank seem to be better than very long shallow tapering ones even with a good drop on the end. They have to have a highway to food and those type of points may just be out of their comfort zone.

W2F: During the day, do you move a lot around the flat or try to stay in the sweet spot?

Murray: Bass move a lot on the flats, in particular when there is a bunch of boat traffic, but once I have found the best places, I try to  be thorough and move accordingly. I am known as a pretty good drop shot guy on the Tour and love to fish deep but will work very hard with a football head on the best spots too. Love throwing that jig.

W2F: What are the tools you use before you get to a lake?

Murray:  One other thing — my Lowrance electronics and a good topo map are keys to these spots too. Researching these areas before you get to the lake can be a huge advantage too. Don’t get set in your ways, but flats hold the most fish, and they get most of my time.