Dense Grass beds, expansive pad fields, forests of standing timber; it’s tempting to think “I’ma get all up in that stuff,” but often is the case where working the outer edges, if not the perimeter waters is the way to go.

As with all things hook-and-line, this premise falls under the case-by-case guidelines; as in, seasonal specifics will play a central role in determining fish behavior and your best engagement strategy. For our purposes here, let’s look at a few examples of when and why you’d want to stick to forgo — or, at least, delay — the thick presentations, in favor of prospecting the outer ranges.

Right off the bat, we have to point to fishing pressure as a manmade influence that can push bass to the edges of thick cover. Take any community hole grass mat and a tournament’s first day or two might find several folks plucking fine limits from the inner sanctum; but all good things must come to an end.

No matter how big or how fertile the mat may seem, it’s unlikely to continue producing consistency once you’ve had a couple tournament days (plus all the practice time) with trolling motors and pressure wakes disturbing the fish. Move to the edges and you might find better fortune.

Sizing up the opportunity 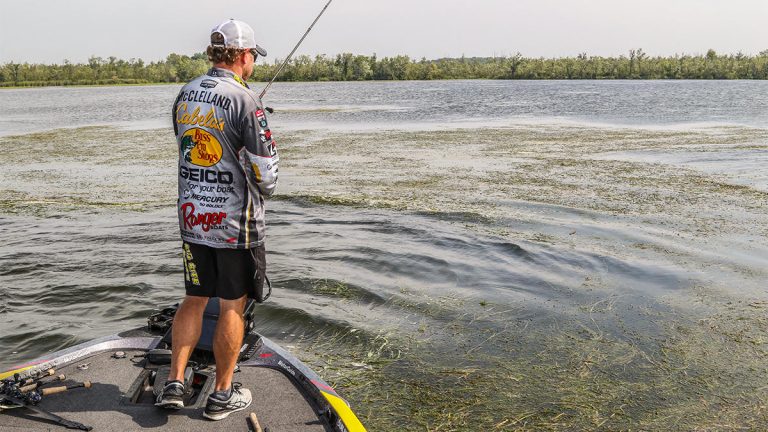 For Mike McClelland, avoiding the thickest of the cover isn’t so much about lack of confidence in its potential; rather, it’s simply a matter of time management.

“Any time you get into a lake flooding and you have massive amounts of bushes or willow trees or whatever the available cover might be, my goal first and foremost is to find the most isolated cover that I can get to,” he said. “I want to give myself the best odds of knowing that when I pitch by a target, there ought to be one there; rather than picking my way through hundreds of bushes for scattered bites.”

So, not only does he avoid wasting time on large areas of less productive cover, McClelland can afford to spend more time on what he believes are the prime spots typically staked out by the bigger, more aggressive fish.

“Stacey King told me years ago, one of the biggest problems a lot of us anglers make is that we fish too fast to catch big ones,” he said. “Big ones are lazy; they don’t want to work hard to eat and I definitely believe that isolated targets aren the perfect place to catch big ones because they want to be able to set up be something that gives them security to feed without a lot of effort.”

McClelland said the sweet spots could vary from day to day and, at times, it’s a matter of determining if the fish are lovin’ the hardwoods or some other type of cover. On a weedy flat with a dominant grass mat interspersed with patchy of pads, reeds or even a different type of grass – coontail patches amid mostly hydrilla – those outliers can be the golden ticket.

Notwithstanding the notion that isolated spots tend to interest the heavy hitters, any change in cover distribution, be it live vegetation growth or standing timber, generally relates to the kinds of bottom variations that influence fish movement. McClelland keeps his eye on his Garmin Panoptix, but surface level observations only strengthen his recon.

“I break down the bushes, trees, grass, whatever it may be just like I would the natural contours of the lake,” McClelland said. “I’m going to fish the ditches, the points, the pockets; rather than just going down a long, straight stretch of bushes or willow trees. I’m going to pick out the irregularities.”

Other factors to consider

Pad perspective: Bass legend Larry Nixon always views a pad field as bass-friendly cover, but he knows the game isn’t always deep inside. On windy days, particularly during the hotter months, a pad field’s deep edge offers the equivalent of an air-conditioned lounge, as waves gather oxygen and combine it with the plants’ natural output. Baitfish dig, bass dig it.

Also, take a peak toward the back of your pads to see if they grow right to the bank. Often, you’ll find a ribbon of inhabitable depth between the pads and the bank where a few chunky ones might set up shop. Feeling pretty secure with a wall of greenery in front of their noses, these fish generally go unmolested, so they usually respond aggressively to well-placed baits.

And if you’re fishing from shore, these little gems can offer an easy shot at glory. The key, of course, is that stealthy approach. Hit it with a long cast to see if you can, at least, get one to move and then target accordingly. An unweighted Senko can be deadly here.

Current candy: When those hydroelectric generators kick up and water starts moving, the reservoir’s fish will move to key feeding areas. Often, that means emerging from the thickest areas of grass or wood to position on the points, cuts and turns where they have just enough cover to feel good about themselves, while sitting in prime belly-filling spots.

Same deal goes for those spatterdock fields clogging the mouths of side creeks. Sure, you could conceivably find a bass pretty much anywhere, but the aggressive ones know their best deal awaits on the edges where food passes closely.

And don’t overlook wind current as a player here. When deeper cuts divide massive grass fields into separate chunks, a blustery day turns those dividing lanes into funnels. Tracing the edges with a frog, swimbait or bladed jig is a good way to get your elbow dislocated.

Laydowns figure here, too; and with dual logic. First, Russ Lane says you can expect the most aggressive fish to position high in the tree’s outer reaches when they’re ready to feed (river current, or tidal), so peppering the perimeter and gradually pressing inward is a good bet.

“This is true in conditions that are conducive for a larger strike zone – wind, clouds, early morning or low light conditions,” Lane said. “Also, when you’re using a brightly colored bait that would get a fish’s attention from a farther distance to draw them out of the cover to bite.”

But even if current’s not a significant factor, you’ll miss a lot of opportunities by going straight to the trunk. Some will say that’s where the biggest fish hold and maybe there’s some logic there; but the commotion of tangling with such a fish – successfully, or not – will likely spook all the neighbors. Working outside-in, at least, gives you a shot at fish in various positions.

Light show: Jason Christie offers this grass bed insight: “A lot of times, at daybreak, those fish won’t be in the mat; they’ll be roaming around the perimeter,” Christie said. “They’re talking advantage of that low light to chase shad out in the open. Once the sun gets higher, they’ll move back into the mat.”

You’ll find the same behavior around standing timber, especially on lakes with blueback herring, where chasing those meaty meals is a day-starting opportunity the bass won’t miss.

With any such scenario, consider the impacts of sky conditions. Bass are accustomed to those early and late feeding periods because that’s what typical photo periods permit. However, cloudy or overcast skies – maybe approaching frontal systems, or the tropical mayhem common to the southeast – will extend the perimeter game.

Not to say you won’t find a few creatures of habit that simply follow a daily schedule and return to the thick stuff even without solar prompting; but that doesn’t mean you have to follow suit. Fish the conditions, not the clock.

On the fall: From flood water fluctuations to the daily ebb and flow of tidal fisheries, declining depths inherently squeeze fish out of draining vegetation; but there’s more at play here than compacting habitats. Grass and other shallow vegetation filters falling water, so whether it’s the predicable tidal action or a declining flood waters, expect heightened opportunities where that cleaner zone emerges.

Seasonal breakdown: Looking ahead to the fall season, the grass mats that will provide cozy post-spawn through summer digs will eventually start to fragment. Even with plenty of interior density remaining, ragged edges will continue thinning and, before long, you’ll have a patchwork of isolated grass clumps stringing the perimeter.

This is presents a dangerous gauntlet for reaction baits like swim jigs, bladed jigs, buzzbaits and spinnerbaits; but those mat fragments also help the flipping bite. Treat each one like a stump and you’ll often find yourself pleased with the results