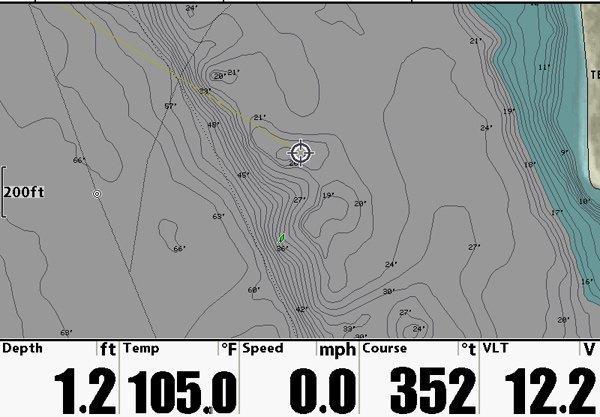 We talked about a recent tournament experience this week because we felt many anglers could relate to the elation of finding a hidden treasure of a spot and having the fish cooperate in tournament situation. The other part of that story is how you find a spot like this. Is it random? Is it luck?

We love fishing, but the only part of it that we believe is luck is the size of the fish that bite.  The best spot on the lake may only have 3-pounders on it on certain days or times of the year. Sometimes the fish won’t bite at all on the spot. But the fact is a certain spot might be capable of producing 25-pound limits when the conditions get right. So seeking out those spots is the mission of all anglers.

This week using map study, side imaging, GPS and myriad of presentations, we were able to maximize the potential of a great spot to win a local tournament. But we realize most anglers just want to know how they go about finding hot spots on their lake.

We certainly don’t claim to have all the answers just because we had one good catch on one night. But having spent thousands of hours on the water does make someone like pro Terry Bolton an expert on the subject. Bolton has made a living fishing tournaments and is widely regarded as proficient at finding schools of bass away from the bank.

“Less than 10 percent of the spots you find are truly capable of producing big limits of bass,”  Bolton said. “You can go out and look at a lot of stuff on your fish finders and fish and not catch anything. I have tons of things marked on my GPS that look incredible and look like they should hold fish, but they are missing one or two ingredients that make it a honey hole.”

More than anything, anglers need to understand a great spot is not because of any one thing. Rather it’s the combination of many things.  We’ve long known that bait, structure and cover all play vital roles in finding fish and that presentation plays a vital role in catching the fish. For now we’ll stick with the finding part of the equation.

Bolton has fished Kentucky Lake for 30 years, yet he still carries and frequently looks at paper maps of the lake. And amazingly enough, he still stumbles on places that look right to him on the map only to find a school of bass there when he gets to the spot in his boat.

“I look for three things,” Bolton said. “I want to find the biggest creek or bay on the lake because I know that bay will always have a population of bass that live there. Whether they are actually in the bay or out in front of it on the main lake, those fish stay close to that bay. The other thing I look for is some sort of creek system cutting across main lake flats. And finally I look for the major flats on the lake.”

Once he finds the spots he wants to explore, Bolton starts with the most obvious looking spots in the area. So if there is a creek cutting across a big flat, and it makes a turn or empties out into a main river channel, he’s going to start on the corners formed by the turns and connections in the creek system. From there he expands out and will idle long straightaway’s, up on top of the flats or across the creeks, looking for key features, whether those are ditches, rock piles, high spots or something else that adds another element to give a spot more potential.

One of the most important things Bolton has found is where a spot is. That sounds a little vague but he’s literally marked some of the best looking spots on the lake that he’s never caught a bass off. The spot has a good depth change, a substantial piece of cover, good clean hard bottom but he’s never found fish on the spot. How a spot faces, especially in a current oriented fishery, can be as important as what is on the spot to hold bass.

The Introduction of Side Imaging

“Some of my very best places where I’ve had some of my biggest limits didn’t look that impressive when I finally went back and looked at them with Side Imaging,” Bolton said. “Truth is, the way the spot faced the current was more important that what was on it. That and bait and bass liked to get there.”

For my tournament partner and me, Tuesday night was about finding one key spot.  We were able to do that with the Humminbird 1197c SI unit.

“Side Imaging hasn’t really changed things for me, because I’m still pretty old fashioned,” Bolton said. “But what it has done is made what took me five years to perfect something that a guy can now learn in about a year.”

Side Imaging makes seeking out productive spots more efficient. While I was scouting out the spot on Tuesday for the tournament, I thought it just seemed so much easier and gave me just a bit more confidence in what I was fishing. Then after catching a huge limit on the spot, I’m not sure I’ll look at my sonar much anymore.

That’s how much confidence I have in side imaging technology after just a week or so with it on the boat.

But it’s not the only reason we caught the bass like we did Tuesday. Our spot had all the features of a great spot and as Bolton said, it was in the right place. The spot had a good clean hard bottom, with some large rocks on it. It was near where a small feeder creek that met a river channel, and it faced the right direction with a few scattered stumps to sweeten the deal. Besides that we marked shad the whole time we fished around the area. When you put that many aspects in one small area, you’ve locked on to a goldmine.

Bolton cautioned me though. “You could have pulled up on that spot and not caught anything,” he said. “But I always tell guys, don’t write those spots off. Just because they aren’t there one month or one season, doesn’t mean the fish  won’t be there later. The key is to remember those great places and check them periodically.” 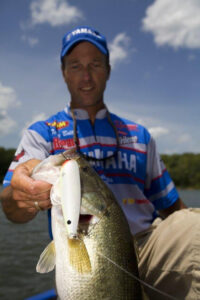 The final piece of knowing the potential of a spot comes with seining the area with a variety of lures and presentations.

Bolton recommends at least three presentations on a potential honey hole.  And to not settle on one angle until you pinpoint the right cast. Sometimes he’ll use as many as six presentations before leaving a spot he feels has the potential to be great. He’s also a big advocate of making physical line-ups once you catch a bass.

“GPS will get you close, but if you ever have GPS problems or it’s slow to update, you can be missing the fish by just a few feet,” he said.  “With a physical line-up of one object lined up with a more distant object, you can be sure you’re making the right cast every time.”

Once you get good at lining up your spots with two different line-ups in two different directions, you won’t even have to throw buoys anymore. Bolton recommends using objects that don’t move like trees, high spots on the horizon, towers, permanent docks, houses, etc. Using things like boats or buoys aren’t good as those things often move.

The fact is every fishery has a few honey holes that given the right conditions will produce unbelievable fish catches. This, however, represents less than 10 percent of all the productive spots on the lake. So for every 10 spots you find that hold schools of bass, only one really has the potential to hold an incredible catch. Adding as many factors into one small area as you can often leads to stumbling onto the mother lode of bass.

The best advice a guy can give someone wanting to find these spots is to study your map, fine tune exactly what is in the area with your electronics, use your GPS and physical line-ups to be sure you’re covering the key angle on the spot, and then seine it with a variety of lures and presentations.