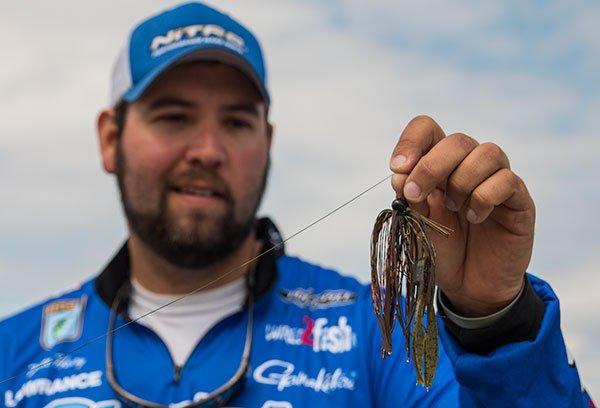 Regardless of the body of water or season, fishing points for bass is a likely way to enjoy quick success. These structures provide bass with a multitude of benefits that prove essential to their survival including feeding and ambush opportunities, easy access to both shallow and deep water and practical staging areas during their various seasonal migrations.

Because each pointâ€”and bass, for that matterâ€”is different, it’s important to understand the different approaches for dissecting them. Georgia fishing guide and BASS Opens pro Matt Henry relies on points regularly and has continuously demonstrated his thorough understanding of their intricacies.

According to Henry, there are five effective ways to fish points.

Focus on the easiest fish first

This is perhaps the most popular way to bass fish points and for good reason. Whenever Henry starts looking for a productive pattern on points, he positions his boat in deep water and casts on top of the point.

“I start by casting from deep to shallow water the large majority of the time,” Henry said. “This approach allows you to utilize stealth and avoids spooking shallow bass. You’re able to make super-long casts on top of the point without getting right on top of the fish. They won’t hear your trolling motor or notice anything out of the ordinaryâ€”they’re totally oblivious to your presence which gives you a huge advantage.”

This method also allows him to target the “easiest” fish first. Because bass frequently use points for feeding opportunities, the shallow fish he’s targeting are there for a very specific reason.

“If the fish are positioned on the shallowest part of the point, they’re going to be aggressively feeding,” Henry said. “They’ll slide off the edges of the point when they’re inactive, but when it’s time for them to eat, they’ll infiltrate the shallows and gorge themselves. This makes them extremely easy to catch because if your lure gets within a few feet of them, they’ll crush it more times than not.

“If you get a few bites with this technique, make a concerted effort to duplicate the pattern throughout the fishery. It’s a great way to catch bass quickly and it doesn’t take long to thoroughly saturate a point, allowing you to cover and eliminate water at an astounding pace. If you don’t get a bite within 10 or 12 casts, simply move on to the next one to continue your search.

Although it was a very popular and effective technique years ago, casting from the shallow part of a point into deeper water is largely overlooked in modern bass fishing. Failing to utilize this approach can cause you to miss out on incredible fishing action.

“In the early spring, I really like to keep bottom contact with whatever lure or bait I’m using,” Henry said. “If you Power-Pole down on top of a point and cast to deep water, you can cover a multitude of depth ranges while maintaining bottom contact throughout your entire cast.”

During the prespawn period, bass are well known for positioning close to the bottom on many fisheriesâ€”especially in areas with a hard bottom composition. This hard bottom is advantageous to them for two very specific reasons.

“This time of year, bass rely heavily on hard bottom areas to increase their body temperatures,” Henry said. “They’ve been dealing with a long, cold winter and they’re ready to get warm and active. In addition to the warmth, bass love to eat crawfish in the spring months and keeping crawfish-colored or crawfish-shaped baits in contact with the bottom will fool some giant prespawn females.”

Targeting the sides of points can be an excellent remedy for inactive bass and slow fishing action. Points allow bass to move vertically throughout the water column while exerting very little energy. The more active bass will generally be found on top of points in shallow water while the inactive, less aggressive bass are prone to position themselves on the deeper sides of points.

“First and foremost, I like to dissect the side of the point with the steepest drop,” Henry said. “Most anglers know that tight contour lines on your Navionics map are indicative of steep drops, but these lines can also be dead giveaways for hard bottoms, such as chunk rock or gravel. If you can find a hard bottom on the side of a point, you’re sitting pretty.”

When fishing the sides of points, keep a close eye on the currentâ€”regardless of whether it’s wind or river-generated. The direction of the water flow can give you a good idea of what side to focus on first.

“I catch a lot of big bass by targeting the up-current side of points,” Henry said. “When there’s no current, you can graph these areas and see a few scattered fish, but the presence of current really stacks them up and makes them much easier to catch. They’ll just sit there and wait for food to be pushed toward them.”

If you find the bass relating to the sides of points, don’t discount the down-current side, either. In heavy current situations, they’ll often sit in the eddy created by the point. This lets them save energy by avoiding current and also gives them a prime hiding spot from which they can ambush unsuspecting prey.

The wind is your friend

The next time you encounter a bunch of wind while fishing, don’t tuck yourself away in a protected cove to avoid it. Whether you love it or hate it, the wind is definitely your friend when it comes to fishing points for bass.

“Wind positions fish into very predictable places, especially when they’re relating to points,” Henry said. “I don’t know if the wind really pushes the bait or bass around necessarily, but it stirs up the water and increases its oxygen content, resulting in extremely aggressive feeding behavior. You can fish calm points all day and only catch a few, then idle across the lake and catch 15 on a single, windblown point.”

In addition to acting as a giant, neon sign pointing toward active bass, the wind also makes it easier to fool nearby bass. 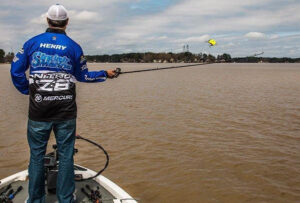 Henry makes long casts into the wind and cross-current to give bass plenty of time to react to his crankbait.

“With the wind churning up the water, bass aren’t able to detect small, unnatural characteristics in your lures,” Henry said. “In calm water they’re much more likely to see your hooks, line or split rings, but the increased surface disturbance acts like camouflage and breaks up the profile of your lure. Quiet casts aren’t nearly as important, either. You can land right on top of their heads sometimes and they won’t even know it.”

To increase your chances of success, Henry suggests casting into the wind when possible. It may be a little aggravating at times, but it will pay big dividends if you’re able to stick with it.

“Wind generates current and bass face up-current whenever possible,” Henry said. “When you cast with the wind, you’re probably bringing your lure from behind the fish, giving them a very small window of opportunity to actually detect and eat it. If you can cast into the wind, those bass will see your bait coming and have much more time to react to it and chase it down.” 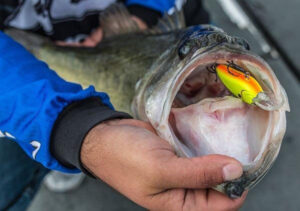 Henry caught this healthy bass by casting cross-current on a main lake point.

Although he prefers to make casts into the wind in most situations, Henry has a little trick up his sleeve that has resulted in numerous tournament-winning fish for him over the years. Before he leaves each point, he changes his boat positioning and casting angles in order to keep the bass honest.

“There are times when casting cross-current to points is very productive,” Henry said. “Every situation is a little different, but you’d be surprised by all the extra fish you’ll catch by changing your casting angle before moving to your next area.”

Casting cross-current also gives the bass a great opportunity to see your lure. Assuming they’re facing up-current as they tend to do, this angle will give them a wide field of view as your bait crosses in front of their faces.

“I’ve pulled up on a lot of points before and have only been able to get bit casting cross-current,” Henry said. “I think it gives them a much better view of your lure while also giving them plenty of time to react to it. If you try this approach next time you’re out, you’ll pick up a few bonus fish.”

So many anglers get into “robot mode” when fishing pointsâ€”try not to do that this year. Limiting yourself to only one approach will severely hinder your success, so do different things. If you can remember these different techniques, you’ll be shocked by the results. 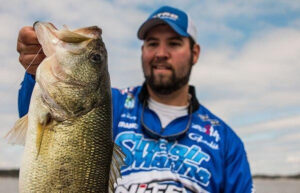